The party learns from Jyscal's sphere that Seymour had killed his father to succeed him as Maester. Yuna, who has already prayed for the fayth and obtained Shiva, wishes Seymour would turn himself in for his crime, but they are forced into battle and Seymour is killed. Before Yuna can perform a sending, his body is taken away by Tromell, who brands Yuna's party traitors for killing a Maester. The party escapes the temple with the Guado guards in pursuit and fall through the ice after a battle with Wendigo, landing onto a dormant Sin that whisks them away.

A series of puzzles involving ice, the Destruction sphere of Macalania is needed to get Anima in Baaj Temple. What makes this temple unique is the fact that the trials are completed when leaving the Chamber of the Fayth after receiving the aeon.

Dark Shiva is an optional boss in the International, PAL and HD Remaster versions. She guards the entrance to Macalania Temple when the party returns there after defeating Seymour Natus. Following the battle, Tidus is followed and ambushed by Guado Guardians like when Seymour was first defeated. After escaping the Guado the temple can be revisited, except in the HD Remaster version, in which the player must first visit Bevelle for the second time before the Guado leave the temple for good.

Appears after viewing Jyscal's Sphere in the Nuns' Chamber.

Occurs during both escapes (after defeating Seymour as well as Dark Shiva). If Dark Shiva is defeated without obtaining the airship, the random encounters will continue to occur.

In Final Fantasy X, when Tidus mispronounces Macalania Temple's name in Guadosalam in the English version he calls it "Macarena Temple" in the reference of the popular song by Los Del Rio, "Macarena". In the Japanese version he instead calls it "Malacania Temple".[1]

0-slotted Longsword for Tidus is a missable weapon. It becomes lost after visiting Macalania Temple as the player can no longer return to the Macalania travel agency.

"Out of the Frying Pan" 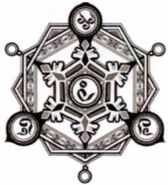 The entrance to Macalania Temple.