Mac's Ship (マックのふね, Makku no Fune?) is a location and a transport in Final Fantasy Mystic Quest. Initially shown during the second part of the game in Aquaria, it is the sailing ship of Captain Mac. Sometime prior to the game, Mac went sailing for further information on the Prophecy, learning of the Dark King and his command over the Vile Four that plagued the land. However, likely due to the Vile Four, the river dried up upon his return, leaving him stranded on a ledge over a deep valley.

Mac's ship becomes accessible after blowing a hole in Spencer's Place, allowing the water from Aquaria's lake to replenish the dry lake while Mac's Ship washed ashore at the dock. The ship was infested with monsters, but Benjamin and Reuben were able to rescue Mac from below decks. The monsters flee shortly after, allowing Benjamin to sail the ship to the entrance to Doom Castle.

Mac's Ship is the only dungeon in the game without a boss.

The two sellers only appear after rescuing Captain Mac and they are located on B1 on the lower part of the ship. 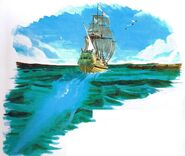 The deck of Mac's ship.

The first basement of Mac's ship.

The second basement of Mac's ship.

Battle background of the deck.

Battle background of the interior.