Sector 1, Sector 8, Church in the Slums

The MP is an enemy in Final Fantasy VII. They are easy enemies to defeat and use their two attacks equally, neither being powerful. Due to their low stats, MPs can be killed in one hit, either by normal attacks or magic.

A pair of MPs is encountered in the Sector 1 as the first enemies fought in the game. In the full releases only Cloud (called EX-SOLDIER) appears during this fight, but in the 1996 Demo release, Barret and Aeris join him, despite Barret having already left and Aeris not having been encountered at this point. The guards also appear differently before the battle; they are a darker blue, with their masks' features less visible, and their name is Security Troops rather than MP. In a later demo version, Cloud fights this battle alongside Tifa.

Turn
If (Self is on the front row) Then

1/2 Chance: Use Tonfa on random opponent

1/6 Chance: Use Tonfa on random opponent

MP from Final Fantasy VII appears as an enemy.

MP from Final Fantasy VII appears as an enemy. 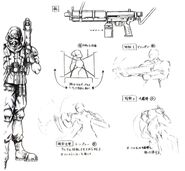 The game's first battle is against two MPs.

[view · edit · purge]Military police (MP) are police organizations connected with, or part of, the military of a state.