Deals non-elemental damage to all enemies with a level that is a multiple of 4. Ignores Split Damage.

Casts Flare on enemies whose levels are divisible by 4.

Level 4 Flare (レベル４フレア, Reberu 4 Furea?), Lv.4 Flare and Lv 4 Flare, is a Lore spell from Final Fantasy VI that deals non-elemental magic damage to all enemies whose level is a multiple of four. It can be learned from Trapper, Apocrypha, Devil, and Dueller. It costs 42 MP to cast, has a spell power of 66, ignores defense, and no split damage.

Bosses who are vulnerable, but can never be used against them will not been listed below, such as Vargas.

There is a total of 74 enemies that can be damaged by Lv.4 Flare are as follow: 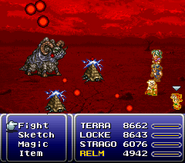