[command abilities and skillsets if specific to characters in the game]

[the weapon type they can equip, provided as a section link to list page]

[the armor type they can equip, per above]

[if the original appearance is different to this one andis from a different subseries]
Prince Luzaf of Ephramad (ルザフ, Ruzafu?), also known as Luzaf the Blackheart, is a non-playable character and one of the primary protagonists of the Final Fantasy XI expansion pack Treasures of Aht Urhgan, appearing in several mission cutscenes. He is an undead Elvaan Corsair and has forged a pact with Odin to exact revenge against the Empire of Aht Urhgan.

Luzaf is a young Elvaan male with black eyes, dark skin, thick black hair held together by an ornate brooch, as well as gold earrings in both ears. He wears a more ornate variant of the Corsair Artifact Armor: a black and purple coat with golden highlights on the collar, a red jacket with a pink jabot and golden ornaments, white trousers with black embroidery, white gloves and black boots with gold decorations. He uses a rapier and a jambiya-type dagger as weapons, as well as a hexagun.

Brave, intelligent and charismatic, Luzaf is both an apt ruler and a successful military leader, judging by accounts of his personal history. When he is first introduced he appears wholly bent on revenge. This gives him a grim and ruthless edge, as he relishes the prospect of finally destroying Aht Urhgan. However, meeting Nashmeira softens his anger. He begins to be cautiously hopeful that a different outcome to his situation may be possible, and that he might restore his homeland with her help. It is suggested that he develops more than friendly feelings for her.

Two hundred years prior to the events of Final Fantasy XI, Ephramad was a prosperous naval power in the Near East in the region of the Arrapago Islands. Disputes over territorial waters with the Empire of Aht Urhgan led the latter to form an alliance with the Mamool Ja and invade Ephramad. The attack was devastating, and the nation fell in a mere eight days. Luzaf, who was then studying in Bastok, received the news of the disaster as he was returning home. Rallying the remnants of his fleet, he established a provisional government in the Arrapago Islands and began a resistance movement against Aht Urhgan, using guerrilla warfare. This was the origin of the Corsairs.

Luzaf's ship, the Ebony Queen, was fitted for war and renamed the Black Coffin (also known as the Ashu Talif), and he led the rebellion as the admiral of the Corsair fleet. For a while, the rebellion was successful, as Aht Urhgan struggled to retain control of the seas. Eventually, the Emperor decided to lay a trap, and ordered the court alchemists to unleash Lamiae in Arrapago Reef. They bewitched and slaughtered a great number of Luzaf's men, allowing the Empire to strike at its advantage.

Eventually, the Black Coffin was the only Ephramadian ship left, and, despite the crew's best efforts, was sunk. As he was about to drown, Luzaf invoked Odin and forged a pact with him: in return for being allowed revenge against Aht Urhgan, he agreed to become Odin's host if Alexander should manifest itself again (their previous confrontation destroyed the Alzadaal civilization and was known as Ragnarok).

Two hundred years later, as Aht Urhgan is plagued by incessant Beastmen attacks, Razfahd, the Grand Vizier, puts in motion his father's plan of reviving Alexander. Sensing this imminent reawakening, Odin brings Luzaf and his crew back as Fomor, and soon, rumors spread about the return of the Ashu Talif. Catching wind of these rumors, Empress Nashmeira becomes curious and decides to investigate the matter under her alias of Aphmau, with only her Automatons, Mnejing and Ovjang as support.

Luzaf, who has allied himself with the Mamool Ja, orders Ovjang to be kidnapped, so that he may study its mechanisms in case they prove useful in his struggle. Nashmeira and Mnejing attempt to rescue him by following Luzaf as he teleports to his ship, but end up as captives themselves.

Appreciative of the young woman's courage and spirit, and believing her to be a simple Puppetmaster, Luzaf explains his plans to her and reveals that Razfahd is attempting to revive Alexander. Nashmeira finds this difficult to believe. She argues that the current people of Aht Urhgan are innocent of what was done to Ephramad, and wreaking revenge against them makes no sense. When Razfahd scours the Arrapago Islands to find her, she asks Luzaf to confront him and demands answers. He confirms her fears and explains that he deems her too young and naïve to be a good ruler. This reveals her true identity to Luzaf, who, seeing this as the perfect opportunity to wipe out the ruling family of Aht Urhgan, summons Odin. However, he changes his mind and prevents the deity from fully manifesting, the strain making him lose consciousness. Nashmeira rushes to his help and returns to the Black Coffin with him.

When Luzaf regains consciousness, he finds himself agreeing with Nashmeira's viewpoint. She says that he had better try to rebuild Ephramad rather than destroy Aht Urhgan, but he fears that Odin will not be as understanding. She urges him to try to break his pact with the deity, and they travel to the Hazhalm Testing Grounds to confront him. Odin refuses to even hear Luzaf out and states that he will become his host, whether he wants to or not, before disappearing. Luzaf tells Nashmeira that they should destroy the Automaton body Razfahd is constructing for Alexander themselves to prevent a second Ragnarok from occurring.

Razfahd has tracked them down and arrives with a squad of Immortals to capture Luzaf. He states that Nashmeira has betrayed her country by consorting with him and therefore no longer has any authority, but lets her escape while he takes Luzaf into custody. He then proceeds with his plan to revive Alexander, dismantling Mnejing and Ovjang to complete his Automaton.

Nashmeira instructs her mercenary (the player character) to rescue Luzaf, while she attempts to reason with her brother, who has traveled to Nyzul Isle (the ruins of Alexander's previous body) to set his plans in motion. Her efforts prove to no avail, and Razfahd takes control of the Automaton himself, thinking that this will also allow him to control Alexander. However, the deity is too powerful, and Razfahd is overwhelmed. Knowing that it is partly based on Mnejing and Ovjang's mechanisms, Nashmeira attempts to gain control of the Automaton, but this backfires, and Alexander kills her.

This enrages Luzaf, who has arrived on the scene after being freed by the mercenary, and he bids Odin to manifest. Razfahd restrains Alexander with a dying effort, realizing that letting him duel Odin would destroy Aht Urhgan. In return, Luzaf restrains Odin and offers him his life in return for Nashmeira's. His prayer is granted, and Nashmeira is brought back for a final goodbye before Luzaf fades away.

After Odin and Alexander are defeated, astral gates are left at the locations of their respective manifestations (Nyzul Isle and the Hazhalm Testing Grounds). Nashmeira and Ghatsad are anxious to find a way to close these gates, so that the deities are no longer able to enter Vana'diel and reenact their struggle. They send the mercenary to investigate both locations. 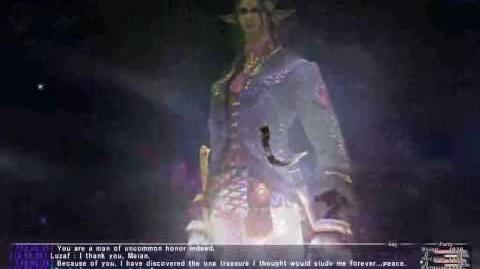 Nashmeira also hints that, if at all possible, she would like the mercenary to find a way to free Luzaf's soul from Odin's control (she does not state this directly, but Mnejing and Ovjang spell it out later). Both Odin and Alexander may be battled repeatedly, and once he has been defeated 13 times Odin will yield to the mercenary's request. Luzaf's soul can be freed, but only if the mercenary agrees to take his place.

If this choice is made, Luzaf appears to express his gratitude. He asks why he has been freed, to which the mercenary may respond that it was a personal request from the Empress. Luzaf then comments that Aht Urhgan and Nashmeira (whom he still refers to as Aphmau) are in good hands, and that he will watch over them for eternity. 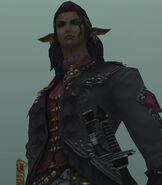