Luxerion Cathedral is the Order of Salvation's seat of power that dominates the city's skyline in Lightning Returns: Final Fantasy XIII. A temple built to honor the god Bhunivelze, where the faithful go to pray on a regular basis, and where Vanille lives under the Order's protection.

The Temple of Light that lies beneath the cathedral is the game's final dungeon.

The Cathedral of Luxerion
Towering over the Luxerion skyline is the grand headquarters of the Order of Salvation.

During the day, a grand hall called the Hall of Devotion is open to the public, and believers come to hear the sermonizing of the priestess who leads the Order. Pilgrims stream to the cathedral, many of them hoping to catch a glimpse of the mysterious saint who lives deep within the cathedral—but few are rewarded.

Beneath the cathedral is God's Sanctum. This special chamber stands ready for the ceremony that the Order will perform on the last day of the world—only a select few are allowed to enter it.

Thirteen years ago, Vanille and Fang awoke from crystal stasis and were found by Lumina, a mysterious girl who resembles a young Serah Farron, Lightning's late sister, taken in by the Order of Salvation, and sheltered in the cathedral. Vanille had gained the power to hear the voices of the dead and when the Order learned of this, they dubbed her a saint and forbid her to leave the cathedral for her safety. As the Order's "sacred one," Vanille is tasked with performing the Soulsong, a ritual that will grant the suffering souls of the dead respite in allowing them to fade at the cost of her life.

Between eight and nine years later, Fang tried to escape the Order with Vanille in tow, but the latter resolved to go through with the ritual and work with the Order to prepare for it, forcing Fang to leave for the Dead Dunes alone. For the next four or five years, Vanille became a curiosity to the public and the cathedral would be frequented by citizens hoping to meet her. Lumina often visited her and the two became friends as Vanille continued to prepare for the Soulsong, spent her days listening to the dead, and giving hope to the people as the Order's saint.

With the end of the world thirteen days away, Lightning awakes from crystal stasis and is made Bhunivelze's savior tasked with saving the souls of humanity. After hearing of her exploits in the city, Vanille requests to see Lightning. She speaks with Vanille's servant, Aremiah, who tells her a precious crystal shard belonging to Vanille has been lost. When Vanille awoke from crystal stasis, she was grasping a piece of crystal and it has been her precious possession ever since as it lets her glimpse the estranged Fang. Lightning finds the crystal from a delivery company employee who claims someone high up in the Order gave it to them with no receiver's address, and Lightning thinks someone from the Order wanted to steal it from Vanille. Lightning returns the crystal to Aremiah and is granted passage into the cathedral at night time.

Lightning finds Vanille with Lumina and Vanille leads Lightning underground to God's Sanctum, showing her a concentration of Chaos around the altar, which Lumina refers to as the "wind of sorrow", lost souls in suffering. Vanille explains the souls of those who died after Valhalla's Chaos burst through Etro's gate were drawn to the cathedral and that she can hear every cry of their pain. The Order seeks the save the dead from their anguish by offering them oblivion and needs Vanille to call them to her. Lightning asks if she will be able to handle millions of souls at once, but Vanille answers she doesn't have a choice. Lumina says the souls have been building up for years, and if Vanille does not call them to her and they ever escaped, it would destroy the world as well as the future.

On the day of the Apocalypse, Chaos advances into Luxerion, engulfing the city with Anubyses emerging from its depths, with the cathedral remaining as the last safe haven as Vanille prepares to sacrifice herself in the Soulsong. Lightning has learned the Order seeks to use Vanille to ensure their own salvation in Bhunivelze's new world by destroying the dead and erasing all memory of them from the minds of the living. They have kept the truth from Vanille and tricked her into believing the Soulsong will release the dead from their suffering once they're destroyed. With help from Noel, Lightning infiltrates the cathedral and enters the Temple of Light beneath it.

Lightning is joined by Fang as they reach God's Sanctum, where the ritual is being performed. They tell Vanille about the Order's true agenda and convince her to instead guide the dead to the Ark where they can be reborn. The Order's high priestess attempts to finish the ritual, but with Snow's timely arrival, she is killed as the holy clavis is destroyed and the Soulsong is thwarted. As the bell begins to toll, Vanille and Fang guide the dead to the Ark together, saving their own souls in the process. When the final bell tolls, Bhunivelze appears, using Hope as a medium, and captures the souls of Lightning's friends and invites her to witness the birth of his new world. After Mog arrives to help, Lightning goes through the Savior's Trials and forges the Ultima Weapon and enters the last trial to confront Bhunivelze in the realm of Cosmogenesis.

Hall of Devotion is the main area open to public. This is where people come to pray salvation from Bhunivelze. It is a long hall with an altar in the end. Vanille stays there during daytime hours to meet believers and give hope to the populace.

Temple of Light is a dungeon underneath the cathedral that opens on the final day. It is a series of passageways with monsters spawning. Going straight ahead from the start and turning north from the first junction, finds a Warrior's Plume. Turning south from the first junction and going ahead ignoring the next junction finds the Holy Revelations at the end of the path. Going through the previously-ignored path and continuing to follow it, first north and then south, again ignoring the next junction, finds a Samurai's Comb at the end of the path. Continuing onward to the east from the previously-ignored junction, Lightning comes across Fang fighting a Chimera. A set battle ensues with Fang in Lightning's party, and she remains in Lightning's party afterward.

God's Sanctum is an underground chamber where Vanille is to gather the souls of the dead and perform the Soulsong. When Fang and Lightning crash the procession, a set battle against two Set commences. After Bhunivelze spirits everyone away, Fang leaves Lightning's party and Mog arrives, opening a shop. The doors from the Sanctum now lead to trials Lightning can take on to prepare for her final battle. After completing a trial, a beam of light appears from the statues joining atop the altar. After all four beams are in place, Lightning bathes her default weapon and shield in the light to transform them into the Ultima Weapon and Ultima Shield, respectively. Obtaining the ultimate equipment earns the Crimson Rebirth achievement.

The trials are four separate altars. They consist of a winding path leading through four rooms. The first three rooms of each altar contain a fixed encounter, while the last one contains an ultimate elemental spell and an exit leading directly back to God's Sanctum. Last Ones cannot appear in the fixed encounter rooms; if enough of a monster's species has appeared to manifest the Last One, the room will instead be empty. Arcangeli Ω, Sugriva Ω, and Chimera Ω cannot appear anywhere in the Cathedral until their respective fixed encounters have been defeated during the trials.

The Altar of Judgment is one of the four trials, accessed from the northeast corner of the Sanctum. It displays a vision of Oerba from Gran Pulse. Lightning can gaze out at the Rust-eaten Bridge which once spanned the neighboring lake. Along the path, Lightning must fight two Arcangeli, five Goblins, and a Zomok. At the end of the path, Lightning will find a Chill Lv. 1 spell.

The Altar of Salvation is one of the four trials, accessed from the northwest corner of the Sanctum. It displays a vision of the Hanging Edge from within Cocoon. Along the path, Lightning must fight two Meonektons, eight Gremlins, and a Chimera. At the end of the path, Lightning will find a Flare Lv. 1 spell.

The Altar of Atonement is one of the four trials, accessed from the southwest corner of the Sanctum. It displays a vision of Eden from within Cocoon. Lightning can gaze down at the city, or up in the sky and see distant landmasses beyond the clouds. Along the path, Lightning must fight three Neelas, three Wendigos, a Sugriva, two Ectopuddings, and an Earth Eater. At the end of the path, Lightning will find a Surge Lv. 1 spell.

The Altar of Birth is one of the four trials, accessed from the southeast corner of the Sanctum. It shows the Sea of Chaos on the shores of Valhalla and Etro's Temple at the summit. Along the path, Lightning must fight two Sets, five Niblets, and a Cyclops. At the end of the path, Lightning will find a a Tornado Lv. 1 spell. 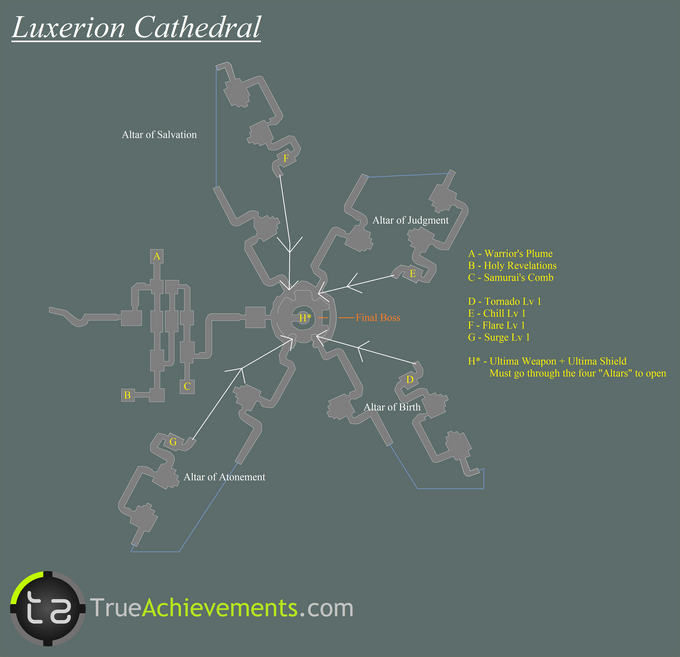 Enemies will appear within the cathedral on the final day.

When fighting battles in the cathedral on the final day, Lightning does not perform victory poses.

On the world's final day only the cathedral is accessible and new shops appear on its premises.

The Forge and Smelt[]

Vanille greets clerics in the Hall of Devotion.

As the high priestess sermons, followers of the Order pray to God on the cathedral steps on the final day.

Lightning and Noel in the Hall of Devotion.

Lightning and Fang in God's Sanctum.