The Lustrous Sword (光の剣? or ひかりのつるぎ, Hikari no Tsurugi?), also known as the Light Sword, Sword of Light, and Light Blade, is a recurring weapon in the Final Fantasy series. It is usually a powerful Holy-elemental sword.

The Lustrous Sword (originally called the Light Sword) is a weapon for Cecil found in the Sealed Cave. It has an Attack Power of 99 Power and 49 Accuracy in the 2D releases. It is Holy-elemental and increases Strength and Spirit by 3. This weapon is metallic.

In the 3D versions, it has an attack power of 80 with an accuracy of 99 with the same properties as the 2D versions. Only Cecil can equip this sword.

The Lustrous Sword is a Holy-elemental, mid-ranked sword found in the Subterrane and dropped by Amazons. It has 99 Power, 50% Accuracy, increases Strength and Spirit by 3. Cecil, Ceodore, Kain, and Golbez can equip it.

The Sword of Light is a

Paladins. It can be dropped by the Warrior of Light in

The Seat of Sacrifice (Extreme), or traded for using tokens acquired from the same duty.

A sword shimmering with a divine glow. Said to dispel darkness and shine the light of truth.

The Light Blade is a sword with 100 Power. It can be made using the Celestial Weapon scroll.

Sword that sealed the Dark Lord.

The Sword of Light has an attack and magic attack of 17 and is also Light-elemental. The sword is obtained by talking to Rolan after defeating Lucifer in Rolan's Soul.

The Lustrous Sword is the weakest holy sword. It provides 65 attack power, +1 Strength, and +1 Wisdom. It is effective against demons, and like all holy swords, is holy-elemental.

The Lustrous Sword is a level 92 weapon exclusive to Cecil. It has 64 Attack and increases his Defense by 2 when he is a Paladin. It can be traded for a Mythgraven Blade, Blood-Darkened Bone x5, Titan Crystal x3, and 30,390 gil.

The Lustrous Sword is a weapon usable only by Cecil, this time a level 90 weapon. It increases Attack by 64, lowers Defense by 1, and increases Cecil's Defense by 1 when he is a Paladin. It can be traded for a Mythgraven Blade, an Electrum, Knight's Dream x5, and 158,000 gil.

The Lustrous Sword is one of Cecil's unlockable weapons, whilst the Paladin class is in effect. It can be obtained, alongside the Dark Sword, either by random chance when redeeming a Treasure token, or by purchasing them from the Shop for 7,200 Gil. Like all other characters' weapons, having it equipped carries no advantages or disadvantages. 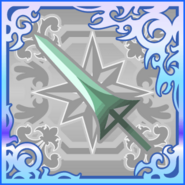 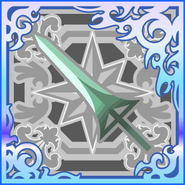