Lustrous Shield (光の盾 or ひかりのたて, Hikari no Tate?), also known as Shield of Light, or Paladin, is a recurring shield in the Final Fantasy series. It is either a low-ranked or mid-ranked shield, depending on the game, and offers decent defense in addition to other bonuses such as elemental protection or status protection.

As of Dissidia Final Fantasy, it is often seen as part of Warrior of Light's weapons, and appears in all appearances with him alongside the Braveheart.

Lustrous Shield is the first shield that can be bought for Paladin Cecil for 700 gil at Mysidia. It provides 2 Defense, 1 Magic Defense, 24 Evasion, 1 Magic Evasion, +3 Spirit, and resistance against Undead-type attacks. In the 3D versions, it is similar in all regards aside from the protections it provides, providing resistance to Dark-elemental attacks as well as against Sleep, Poison, Death, and Curse instead of against Undead attacks.

provides 2 Defense, 1 Magic Defense, 24% Evasion, 1% Magic Evasion, +3 Spirit, and is strong against undead attacks. No other Lustrous Shield can be obtained, and can only be equipped by Cecil, Ceodore, and Kain.

The Shield of Light is a

Paladins. It can be obtained as a drop from the Warrior of Light in

The Seat of Sacrifice (Extreme), or traded for in Eulmore using tokens acquired from the same duty.

Shield of Light is the strongest shield, providing 3 Defense, 3 Magic Defense, 10 Evade, 10 Magic Evade, and immunity to all statuses. It can be obtained by talking to Krinjh after defeating Asmodeus.

Lustrous Shield is a level 71 shield that provides +52 Defense. It can be obtained from the shop by trading 22,510 gil, Force Shield, Godfighter Scales x3, and a Blue Gem.

Lustrous Shield is a level 60 shield that provides +50 Defense and Wall Rush HP Defense +10%. It can be obtained from the shop by trading 92,640 gil, Force Shield, Garchimacera Husk, and Lion's Desire x3.

The Lustrous Shield is the Warrior of Light's default weapon, and is equipped alongside the Braveheart. Like all other characters' weapons, equipping them carries no advantages or disadvantages.

Lustrous Shield from Final Fantasy IV is a Rarity 5 shield.

A shield that gives off a light from ancient times. The shield is imbued with holy powers, and offers various benefits to those using it. The light from the shield offers divine protection by warding evil. The shield symbolizes protection from misfortune and hardship, and many knights have chosen this as their shield of choice when heading out to the frontlines of battle.

Lustrous Shield is a Light Shield obtained by completing the quest The Mysterious Statue. It provides 32 DEF, 10 SPR, and +50% Light resistance.

A sacred shield said to be imbued with the power of light. It is a prestigious shield that the Crystal Orthodoxy bestowed upon an Archbishop who triumphed over an evil heretic.

In Bravely Second: End Layer, Lustrous Shield provides 29 P.DEF, 15 M.DEF, and 29 EVD. It can be found in the Skyhold. 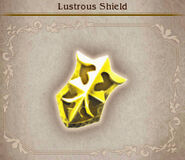 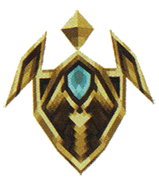 Sprite of Warrior of Light's Shield of Light from his boss sprite in Final Fantasy Record Keeper.

Stranger of Paradise Final Fantasy Origin (with the Braveheart sword).

The shield has been known as Paladin. [view · edit · purge]The paladins, sometimes known as the Twelve Peers, were the foremost warriors of Charlemagne's court, according to the literary cycle known as the Matter of France.