An orphan raised by Nina and Elder Topapa in the village of Ur. Adventurous by nature, his curiosity gets the better of him as he tumbles into a hole created by the great earthquake.

Luneth is the main protagonist in the 3D remake of Final Fantasy III, and the first character to become available. He is one of the Warriors of Light.

) and violet eyes. His Freelancer outfit is a light purple turtleneck covered by a dark violet sweatshirt and a sienna vest. He wears brown gloves, long light gray pants, black knee-high boots, and carries a light brown fanny pack. His theme color is purple, shown in his job armor, while his turtleneck collar is visible while robe-clad. The three buckles on his vest distinguish his job outfits from his allies'. In the opening FMV, Luneth is a Warrior.

Doga and Unei describe Luneth as the light of courage. Sure enough, his tendency to travel recklessly leads him to the Wind Crystal. He frequently jumps into situations despite the dangers. He is cheerful and positive but can be too impulsive or blunt, leading his allies to scold him.

Luneth and Ingus argue in the opening FMV, reflecting their opposite personalities, but while the party traverses a cave, Ingus saves Luneth from falling off a cliff. Luneth assumes the de facto leader role, speaking on behalf of the team and motivating them to continue on their quest. His defending Arc from the bullies in Ur shows he is a leader-like figure among the children.

He is confident but not to the point of arrogance. Luneth is determined to fulfill his goals and keep his promises, getting upset when he believes he's failed someone. He treats everyone in an equal manner, including royalty, and has no qualms about helping strangers. He encourages those more timid than himself. This, combined with his determined and more outgoing nature, help him become a pillar of support for the party.

When he was very young, Luneth and his parents lived in the surface world below the Floating Continent. While traveling on Cid Haze's airship, they were engulfed in a thick, vast darkness and crashed on the Floating Continent. Luneth's parents died, but Luneth survived together with Cid, who took him to Ur and gave him to the elder Topapa. Since then Nina and Topapa raised Luneth and Arc as their own sons in the remote village of Ur.

A grown up Luneth is exploring the Altar Cave when an earthquake drops him into a pitfall where he finds the Wind Crystal. It chooses him as a Warrior of Light and instructs him to find the other three destined. Luneth and Arc venture to Kazus, meeting Refia on Cid's airship, and then Ingus at Castle Sasune, both places cursed by the Djinn. With the help of Sara Altney, they defeat it, lifting the curse. The Crystal declares the four to be Warriors of the Light and charges them to defeat Xande, a sorcerer who has flooded the surface world with darkness.

With Takka's help, the ram is built on the airship. Using the new part, the party destroys the rock blocking the route, destroying the airship itself in the process. The party visits Canaan, Cid's hometown, and enters Dragon's Peak where Bahamut catches them. At its nest, they meet Desch and escape Bahamut and the mountain with him. The party visits Tozus, a tiny town, and head for Vikings' Cove where viking promise the party a ship, the Enterprise, if they can deal with the dragon. In Nepto Temple, they enter the statue of a one-eyed dragon and defeat the Giant Rat who stole its other eye.

Going north to the Tower of Owen using the Enterprise, the party defeats Medusa. Desch regains his memory and sacrifices himself to fix the tower. The party visits the Dwarven Hollows and gains entrance to the Subterranean Lake where they defeat Gutsco, the thief who stole one of the dwarves' Horn of Ice. When the party returns the stolen horn, Gutsco, disguised as a shadow, reveals himself and steals both horns. The party pursues him to the Molten Cave where Gutsco is transformed into Salamander. After Gutsco is defeated for good, the party returns both horns. When the party visits Tokkul, they are imprisoned in Castle Hein. They escape their cell and defeat Hein. The party visits Castle Argus where the king rewards the party for saving them. They visit Cid to convert theit ship into an airship.

Luneth and the others travel to the surface world. They team up with Aria Benett, the last priestess of the Water Crystal, and Luneth befriends her as they retrieve the crystal's shard from the Temple of Water and travel to the Cave of Tides to restore the crystal itself. After she restores the crystal, Aria protects Luneth from an ambush by the Kraken at the cost of her life. After the Kraken's defeat, she dies in Luneth's arms.

The party wakes up in a town called Amur. They enter the sewers to meet Delilah. At first, she gives them fake explosive boots, but then gives them the real boots thanks to the old men they rescued earlier. Outside, the ship is inaccessible. With the new boots, they cross a swampland to enter Goldor Manor and defeat Goldor who destroys the crystal. As he flees, he drops a key needed to unlock the ship.

When the party flies over a castle, the airship is attacked and crashes. They defeat Garuda at the castle, and head to Doga's Manor where they meet Doga. At the Cave of the Circle, Doga turns the airship into a submarine with a spell. The party enters the Temple of Time where they use Noah's Lute to awaken Unei. They head to the Ancient Ruins where they find a new airship, the Invincible, which they fly to the Cave of Shadows. After defeating Hecatoncheir, they obtain the Fang of Earth.

The party heads to Doga's Manor and Doga's Grotto, and defeat Doga and Unei in their monster form to obtain two keys. They visit the Ancients' Maze, and after exiting reach the base of the enormous Crystal Tower. At the top they defeat Xande, summoning the Cloud of Darkness who defeats the party. Doga and Unei's souls resurrect the,, and they head to the World of Darkness, rescue the four Warriors of Darkness, and defeat the Cloud of Darkness. The world is saved and Luneth returns to Ur with Arc.

Luneth's battle prowess is determined by the job he is equipping. He starts a Freelancer, but after making some progress, more jobs become available, and the player can freely change between jobs and accumulate progress in each. Whenever a character gains a level, their maximum HP increases by a random amount, thus, changing to high-vitality jobs—like Monk, Knight, Viking and Black Belt—before leveling up makes it easier to max out HP.

At the end of a victorious battle, Luneth stands with one hand on his hip. When he gains a level or job level, he will jump and punch the air.

Luneth is the only player character with a unique body armor. He is initially equipped with a Vest that cannot be obtained otherwise; however, it is the weakest armor (together with the Rusty Mail), as it provides only minimal Defense and Magic Defense. A reference to his vest is made in Final Fantasy Brave Exvius as one of the ultimate items he awards the player. It retains its minimal defense, but provides a substantial boost to attack, also likely a reference to Luneth's default Warrior class.

Luneth has appeared in the following games throughout the Final Fantasy series:

The Onion Knight in Dissidia Final Fantasy has an alternate outfit that is based on Luneth. His hair becomes straight, long, and silver. His eyes become violet and his costume color changes, but takes on Refia's coloration, possibly in reference to the coloration of the Unnamed Hero Artwork

Luneth is mentioned in the description for the Wind-up Onion Knight in the Japanese version of Final Fantasy XIV.

Luneth appears in the novel Final Fantasy: Memory of Heroes as part of the Final Fantasy III adaptation. His personality is slightly tweaked to remove his impulsive line of thinking, replacing it with a penchant for sacrificing himself. He uses the Warrior and Knight jobs. 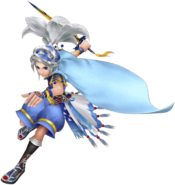 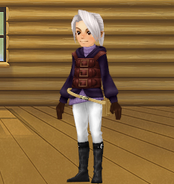 An avatar dressed as Luneth from the Square-Enix Members Virtual World.

In the E3 2006 trailer for the Final Fantasy III DS remake, Luneth is depicted with blond hair. He still has silver hair in the FMV.[1]

Unused text from the game portrays Luneth in a more arrogant light, sometimes trying to portray himself as stronger than he is. One of the Castle Hein sequences[2] has Luneth get separated from the rest when they are captured. Upon rescuing Ingus, Luneth acknowledges that he got the party captured, showing that he can be humble. Luneth shows further personality traits in the unused text, shown to be fond of treasure, such as when Prince Alus tells the party of the treasure in the Dragon Spire[3]. Luneth teases Refia from time to time, causing her frustration[4]. Luneth is shown at several points of the unused script to get sick on airships[5][6], even ones as stable as the Invincible. It is also hinted that he vaguely remembers the airship crash that brought the orphans to the floating continent[7].

Despite having been given to a male character in Final Fantasy III, Luneth is usually a female name derived from the Latin luna. [view · edit · purge]Luna means "moon" in Latin, Italian, Romanian, Russian, and Spanish.

In prerelease screenshots and trailers his name has also been romanized as "Lughnes" and "Lunaith".

When the player fights the Iron Giant, Arc will yell out, "L-Luneth!"; however, if the player renames Luneth, Arc will yell, "L-[insert name here]!" instead of changing it to the appropriate first letter.