A girl of the elven tribe which once lived in an underground castle in Gronoa. Like dwarves, elves are highly intelligent, and hold powers that no other race has. Though because of their love for nature they despise humans who dare to harm it, her feelings were changed by the war that happened long, long ago.

Lunera is a historical character from Final Fantasy Brave Exvius. An elven archer, she lived with her husband Bran at the Lordless Castle when tragedy befell their race. Despite her people's prejudice, she rescued and befriended the dwarf Ruggles. Mentioned in the main scenario in passing, her story is depicted in the event A Promise Beyond Time.

A kind person, Lunera feels that the elves, often aloof and weary of other races, are partially responsible for the war of humans, for not trying to help humankind find the right path. Lunera is much more tolerant than her conservative husband Bran, and seeks ways to repair relations between the races through her actions.

Lunera was born over 700 years ago. She was a powerful soldier who led a squad with her husband Bran and lived in the land currently known as Gronoa. In their underground castle, Bran was in charge of governing one of the elven colonies scattered across the land, which the war of Paladia blew away one by one. Lunera and Bran rounded up survivors from the tragedy, until the miasma that followed cut them off from the outside world. The esper Lakshmi, which had arrived during the great disaster, befriended the elves after turning her back on humans and took up residence in their castle.

However, the elves were unable to adjust to the land and one by one started to pass away due to the miasma. Though they knew of the so-called tree of purification, the elves didn't search for it as Bran didn't wish to expose anyone else to the dangers of the miasma. Eventually everyone but Lunera and Bran passed away, leaving them alone. Worse still, Lunera too began to feel the effects of miasma.

In "A Promise Beyond Time", Lunera goes outside the castle and finds a dwarf called Ruggles unconscious. As he is starving, she shares some of her bread and he swears on his honor to repay her for this. As Ruggles insists, Lunera tells him he can keep her safe on her way back to the castle. As they walk, Lunera asks where his people are, but he replies that had come to the continent looking for ore when the great disaster struck; separated from all the others, he has been alone ever since. She then realizes that Bran might know where to find other dwarves and introduces Ruggles to him.

Bran is rude to Ruggles, however, and tells him to leave, and Lunera questions how he can turn his eyes from Ruggles' pain and loneliness. As they argue, Lunera starts coughing and asks Bran to teach Ruggles what he needs to know to find his home and let him stay until them. Bran reluctantly accepts and lets Ruggles remain. When Ruggles leaves in search for the tree of purification, Lunera asks her husband about the dwarf's whereabouts; though he feigns not to care, he helps Ruggles out, who has found the tree's sprout in spite of great peril.

Ruggles begins cultivating the tree, but before it can produce fruits for Lunera's medicine, Lunera feels her end is close. While writing a farewell letter for Bran and Ruggles, she is glad that Bran is beginning to care for Ruggles as a friend. But ultimately she can no longer fight off the sickness. On her deathbed, Lunera tells Ruggles and Bran of her belief that avoiding interacting with others was perhaps the wrong thing to do. Lunera thanks Ruggles for the joy he brought her, and asks Bran to forgive her for leaving him behind like this and to remember that he is not alone as he has a friend in Ruggles. Asking both to watch the tree grow in her stead, she passes away.

After Bran too passes away, Ruggles dedicates the entire underground castle in memory of the couple, and leaves an inscription that reads: "Bran shall love Lunera forever...".

Lunera appears as an optional playable character, being a permanent 5-7★ summonable unit. She is partly based on recurring Ranger job, being able to use bows and ranged attacks to deal magical damage, but she is in fact a 'bard' unit. As such, she is able to sing and restore the party's HP and MP over a set amount of turns. Besides bows, her equipment selection consists of daggers, staves, rods, instruments, whips, maces, along with hats, clothes, robes and accessories. 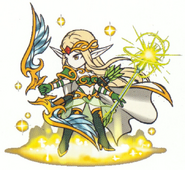