His name is Fusoya. He's from the moon.

The Lunarians, also known as Moon Folk and Moonfarer, are a recurring race from the moon in the Final Fantasy series. Physically, the Lunarians are nearly identical to humans and their technological advancements and knowledge are further than them.

The people of Lunarian heritage seen in Final Fantasy IV possess no distinctive physical traits that would identify them, other than their light-colored hair.

Lunarians are natural mages, and most seen know the ultimate magic, Meteor, along with a variety of other high-level spells. Meteor proves a crippling weakness for the Lunarians, as the half-Lunarian Golbez is weakened by Tellah's Meteor, Zemus is finished off by Meteor by both Golbez and Fusoya, and Zeromus later returns the favor by weakening Golbez and Fusoya with Meteor.

Long ago the Lunarians lived on a planet between the "Red Planet" (Mars) and the "Great Behemoth" (Jupiter). The Lunarians' home planet was about to be destroyed, so they fled to the "Blue Planet" (Earth). They discovered humans still in the process of evolution, and found the two races could not co-exist. The Lunarians decided to await the day the humans could understand and live peacefully with them, so a second moon was created in orbit over the planet.

Eight of the sixteen Crystals the Lunarians possessed were taken to Earth, presumably to either speed up the evolution of the humans, or to harmonize the Red Moon with the planet to stabilize its orbit. The Lunarians went to sleep near the moon's core, while one of them, Fusoya, stood guard over them. The only entrance to the path to the core was concealed under the Crystal Palace.

Although the majority of Lunarians were content to sleep and co-exist with humans, Zemus believed they should use the Giant of Babil to destroy humanity and leave Earth to the Lunarians. It is for this reason, as well as the protection of the Lunarians as a whole, that Fusoya sealed Zemus and forced him to sleep.

Fusoya's brother, Kluya, built an airship known as the Lunar Whale to travel to Earth where he taught advanced technology, such as airship building and the Devil's Road, and the secret of magic. Kluya fathered two sons with a woman named Cecilia. Kluya was killed by a group of "angry humans" and his spirit came to rest atop Mount Ordeals. The orphaned Theodor abandoned his baby brother Cecil at Baron, where he would be taken in by the king. Theodor was contacted telepathically by Zemus, who still possessed psychic powers in his sleep, and Zemus took control of Theodor's mind, christening him Golbez, "an insect birthed from womb of dragon's corpse".

Under Zemus's control, Golbez gathers the eight Crystals of Earth and activates the planetary elevator within the Tower of Babil, transporting the Giant of Babil to Earth. Through the combined efforts of Cecil Harvey and his allies, the Giant is destroyed and Golbez is freed from Zemus's control. Golbez returns to the moon with Fusoya, intent on killing Zemus.

Confronting him in the moon's core, the two kill Zemus, but his hatred survives and develops a consciousness of its own, becoming the beast Zeromus. After Zeromus is defeated, the Lunarians decide the Earth would be better off without their presence, and move their moon out of Earth's orbit, heading for parts unknown.

The moon is targeted by The Creator for its Crystals. Fusoya and Golbez must fight Maenad, who revives Zeromus to attack them. Golbez escapes to Earth, but Fusoya remains behind as Zeromus uses his Big Bang attack. Golbez is teleported aboard the Lunar Whale and sent to Earth. The fate of Fusoya and the Lunarians after this is unknown, though Golbez plans to return to the moon and find out.

Krinjh is the last survivor of the Moon Folk, a mystical race that founded the kingdom of Guera.

Magnolia Arch is from the Moon. Rebuilding her hometown, Fort-Lune, is a minigame similar to the Norende restoration minigame from Bravely Default. Moonfarer is a name the Sagitta tribe calls the folks who lives on the moon. The people on the moon have a tradition related to flowers; when a man gives a flower to a woman, this action is considered a marriage proposal.

Krinjh in Final Fantasy: The 4 Heroes of Light. 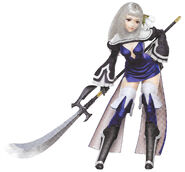 Magnolia Arch from Bravely Second: End Layer.
Add a photo to this gallery

Lunarian is a demonym for the people who live on the moon. [view · edit · purge]Luna means "moon" in Latin, Italian, Romanian, Russian, and Spanish.

Races
Retrieved from "https://finalfantasy.fandom.com/wiki/Lunarian?oldid=3231520"
Community content is available under CC-BY-SA unless otherwise noted.