Behold, my children! She has heard our prayers! She is risen! The promised Ship of Light—the Lunar Whale!

The Lunar Whale, also known as the Big Whale and Magical Ship, is the ultimate airship in Final Fantasy IV, bestowed on the party with the aid of the Elder of Mysidia.

The Lunar Whale's sprite is three to four times the size of the other airships, and it moves slower. Due to its size the ship cannot land in some places the Falcon and the Enterprise can, and it cannot enter the crater to the underground; if the player attempts to land the airship in the crater, the airship will lower and then rise back into the air, as it is too big to fit.

Some versions of Final Fantasy IV have a glitch concerning the airship, where the player may accidentally lose the airship on the Red Moon.

The ship was constructed by the Lunarian Kluya to travel between the Red Moon and Earth.[note 1] After using the Lunar Whale to travel to Earth, Kluya put it to rest in the sea near Mysidia, at a point where the continent's shape forms jaws at the end of a dragon-like tract of land. Thus the Mysidian Legend refers to the airship as "Birthed from womb of Dragon's maw, and borne unto the stars". King Giott is also aware of the legend, but refers to it as explicitly a legend about the Lunar Whale.

Golbez acquires the Earth's Crystals and activates the Tower of Babil to call the Giant of Babil from the moon. The elder and the mages of Mysidia pray and create a great whirlpool from which the Lunar Whale rises to ferry Cecil and his allies to the Red Moon. The airship serves as transport for the party, and after Zeromus has been felled, is returned to slumber within the waters near Mysidia.

Porom and the elder of Mysidia witness the Lunar Whale mysteriously rise from the ocean, and he sends her to Mount Ordeals to find Kain, fearful of what this means. In The Lunarian's Tale, it is revealed that Fusoya and Golbez called the Lunar Whale from the Red Moon, now adrift in space since leaving Earth's orbit. After the Mysterious Girl shatters their Crystals and declares her intent to travel to Earth, Fusoya and Golbez call the Lunar Whale, and Fusoya teleports Golbez aboard and sends him to Earth on it, staying behind to face Zeromus's Malice and his Big Bang attack.

During The Gathering Tale, the party reassembles and Golbez takes them to the Lunar Whale to travel to the True Moon and pursue the Mysterious Girl. If Golbez survives, he takes the Lunar Whale into space again to seek out the Red Moon and discover the fate of Fusoya and the Lunarians.

The ship's main chamber has an elevated deck hosting the Crystal of Flight that controls flight between the Earth and the Red Moon, with a control panel on the wall above the Crystal that allows the player to fly the ship manually. Three staircases lead to a lower portion of the ship with a room full of healing pods and a chamber with a Fat Chocobo—in the 3D release the Fat Chocobo uniquely is mechanical. Unlike the other airships in the game, the Lunar Whale lacks weaponry.

In The After Years, the second room with beds contains just one bed, and the Fat Chocobo's chamber is replaced with a staircase to the lower decks. The lower deck is similar in layout to to the top deck, with a save point in the second room and in the large chamber hosting four healing pods. Unlike Final Fantasy IV, the player is not free to return to Earth after traveling to the True Moon. As in other Final Fantasy games, the party members not currently in the party can be found wandering the decks and can be spoken to to alter the current party.

The theme when piloting or exploring the inside of the Lunar Whale is called "Lunar Whale", track 39 on the original SNES version soundtrack. For the English Final Fantasy Chronicles version soundtrack, the title is "The Big Whale". An arranged version appears in the Nintendo DS remake, now called "Magic Ship", as track 15 on the second disc of that version's soundtrack album.

Lunar Whale is the first 8-player mount in the game. This is an in-game item available for purchase in the online store to commemorate the Final Fantasy XIV Digital Fan Festival 2021.

The Lunar Whale appears in the far distance at the stage Lunar Subterrane as a background element next to the Crystal Palace. Its field icon is also used in the Duel Colosseum mode to represent higher level enemies.

The Lunar Whale appears as an Easter egg in the stage Lunar Subterrane. The airship appears on the lunar surface next to the Crystal Palace.

The Lunar Whale appears as a skin of the "Player Airship" during the update of May 16th, 2018. 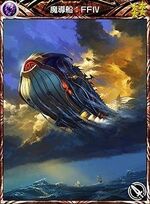 Inside the Lunar Whale (PSP).

Inside the Lunar Whale (DS).

The Lunar Whale in Lunar Subterrane concept art for Dissidia.

The Lunar Whale in the opening FMV of Final Fantasy IV.

The Lunar Whale from the opening FMV for The After Years in Final Fantasy IV Complete Collection.

Lunar Whale in The Complete Collection. 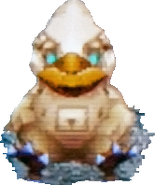 The Lunar Whale on the Final Fantasy IV DS website.

Yoshitaka Amano artwork of the heroes of Final Fantasy IV with Lunar Whale on the sky.

The Lunar Whale in a cutscene (PSP).

The Lunar Whale in The After Years (iOS).

Thus the name stands for "moon whale", referring to its appearance and origin.