The Lunar Tunnel, also known as the Lunar Path, refers to two locations in Final Fantasy IV and Final Fantasy IV: The After Years. They are a pair of caves that lead to the Crystal Palace.

The background theme that plays in the caves of the Lunar Tunnel is called "The Lunarians". 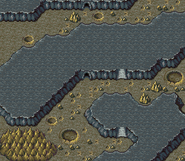 The Lunar Path entrances on the world map (SNES).

The tunnel (iOS).
Add a photo to this gallery