Basically, this lunar base was built to keep Adel under surveillance. We sealed her and kept her here where the earth and the moon's gravitational forces are in equilibrium.

The Lunar Base is a location in Final Fantasy VIII. It is an Estharian space station created to observe the moon. Full-time crews take turns spending half a year at the base, and even the president of Esthar sometimes comes over. The Lunar Base is entered in special capsules, whereupon a person is placed in a state of forced sleep, and launched off into the air from the Lunar Gate, a launch pad in Esthar. Giant green nets at the base receive the capsules, which are then taken to the boarding room.

Not long before Sorceress Adel's capture, the Lunar Base was constructed to observe the moon. It would eventually serve the purpose of keeping Adel sealed in a location where she could never escape. Merely killing Adel would not have been enough, as she would have only passed on her powers to someone else.

With Dr. Odine's technology capable of sealing a sorceress's powers, Adel was secured inside a suspension seal and launched off to space by three Ragnarok spaceships. Due to the powerful sealing technology, what became known as "Adel's Tomb" began to interfere with the radio waves back on earth.

Squall Leonhart and his friends arrive at the base to find Ellone, a girl with mysterious powers who has said to have come aboard the base. Squall hopes that Ellone could help cure Rinoa Heartilly, who has fallen comatose for unknown reasons.

They meet up with the base's leader, Piet, who explains Adel's suspension seal. They can also bump into Esthar's bumbling president who is on site to inspect Adel's Tomb. The president always wears his space suit, and his crew ignores his decisions based on "hunches". Squall finds Ellone, who doesn't explain what she is doing at the base apart from having gone there to "meet someone." She is happy Squall has regained their shared childhood memories of their time spent at Edea's Orphanage and tries to use her gift to go back into Rinoa's past to find out what happened to her. In the middle of the talk Rinoa wakes up, although she does not act like herself. She puts on a space suit and goes out into space to break Adel's seal.

Back on earth, the G-Forces, led by Squall's rival Seifer, start the Lunar Cry by placing the salvaged Lunatic Pandora on the Tears' Point. The Lunar Cry brings monsters from the moon down to earth, Adel's tomb becoming entangled in the stream of monsters and being swept along with them. Rinoa is left for dead after Ultimecia, a sorceress from the future who had possessed her, leaves Rinoa's body in space in favor of Adel's.

As the Lunar Base is drawn near the moon, Squall, Ellone, Piet and the rest of the crew escape the station's destruction via an escape pod. The Lunar Base is destroyed by the stream of monsters, and while aboard the escape pod, Squall begs Ellone to send him into Rinoa's past. The truth about Ultimecia's possession of Rinoa is revealed, but Squall is unable to do anything to prevent it.

Squall begs Ellone to help him, and she telepathically connects him to Rinoa's mind as she floats in space, and Squall communicates to her to activate the emergency oxygen supply of her space suit. After coming to, Squall abandons the pod and enters out into space to rescue Rinoa. He catches up with her, and they stumble upon a derelict Ragnarok floating nearby, which takes them back to the planet.

The escape pod falls to the plains of Esthar, from where G-Forces capture Ellone and take her to the Lunatic Pandora where Adel is recuperating, ready to become Ultimecia's next host. Piet stays at the crash site, distraught over the destruction.

None
The control room is the station's central hub. It controls all actions and mechanics and has supervision over the station. The room has a large window viewing space, with holographic symbols and markings across it, and control terminals just in front of it where the staff supervise the space station.

Adel's seal has two locks: one in the control room, and one on the tomb itself.

None
The docking bay is a narrow, dark blue, oval-shaped room used to dock pods launched from Esthar and to leave the Lunar Base back to the planet or out to Adel. One must wear a spacesuit, as the bay opens to space.

None
The prep room is a small antechamber used to suit up into a spacesuit to leave the base. It contains two metal doors at the back to change into a spacesuit, a door on the right leading out into the corridors between rooms, and a door on the left behind a yellow window leading to the docking room,

None
Ellone's suit is a small, comfortable room in the recesses of the station. It has a sofa and a table next to a window overlooking space, and a small bed contained in a red tube. It is the only living quarters accessible to the player, although there are most likely others.

Laguna's Triple Triad card can be won from Ellone in Triple Triad. Lunar Base uses almost all the card rules found across regions, meaning that the card becomes easier to win if the player by chance abolishes the Random rule.

A hidden Meteor draw point that never refills can be found here.

None
A smaller docking area; the boarding room is a metal room where boardees from the single-man pods fired from the Lunar Gate emerge after their pods have docked.

None
The med lab is an on-board medical facility where Rinoa is kept until she awakens. It is a chrome, brightly lit room with a bed on the left, and a holographic terminal used for the doctors near the back on the left-hand side. A door at the back leads to a smaller, circular room with a transparent glass floor, where Rinoa is contained within a pod.

None
The escape pods are small green chambers used in times of emergency. They can fit up to four people and are jettisoned from the Lunar Base back toward the planet. They pass through the atmosphere mostly undamaged. The screen before the escape pods has a hidden Meltdown draw point and a save point.

A high-tech device intended for weakening and confining a sorceress' power. Shot into the moon's orbit after going through a special sealing process. Used to confine Sorceress Adel. It is the main cause of radio interference on the planet.

The structure that houses Adel's "dead" form floats in space near the moon, frozen. Adel has stayed in the tomb petrified since the end of the Sorceress War. Its presence on the orbit causes a radio interference back on the planet, which led to the technology being largely abandoned.

The tomb is shaped similarly to Esthar City's presidential palace, perhaps a final nod of unwilling respect to Esthar's once-tyrannical ruler. The shape also resembles wings, something associated with other sorceresses: Rinoa and Ultimecia.

The escape pod falls to the peninsula south of Tears' Point and becomes a hidden location. The location is not marked on the world map, but the player can access it by stepping on the correct spot on while on foot (Video of correct spot). If the player visits the site they will find Piet, but if they visit during endgame, the player can find the Queen of Cards on the site.

People associated with Lunar Base[]

Lunar Base is a notoriously difficult Triple Triad area, as it uses all the rules. Rules can still be randomly abolished even if the player can't mix rulesets as Lunar already has all rules in play.

Ellone holds the Laguna card. If the player misses playing her, they will lose the chance to get the card unless they challenge the Card Club during endgame.

Piet holds the Alexander card. If the player misses it, they can find the crashed escape pod on the world map and challenge him there.

There is an FMV that shows a Lunar Base's camera drone destroyed by a monster during the beginning stages of the Lunar Cry. To view it, the player must follow Ellone into the lift room that leads to the escape pods, and then return to the Lunar Base control room, go to the control panel and press

"Dance with the Balamb Fish"

When first boarding the satellite the track "Dance with the Balamb Fish" plays and continues on as Squall explores the station. When Rinoa awakens, the event is accompanied by the "A Sacrifice" theme until the Lunar Cry occurs and the soundtrack is replaced by the theme "Movin".

The full motion video showing the arrival at the Lunar Base is a homage to the 1968 film 2001: A Space Odyssey, reminiscent of the "Blue Danube" scene. In place of "The Blue Danube", "Dance with the Balamb Fish" plays. The space station utilizes centrifugal force to simulate gravity as in 2001. The scene where Rinoa slowly and silently floats across the screen silhouetted against the blackness of the space may also have been inspired by the movie. Within the space station, unique camera angles are used, similar to the ones used on the Discovery One by Stanley Kubrick, to show the centrifugal rotation.

The position of the Lunar Base directly between the earth and moon, as well as the reference to being "where the earth and the moon's gravitational forces are in equilibrium," imply that the base is located at the Earth-Moon L1 Lagrange point.

Concept art of the stairs. 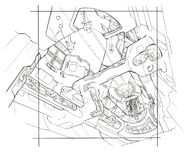 Concept art of the hallway outside the med bay.

Concept art of a room in the base.

The president tries to remain during Lunar Cry. 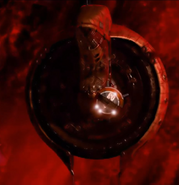 The base destroyed by the Lunar Cry.