A hunter who once lived in the forest. Luna's beauty and infallible accuracy with the bow led many to believe she was actually a wood spirit. In truth, she had been abandoned in the forest as a child and raised by a hermit, who taught her how to hunt. Not accustomed to human speech, her inability to communicate only added to her exotic mystique.

Luna is a character and summonable unit from Final Fantasy Brave Exvius. An ranger that once dwelled within the forests of Grandshelt, her vision can be summoned by Rain and Lasswell to aid them in their battles.

Originally an inhabitant from the Kingdom of Grandshelt,[1] Luna was abandoned in one of its forests as a child and raised by a hermit, who taught her how to hunt. Unaccustomed to human speech, she was both fearful and curious of the human world that lay beyond the forest.

One day, Luna came across a traveler wandering through the woods, with whom she split her rations with. Upon doing so, the traveler took out some white garments (her "Cupid Luna" attire), and told her something. Though Luna was unable to understand his words, she was taken by the clothes and accepted them. She would often wear them; while doing so, she was often seen by villagers whenever she ventured closer to the edge of the forest, but due to how fast she moved, they thought she was a ghost, leading them to avoid going near the forest for a while.

Having spent her whole life in the woods, she eventually passed away, leaving behind a crystal with her memories, to be summoned by those with the power of visions.

Luna's job is listed as Ranger. A 3-4★ rare summon, Luna's excels in physical damage. She has no natural element or status resistances, and can equip only bows and guns. As armor, she can wear hats, clothes, and accessories only. Her Trust Master reward is the Barrage skill – an active ability that enables the equipped unit to deal 4 hits of our physical damage (3.2x) to random enemies, at the cost of 16 MP.

Luna has a variant: the Global-exclusive "Cupid Luna" (3-5★) unit, available only during the Trials of Love event. Her role and equipment remain the same, but features a wider range of abilities and another Trust Master reward: the Soluna Ring accessory. Units equipped with the ring have a stat boost (MP+30), elemental resistance to light and dark (+15%), and the passive Auto-Refresh ability. 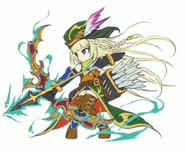