Lumoria is a celestial region in Final Fantasy XI. Once situated on Qufim Island,[1] it has now separated from Vana'diel and floats in space above it.[2] This is the event that gave Qufim Island its crescent shape.[3]

Lumoria contains the ruins of the Celestial Capital Al'Taieu, a legendary Zilart city lost over ten thousand years before the beginning of the game's story. It is the ultimate destination of the Chains of Promathia expansion, accessible once "Chapter 8: Emptiness Bleeds" is started. 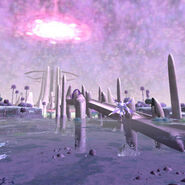 The Garden of Ru'Hmet

In the alternate realm of Abyssea, the Celestial Capital did indeed separate from Qufim Island as in Vana'diel, but rather than floating directly above the planet, when Shinryu was manifested from Promathia Al'Taieu situated itself on the surface of Abyssea's moon and the Empyreal Paradox separated from the rest of the region. Now disconnected from both Abyssea and the rest of Lumoria, Abyssea - Empyreal Paradox has both a view of the planet Abyssea in the distance and Lumoria situated on Abyssea's moon below.[4]

The Empyreal Paradox appears as the representative arena for Final Fantasy XI. The arena is a large flat expanse with a giant orange crystal in the center. Several smaller crystals line the arena on the outside perimeter, and the world of Final Fantasy XI can be seen below the stage. In the stage's Omega version, orbs of light float from this world up to the crystal in the center of the stage. Characters too close to this center crystal steadily lose Bravery the closer they are to it.

In an earlier cycle, Prishe brought the Warrior of Light there, and chastised him for thinking that so long as he can fight, his life has meaning, and tells him that he must rely on his emotions. It is here that she gave him a name that he forgets in later cycles.

The final battle of the twelfth cycle takes place here; the six new characters, namely Lightning, Kain, Tifa, Laguna, Yuna and Vaan, come here seeking the portal the manikins are using to cross over from the Interdimensional Rift. After defeating a force of the Warriors of Chaos, the six battle a horde of manikins and succeed in closing the portal and cutting off Chaos's supply of the creatures, but at the cost of their own lives.

During the thirteenth cycle, Bartz and the Warrior fight several manikins here. The Warrior then tells Bartz that he has faint traces of his memories, including someone calling him by name, and that he does not want to be given another name by Bartz.

The Promyvion Shard is the battlegen item obtained through stage destruction in this area.

The Empyreal Paradox appears as the Battle Music Sequence for "Shinryu".

Lumoria likely derives from "Lemuria." [view · edit · purge]Lemuria is the name of a hypothetical "lost land" variously located in the Indian and Pacific Oceans. The concept's 19th-century origins lie in attempts to account for discontinuities in biogeography; however, the concept of Lemuria has been rendered obsolete by modern theories of plate tectonics. Though Lemuria is no longer considered a valid scientific hypothesis, it has been adopted by writers involved in the occult, as well as some Tamil writers of India. Accounts of Lemuria differ, but all share a common belief that a continent existed in ancient times and sank beneath the ocean as a result of a geological, often cataclysmic, change, such as pole shift.