A mysterious girl who appears in front of Lightning at every turn.
Her unpredictable nature wreaks havoc everywhere she goes.
A helpful friend or mischievous foe? This capricious little demon plays with Lightning and the rest of the world as if they were toys in a toy box.

Lumina is a major supporting character in Lightning Returns: Final Fantasy XIII. She resembles Serah Farron in appearance and crosses paths with Lightning during her quest to save the world, at times appearing as a friend and other times as an adversary.

This mysterious young girl appears to be able to control the power of Chaos, and likes to get in Lightning's way at every turn.

It seems that she has met Snow before, and the two have more than just a passing acquaintance, but Lightning has spent the last five centuries in crystal, and she has no way of knowing what could have happened between the two.

Still, she cannot deny that the girl bears a striking similarity to Serah. But Serah is dead, and this Lumina seems to have her own goals.

While Lumina's eyes appear a bluish-gray in-game, her eyes are a sea-blue in her CG render. She has a wide nose and wide, pink lips. Lumina resembles a younger version of Lightning with elements of Serah in her design. Her hair is the same pale pink tint as Lightning's but styled with a ponytail on the left side like Serah wears hers. Lumina wears a black dress adorned with feathers, a sweeper with pink interior, a black hairband, a sleeveless halter top with a black collar with silver studs and a silver feather pendant, a lacy skirt, a long glove on her left arm, thigh-high stockings, and pump shoes. She has aerials on the back of her right shoe and her left collarbone. Physically, Lumina appears as a twelve-year-old, and according to Lightning, resembles Serah at that age.

So you'll play his game for as long as it takes to build the new world. Then you'll sit in judgment on him. You'll betray him, and destroy him, and steal the new world he labored to build. Is that your plan? I love it! Turning on God and making him a pawn in your own game. It's audacious.

Lumina to Lightning about Bhunivelze

Lumina is playful and unpredictable, seeing the world as a plaything, and people as a source of entertainment. Although she can give helpful advice, she enjoys toying with Lightning and summoning monsters for her to fight. She is connected to the Chaos, speaking of the monsters it spawns as her "friends", and walking through and manipulating it unharmed. Hinting at a deeper connection to their relationship, Lumina refers to Lightning as "sis". Lumina keeps in touch with Lightning's comrades from years past and also mingles with various inhabitants of Nova Chrysalia, telling them about Lightning and at times offering "help" which sometimes turns to their disadvantage. Ultimately, because of her origins, Lumina is scared of being alone.

Lumina uses teleportation magic and can summon various monsters to her aid. While she teleports, Lumina flashes in bright light despite being connected with Chaos, which manifests as dark clouds. She can create false prophecies into Oracle Drives, and pull Lightning into a secret place inside her where the two can converse without anyone else hearing them. Lumina can also use magic to shatter Lightning's sword and bring down a chandelier upon her and Snow.

You can see when you're inside this stuff? Then you can't be one of God's regular lackeys, can you?

When their parents died, Lightning abandoned her past and became strong for Serah under the delusion of not needing help. The denied feelings of wanting companionship and support from others, along with her selfishness, fear and loneliness, caused an inner turmoil that affected Lightning throughout her life. When Lightning entered crystal stasis Serah's heart and soul were kept inside her, safeguarded for centuries. The English localization makes no distinction between people's hearts and souls, but the two are separate, albeit linked, entities in the Japanese version. When Lightning awoke from crystal stasis Bhunivelze purged Serah's heart and soul from Lightning, damaging Lightning's own heart in the process, making her appear emotionless. Lightning's suppressed feelings and vulnerabilities, which had now been removed from her, used the Chaos to manifest a physical form: Lumina. As a part of Lightning, Lumina became a vessel for Serah's heart to safeguard her from the Chaos.

Lumina lived in Nova Chrysalia, getting acquainted with people and earning a reputation as a trickster. When Vanille and Fang first awoke from crystal stasis, Lumina found them and witnessed the Order of Salvation taking them into their care. After Fang departed for the Dead Dunes, Lumina would frequent the lonely Vanille who was not allowed to leave the cathedral. Lumina showed Noel an Oracle Drive with a fabricated prophecy of Lightning almost destroying the world and him stopping her, leading him to become obsessed with the idea of fulfilling it.

Lightning first encounters Lumina in Yusnaan during the former's confrontation with Snow Villiers in his palace. After Snow grabs Lightning, Lumina appears in his place as an illusion and breaks Lightning's sword with magic. In reality, Lumina is on the chandelier above the ballroom, which she sets ablaze before vanishing. The chandelier falls but Snow uses his l'Cie powers to halt it. As Lightning chases Snow through the palace, Lumina reappears to her in a Chaos infusion and claims Lightning is different from Bhunivelze's usual servants since she can see inside the Chaos. Lumina summons a Zaltys to block Lightning's path and disappears, but Lightning defeats it. After Lightning retreats to the Ark Lumina returns to the area, amused by Lightning's hopes of saving Snow and the rest of Nova Chrysalia's people.

Between Lightning's missions and being brought to the Ark at the end of each day, Lumina regularly pulls her into a dark parody of the Ark inside Lightning's subconscious to talk with her. Lumina explains it to be an ideal place for private conversations she does not want Hope, and by extension Bhunivelze, to overhear. During one such conversation, Lightning learns Lumina is tied to Serah. Lumina uses these moments to plant seeds of suspicion into Lightning regarding Bhunivelze's true agenda.

In Luxerion, Lumina watches Lightning's quest to rout the Children of Etro, and divulges the reason Noel wants to kill her. Once Noel is freed from his burden and his soul is saved, Lumina reveals the Oracle Drive was altered and is surprised Noel had rejected the prophecy. Lightning meets Lumina when visiting Vanille, who shows Lightning the concentration of lost souls within God's Sanctum beneath the cathedral. Lumina terms them the "wind of sorrow", commenting the Order seeks the save the dead from their anguish by offering them oblivion and needs Vanille to call them to her. Lumina says the "wind" has been building for years and would spell the end of both Nova Chrysalia and any future world were it to escape.

When Lightning returns to Yusnaan and sets out to infiltrate Snow's palace, Lumina tells her about his guilt and isolation, and sets a Cyclops on Lightning. When the two meet again after Lightning defeats Snow in his Cie'th state, Lumina speculates about his motives and advises Lightning to kill him and fulfill his wish. Lightning instead brings Snow around and revives his hope for the future.

In the Dead Dunes, after the Order's Secutors steal the holy clavis from Lightning and Fang, Lumina taunts Fang for believing Lightning to be an agent of the Order. She reveals she was monitoring them until they found the clavis so she could lead the Secutors to them. Lumina says the Secutors are taking the clavis to Luxerion where, on the world's final day Vanille will sacrifice herself in the Soulsong, a ritual to obliterate the souls of the dead, including Serah's.

When Lightning meets Sazh on the Wildlands, she learns Lumina has given him a coffer of souls, saying that if Sazh collects Dajh's soul fragments and places them into the box the boy will be roused from his coma. Lightning finds the soul fragments and Dajh awakes. After Lightning's battle with Caius Ballad at the Temple of the Goddess, Lumina reveals how the multiple incarnations of Yeul unwittingly caused the leaking of Chaos into the mortal realm that triggered the events of Final Fantasy XIII-2.

On Nova Chrysalia's final day, Lumina appears in Luxerion to explain the truth behind the Soulsong. The Order plans to use Vanille as a sacrificial offering to wipe out the souls of the dead so the living can be reborn with no memories of their existence to start in the new world with a clean slate, which is what Bhunivelze wanted all along. The Order has kept the truth from Vanille and tricked her into believing the Soulsong will merely save the dead from their suffering.

When Lightning decides to storm the cathedral to stop the ritual, Lumina pleads her to stop saving everyone, begging Lightning not to leave her alone. After Vanille and Fang guide the souls of the dead to the Ark to be reborn, Yeul tells Lightning of Lumina's origins as Lumina releases Serah's heart from her body. When Lightning attempts to sacrifice herself to destroy Bhunivelze, Lumina appears in her subconscious and convinces Lightning to accept her vulnerabilities. Once Lightning cries for Lumina not to leave her alone and pleads for help, Lumina is reintegrated into Lightning and her heart is restored to normal.

In the new world, a reporter named Aoede interviews Fang and Vanille on her quest to uncover the truth behind people's latent memories of another world. During the interview, the pair says they don't know how or why they awoke from crystal stasis, but speculate it to have been the work of either Bhunivelze or Lumina. Vanille says Lumina might have been the one who woke them up so she would have someone to indulge her, because even though she came across as a spiteful prankster, in reality, Lumina was a lonely girl who wanted attention.

We asked ourselves how we could introduce the hidden face of Lightning in the story. This is how the character of Lumina was born. She looks like a young Serah but, more importantly, her inner feelings reflect the hidden emotions of Lightning.

Lumina was designed by Toshiyuki Itahana,[2] with her look having a "gothic lolita style". The character was designed to appear like a twelve-year-old girl, and her exaggerated movements were designed to be especially realistic when compared to the other characters'.[3]

In the Japanese release, Lumina is voiced by Kanae Itō.

She is voiced by Jessica DiCicco in the English release. She shares her English voice actress with Olette from Kingdom Hearts II.

"Lumina's Theme" is the eighth track on disc 3 of Lightning Returns: Final Fantasy XIII: Original Soundtrack, composed by Naoshi Mizuta and Masashi Hamauzu. It's a dark tune that displays Lumina's mysterious and playful nature, and contains a reprise of "Blinded By Light", alluding to her connection with Lightning.

Lumina is an ally and a summonable Legend. Her EX ability is Full Swing (Cyclops).

Lumina appears with an Ice-elemental card. 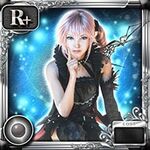 Lumina makes an appearance as a card.

[view · edit · purge]Lumina is the plural form of the Latin word lumen, meaning "light" (in the sense of radiance, brightness). An alternate definition of lumen is "eye". In anatomy, a lumen, plural lumina, means opening or space. "Lumen" is used to describe the interior space of an anatomical structure, such as a blood vessel.