Yuna's guardian, and an accomplished black mage. She's guarded two summoners before Yuna, and learned much from those pilgrimages. No one, not even Wakka, knows how she controls the puppets she uses as weapons.

Lulu is a playable party member in Final Fantasy X. She is a Black Mage who casts Black Magic in battle and wields animated plush toys for weapons, akin to voodoo dolls. She is slow, but is able to hit enemies' elemental weaknesses for high damage and evade most physical attacks aimed toward her.

Because touching a save sphere restores all HP and MP, there is no need to conserve Lulu's MP if simply passing through areas without intentional level grinding. Her magic makes her a powerhouse in the early game, but her usefulness drops off later when everyone begins to move onto each other's Sphere Grid paths; Yuna is a superior Black Mage if given Black Magic spells, but there are segments of the game where she is not available.

Lulu and the rest of the Final Fantasy X cast are the first Final Fantasy characters to have different casting poses based on the spell's tier. If Lulu is using tier 1 magic, e.g Fire, she puts her hand on her shoulder, then casts it. For rank 2 magic, e.g Fira, she raises her right arm up past her head, and lastly, for tier 3 magic or greater, like Firaga or Flare, she raises both arms to the sky, then brings them down in a full circle, casting the spell. The doll she is using falls to the ground and mimics her pose.

Lulu's Overdrive is Fury that casts a barrage of up to sixteen spells on the target. To execute Fury the right thumbstick must be rotated 360 degrees. More spins add more castings. Nearly all of the Black Magic spells can be cast with Fury. These spells cannot be evaded, protected against, or prevented in any way and do not cost MP, but do significantly less damage than a normal casting of the same spell. Lulu cannot cast a spell with Fury until she learns it in the Sphere Grid, and she can only Fury-cast Black Magic.

Lulu is a Black Mage, and thus her physical attacks and defense are initially weaker than the other characters', although there are a good number of Defense nodes on her section of the Sphere Grid. Her HP, Strength, Accuracy, and Agility remain fairly low. Lulu's Magic, Magic Defense, MP, Defense, and Evasion are strong. Lulu has one of the highest Defense stats in the game, which is uncharacteristic of her job class.

Lulu equips dolls as her weapons and bangles as her armor. When performing Attack or other physically-based ability, Lulu lets a doll go and hit an enemy, making her physical attacks the longest to perform of all the party members.

Lulu's dolls are based on classic Final Fantasy creatures. She usually uses a Moogle doll but can also use the Cait Sith, Moomba, Cactuar, and PuPu dolls. As revealed in Final Fantasy X-2, Lulu's dolls are sentient with the mentality of children who view her as their mother, but Lulu is unaware of this fact (despite using her magic to animate them in her attacks).

Lulu's Sphere Grid area runs near Rikku's and Wakka's, and her Sphere Color is purple. The unique abilities in Lulu's default position on the grid include the following:

Affection mechanics is a hidden gameplay element that governs certain cutscenes. Tidus's actions with other party members decide who accompanies him in certain cutscenes and who throws the blitzball during Tidus's Overdrive, Blitz Ace. There is a hidden "affection" value in the game's code, all of the main characters (except Tidus) having an affection value that starts at zero. The values increase whenever Tidus heals a party member, whenever he intercepts an enemy attack intended for another party member using either Guard or Sentinel, and whenever the player speaks first to a party member during times where everyone is spread out across the area. Whenever Tidus attacks another party member, their affection value decreases.

Notable scenes with a high-affection level Lulu are Tidus talking with her in Guadosalam about Yuna getting married, and Lulu riding on a machina sled with Tidus in Lake Macalania. Lulu is the easiest character to rack up affection with, and players generally get her scenes unless they specifically try for another character.

Scenes on the Farplane[]

When the party visits the Farplane in Guadosalam, Lulu overhears Wakka talk to Chappu's spirit. If the player revisits the Farplane after Tidus mentions Seymour's departure for Macalania Temple, they can find Lulu attempting to speak with a woman who doesn't respond. If the party returns to Guadosalam after the events in the Cavern of the Stolen Fayth, Lulu will mourn Lady Ginnem. 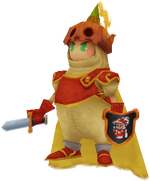 Lulu's Celestial Weapon is named after the recurring job, and bears the sprite of the Final Fantasy III Onion Knight on its shield. The player must search for the coordinates "12, 57" while aboard the airship to locate Baaj Temple where they dive into the water and swim to the northern doors. Geosgaeno will attack, and after it is defeated, the chest containing the Onion Knight will appear in the southern part of the area underwater.

The Venus Crest is found in the Farplane (entered from Guadosalam) after Tidus mentions Seymour's departure for Macalania Temple.

To obtain the Venus Sigil, the player must go to the Thunder Plains and dodge two-hundred consecutive lightning bolts without leaving the area. The game does not show how many bolts have been dodged, and if the player miscounts and leaves the area without dodging enough bolts, their total is reset. Once two-hundred bolts have been dodged in a row, the chest containing the sigil will appear in front of the Thunder Plains branch of Rin's Travel Agency.

Upgrading the Onion Knight with the Venus Crest will allow Shiva to break the damage limit.

The following table lists the abilities the Onion Knight will have after the appropriate upgrade is used.