Lufenia, or Lefein, is a city in the original Final Fantasy. It is the second home of the last members of the Lufenian race, who originally dwelt in a castle in the skies. The Wind Fiend, Tiamat, took over the fortress and so the Lufenians fled and sought shelter on the surface world.

Lufenia does not offer an inn or any other standard town shop except for a hidden magic shop discovered by going to the right wall of Lufenia, then heading up until one gets to a tree and then going right. This shop sells the two most powerful spells in the game, Full-Life and Flare.

Lufenia lies on the eastern "wing" of the northeastern continent, also referred to as the Lufenian continent. Lufenia is surrounded by forest, forcing the player to land the airship at the grassy area northern tip of the wing and make a long trek south to enter Lufenia.

The Warriors of Light cannot understand anything the townspeople say until they have learned the Lufenian language from Dr. Unne in Melmond by giving him the Rosetta Stone. After returning to Lufenia, they learn about their ancient history and receive the Chime, which allows access to the Mirage Tower.

The background music in Lufenia is Final Fantasy's "Town" theme.

In the Reports, the wife of Cid of the Lufaine narrates several of the reports to Lukahn at Lufenia, which is referred to in the reports as "Town on the Hawk's Wing." 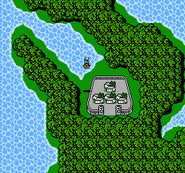 Lufenia on the World Map (NES).

Lufenia on the World Map (PS).

Lufenia on the World Map (GBA).