Noctis's homeland, a sanctified kingdom blessed with the divine Crystal and sacred ring.

The Kingdom of Lucis is a nation in the Final Fantasy XV Universe. It contains Eos's Crystal within its capital, Insomnia. It is ruled by the Lucis Caelum bloodline that is sworn to protect the Crystal and can wield its power. Lucis is described as highly advanced and culturally intact.

Lucis prospers thanks to the presence of its Crystal. This magical artifact alienates the kingdom from the rest of the world, which has fallen under Niflheim's control. Insomnia's Crystal is kept safe from those who would seek to steal it by King Regis, who ages rapidly because he must use the Ring of the Lucii to maintain the Wall around Insomnia. King Regis has a son and heir, Noctis.

Chocobo racing is the national sport of Lucis.

Lucis thrives thanks to its vast realm being home to many ecosystems. There is a nationwide economic disparity between the Crown City citizens and those who live on the outlands, as Insomnia has been isolated from the rest of Lucis for 30 years under the kings Mors and Regis. The outlands suffer from a lack of infrastructural development and decline of major fields of commerce and industry. It is implied in Final Fantasy XV Prologue Parting Ways that the way of life outside Insomnia has stagnated, being in many ways three decades behind the Crown City. Products from Insomnia are valued throughout the outer regions, as they are difficult to come by.

Many varieties of fish exist throughout Lucian waterways. Fish are valued as food and for their components used in consumer products. Hunting is a both a civil service and a contribution to the economy whose goods and game from wild monsters are valued to maintain environmental stability and civil peace. Wild beasts' appendages can be salvaged into tools, crafting materials, and items of luxury.

Many abandoned mining operations litter the realm. Due to the rescaling of the Wall 30 years ago, daemons likely make excavation and extraction work difficult to continue. Personal modes of transportation, such as cars, are also an evidence of the divide, as models now discontinued in the Crown City exist in continued circulation.

Because of the lack of a direct method of obtaining raw earth materials to process into metals and diesel fuels, recycling and scrap re-salvaging is a common practice in the outer lands. Colored stones and ores are valued as a source of paint, building stones for infrastructure, and their accessibility for their sources remaining above ground.

The town of Lestallum and its EXINERIS Industries power plant provides a constant source of electricity due to mining crystals related to the Disc of Cauthess that are used as a power source.

Insomnia seems to run on its own currency, although gil is still usable in the vending machines found there. According to the quest description for "A Pauper Prince", gil is "the currency of choice outside Insomnia." According to Keycatrich's Almanac entry, the town flourished as an intercontinental trading post where the global currency (gil) was circulated while the town was still protected by the Wall. Various debased banknotes and coins are found as treasures, but what abandoned currency they represent is unknown.

The rulers of yore expanded Lucian territory through a variety of means, gradually extending the kingdom's sphere of influence to include the regions of Cavaugh, Leide, Duscae, and Cleigne. The four provinces are peppered with royal tombs, each one erected as a memorial to the king or queen who claimed that land in the name of Lucis.

Lucis was established during the Ancient Era. Solheim had fallen, and the Starscourge had been brought into the world. A mortal man is said to have fought the darkness alongside the gods, and been given special powers to his bloodline, the Crystal to protect, and the Ring of the Lucii. He is said to have became the king of Lucis, a nation established to the east of Eos, and his bloodline would reign for over two thousand years. The Founder King's true name is Somnus Lucis Caelum. One detail of the Founder King's rise to the throne is lost to history, however: his elder brother, Ardyn Lucis Caelum, was originally to take the throne, but he had used his powers to cure others of the Starscourge to absorb the malady into his own body, and was rejected as "tainted". Somnus sealed the now-immortal Ardyn away in Angelgard, an island off the coast of Lucis that was declared sacred ground never to be tread upon.

The nation expanded along the eastern continent of Eos, the monarchs' royal tombs being erected as memorials for the sovereign who claimed that land in the name of Lucis. At some point daemons took hold in Lucis, and a king an Oracle sealed the most ferocious of them in secret dungeons beneath Lucis.

Niflheim declared war on other countries to expand its territory. Their two primary targets were the kingdoms of Lucis and Tenebrae, the latter of which was led by the Oracle. At first Niflheim only had the means to attack the adjacent Tenebrae, but in M.E. 606 they crossed the Cygillan Ocean with their new magitek armor-centric army. The Lucian army, even with their alliance with Accordo, was overwhelmed, and the king erected the Wall around the Cavaugh region that included the Crown City, assuming a siege position. The Lucian army was dissolved and reorganized into a countermeasure-only defense force, the Crownsguard.[1]

Due to the defeat of the allied forces, the Niflheim army entered the areas outside the Wall where they began establishing bases. Niflheim effectively put the outlands under imperial control and turned the fishing village of Galdin into a trading post, connecting the Lucian continent with the imperial province of Accordo. The area turned into a resort after Niflheim stopped using ships for transport in favor of airships.

By M.E. 725 Niflheim had freed Ardyn from Angelgard and gained his allegiance. Ardyn's knowledge and power over daemons allowed Niflheim to develop the magitek infantry, and the empire renewed its full offensive on Lucis in what would become known as the Great War. The Lucian prince Regis Lucis Caelum—who traveled to Accordo with a select few to seek the restoration of an allied force—withdrew to the Crown City due to the Lucian army's defeat. The Wall was pulled back to Insomnia's ramparts to maintain the strength to resist the empire's invasion efforts.[1] In M.E. 734, Ardyn attacked Insomnia with a daemonic Ifrit, but the city was saved when Bahamut spirited Ardyn away.

Between the years 744–756 the conflict between Lucis and Niflheim continued. Niflheim renewed its offensive against Lucis with the attack on Fenestala Manor when Regis, now king, and his son Noctis were visiting Tenebrae. The Leiden hunter outpost housed countless refugees who fled the imperial invasion of the northern city of Keycatrich whose former homes were overrun by daemons. The camp reaching capacity, the refugees split out into the surrounding areas and across the Lucian continent. Although the Lucian-Imperial stalemate became prolonged due to the drastic reduction of Niflheim's military forces in the battle with the Glacian, Lucis remained in the unfavorable position.[1]

On the outskirts of Lucis, the Kingsglaive battles the combined forces of Niflheim and Tenebrae. Feigning a desire for peace, the empire infiltrates Insomnia and steals the Crown City's Crystal. The Wall falls and Insomnia is destroyed by magitek troopers and Diamond Weapons, although a Kingsglaive member called Nyx Ulric commands the Old Wall to defend the city.

When Noctis, Ignis Scientia, Gladiolus Amicitia, and Prompto Argentum learn Insomnia has fallen and King Regis is dead, they traverse the many regions of Lucis to reach Altissia where Noctis is to rendezvous with Lunafreya Nox Fleuret, the Oracle. The Crown City has been overtaken by imperial forces and blockaded, and the magitek infantry patrols the Lucian territories in assault craft. Niflheim continues building military bases and its banners are erected around Lestallum and other outposts. Citizens are assured High Commander Fleuret will keep the peace in Lucis, but it's the brigadier generals, Loqi Tummelt and Caligo Ulldor, who command armies to occupy outposts.

The citizens passively oppose the imperial takeover, celebrating when news comes in that Prince Noctis is still alive, and that the local imperial bases have been demolished by infiltrators. Not many Crownsguard members survived Insomnia's fall, but the remaining members help the Hunters to protect the populace.

After Eos is trapped in an endless night for ten years due to the Starscourge, the world order falls apart. The empire crumbles and daemons take over the world. Lestallum still provides power with its power plant, and as its lights keep the daemons at bay, most people move to live there and the rest of the lands are left abandoned. As depicted in Final Fantasy XV: Comrades, the remaining members of Kingsglaive help fortify Lestallum and to protect the people.

After ten years Noctis and his friends return to the ruins of Insomnia so Noctis can reclaim his throne and fulfill his destiny as the True King by felling Ardyn. As he sacrifices his life to bring light back to the world, and doesn't have heirs, it is unknown what becomes of Lucis afterward.

In the alternate ending to the saga, the light is returned to the world at the cost of losing magic, Astrals and the Crystal, but Noctis and Lunafreya survive.

The Kingdom of Lucis appears as a playable stage in party crossover.

Insomnia is designed to resemble Shinjuku, a part of Tokyo.[2] Black is prominent throughout the kingdom, as is the Grim Reaper. In promotional material for Final Fantasy Versus XIII, a large statue of the entity is seen holding a painting of the goddess Etro. Director Hajime Tabata has stated black is important in Lucis; it is worn by the kingdom's royal family.[3] Concerned about the rating Final Fantasy XV would receive in some countries, Tabata toned down the theme of reaper worship that was prominent in the game's source material. Black replaced explicit references to this.[3]

Cindy gives Noctis and his retinue a map of Lucis when they meet her. However, if one observes the texture of the map as it appears in-game, it looks very little like the actual map of the world, displaying Lestallum in the center with Alastor Slough and Malmalam thicket nearby.

Lucis and its monarchy are associated with large stone statues. Statues of hooded feminine figures appear outside royal tombs, and the tombs themselves have statues of a king laid to rest. The statues of the Old Wall are found all around Insomnia, and there are large hooded feminine statues outside the steps of the Citadel. In old Final Fantasy Versus XIII footage, there was a large statue of a hooded grim reaper holding a painting of Etro. While Altissia likewise has many statues, they mostly depict winged figures. The Almanac entry for Pitioss Ruins describes the "shattered statues seen across the continent" as "testaments to the artistry and ingenuity of those who came before us", referring to Solheim. 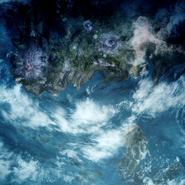 Artwork of the continent.

The symbol of Lucis.

The outlands of Leide.

The outlands of Leide.

The monarch and the Lucian council members.

[view · edit · purge]Lucis, meaning "of the light", is the genitive singular form of the Latin word lux, which means "light".

Lucis juxtaposes Tenebrae, a kingdom whose name means "darkness" in Latin. While Tenebrae represents an "old school" fantasy kingdom, Lucis is technologically advanced thanks to the Crystal it keeps within Insomnia.