Nunotchi
Lucifer is a light-elemental eidolon in Final Fantasy Dimensions II. Lucifer's signet can be obtained for the Deathlord by completing the thirty-sixth floor of Babil Tower for the first time.

Due to the thirty-sixth floor serving as one of the first post-game challenges, Lucifer is one of the Deathlord's best signets at that point in time. Lucifer provides the Deathlord with his strongest boost in HP, while providing balanced attack and magic stats. The signet's Saint Blow series of abilities function as a stronger variant of Aemo's Banishga Blow abilities, making it an ideal move to deal heavy physical light-damage to an enemy and restore HP and MP to the entire party. When combined with the passive of increasing his light damage by 20%, the Deathlord can deal massive damage to enemies weak to light-elemental attacks. Depending on player choice, Lucifer's signet can serve as a helpful signet during the end-game due to its large HP boost.

Lucifer is based on the religious figure from the Christian faith. According to the free-to-play version description, he is based on the recurring enemy that first appeared in the Soul of Rebirth post-game of Final Fantasy II.

His signet artworks reference his descent from a noble angelic servant to that of a fallen angel. His default artwork depicts Lucifer as an multi-winged angelic figure garbed in a white robe and wielding a rapier with a winged hilt. In addition, he carries a mass of holy energy in his right hand. His second signet artwork depicts his robes becoming both white and purple, representing the beginning of his descent. For his final signet artwork, Lucifer's descent as a fallen angel is complete, wearing a black robe that exposes his chest. His rapier's hilt becomes crimson and his original a mass of light becomes tainted with darkness.

The following are the abilities Deathlord can learn from Lucifer: 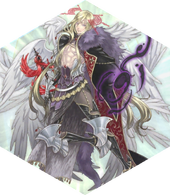 In the original Japanese free-to-play versions, Lucifer's signet became available during the game's time as Final Fantasy Legends: Toki no Suishō. His signet could only be obtained from the game's summon draw shop. Lucifer taught the same abilities as in the premium release of the game and could be equipped by all party members.

By default, Lucifer was able to go up to rank 7. However, the summon was able to go to rank 8 through limit-breaking materials that dropped in raids. He was a SS+ rank signet and had a cost of 18 to equip to a character. 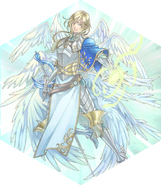 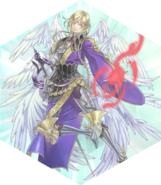 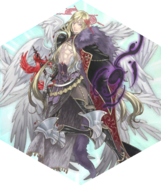 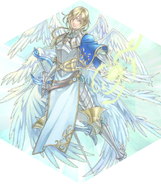 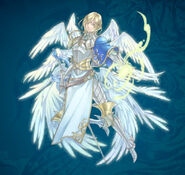 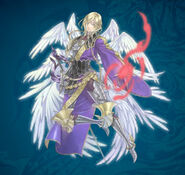 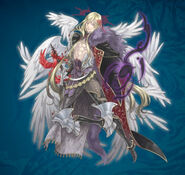 [view · edit · purge]Lucifer is a Latin word (from lucem ferre), literally meaning "light-bearer". In English, "Lucifer" generally refers to the Devil, although the name is not applied to him in the New Testament. The use of the name "Lucifer" in reference to a fallen angel stems from an interpretation of Isaiah 14:3–20, a passage that speaks of a particular Babylonian King titled Morning Star (another name for the planet Venus) as fallen or destined to fall from the heavens. In 2 Peter 1:19 and elsewhere, the same Latin word lucifer is used to refer to the Morning Star, with no relation to the Devil. In post-New Testament times lucifer has often been used as a name for the Devil, both in religious writing and in fiction, especially when referring to him before he fell from Heaven. Lucifer is also one of the Seven Princes of Hell, representing the Sin of Pride, often seen as the worst of the Seven Deadly Sins.