She is the only daughter of the Dwarven King Giott. She studies engineering as Cid's apprentice, mastering the skills of airship steering and maintenance. She yearns for the surface world and frequently travels back there to visit. Luca uses her mechanical dolls Calca and Brina to assist her in battle.

In Final Fantasy IV: The After Years, she has a radically different look, wearing a pink shirt and matching pants, with a matching visor. She sports red-brown and orange bracers and boots, goggles around her neck, and a mole on her cheek. Unlike in the original game, where her hair was brown, her hair is light red. Luca no longer has the shadowed face she did in the original game, stating she "was never a fan of dwarven fashion".

Luca is a tomboy, who enjoys engineering, as and works as Cid's apprentice in Final Fantasy IV: The After Years. She is one of the few female characters who isn't a magic user, serving as a physical fighter. In The After Years, it is stated she has a crush on Palom, one that she wants to keep secret. She is strong enough to put her feelings aside for more important matters, and gives her approval when Leonora states she has fallen for him. Luca is fiercely protective of Calca and Brina, refusing to let Rydia harm them and fending them off alone when the dolls go berserk and turn on them, and refusing to even let Cid look at their mechanics, claiming they're too fragile for him, who is used to airship engines.

Luca is the keeper of the Calcabrina dolls, which fall under the control of Golbez in an attempt to take the dwarves' Crystal. She is the keeper of the key to the Sealed Cave, which doubles as her necklace and entrusts the key to Cecil Harvey so he can protect the Dark Crystal. She later appears in a tank during the attack on the Giant of Babil and then in the Tower of Prayer. In the ending, she attends Cecil and Rosa's wedding with her father.

A year later, the Sealed Cave overflows with monsters and Luca is sent in the Falcon to the upper world to seek help. Along the way she gathers Palom, Porom and Cid before reaching Fabul and recruit King Cecil.

By this point Luca has become one of Cid's apprentices, showing great progress in shipwrighting, and insisting she can pilot the Falcon on her own.

Luca appeared when Cid, Palom, Porom and Rydia visited the Dwarven Castle during a trip to the Feymarch. She had developed a crush on Palom, and did a poor job of concealing it. She accompanied the group to the Passage of the Eidolons but remains on the Falcon with Cid, and while they were gone Luca fixed an engine problem that stumped Cid, deciding to become his apprentice.

Rydia and Luca flee the Underworld aboard the Falcon and retreat to Agart for repairs. They enter a cave and find some of the material they need to fix the Falcon and, depending on if they found the Mythril Nut, Bolt, and Spring, either scrap Calca and Brina for the remaining parts or fix them as well. Shortly after finishing the repairs, they are attacked by the Eidolon Titan.

They are rescued by a man in dark armor and a black mantle. The Man in Black boards the Falcon and urges the pair (or party if Calca and Brina are fixed) to travel to the Tower of Babil before history repeats itself. Joined by Edge Geraldine, the Ninja King of Eblan, they gather the others to break a force field that surrounds the Baron Castle, and then to defeat the Mysterious Girl.

Luca joins the party who embarks the Lunar Whale to stop the True Moon from crashing into the Earth. Within the moon she and Cid repair Calca and Brina into their perfect form and together with the party they defeat the many creatures that emerge from the Crystals, as well as the Creator. Luca is last seen in the Dwarven Castle with Giott, Cid and his grandson fixing an airship trying to figure out if powering it with the Crystals' power would work, and helps Cid disarm the Red Wings.

Luca has romantic feelings for Palom, although she never tells him. Giott mentions she never stops talking about him, although Luca cuts him off in embarrassment. She states she's not going to let herself be distracted by her feelings since she has more important things to worry about, and is happy when Leonora confesses she is also in love with him.

Luca is a strong physical attacker, and wields hammers and axes with heavy armor.

Luca has decent HP and Stamina and high Strength, but low MP and Speed. Her stat growth is nearly identical to Cid's, with the only notable differences being her MP and Speed are slightly higher, though still poor.

Her abilities are Big Throw, which lets her do normal damage from the back row, and Cid's Analyze ability to expose enemy stats. Luca can use the following Band abilities:

Luca can equip the same equipment as Cid, with the addition of the female-exclusive equipment.

In Rydia's Tale, she joins with a Hammer, a Bronze Helm, a Bronze Armor and Iron Gloves.

Luca appears as a playable character.

In the GBA and subsequent remakes of the original Final Fantasy, Luca is one of the names the player can choose for the White Mage job. 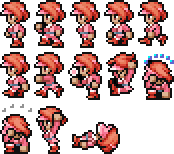 [view · edit · purge]Luca is a male name of Italian origin that means "bringer of light".