Mother will know. When she gets here, she'll decide what's best.

Loz is one of the three Remnants of Sephiroth in Final Fantasy VII: Advent Children. He is described as being the embodiment of Sephiroth's physical strength, as well as his fondness and emotional instability concerning "Mother" that Sephiroth shows during the Nibelheim Incident. While physically the strongest of the three, Loz has a real soft spot, especially on the topic of Jenova, as he apparently cries a lot, a fact that Yazoo points out, often in mockery.

Loz is physically bulky and muscular. His silver hair is short and slightly spiky with sideburns, and he has green eyes with cat-like pupils, the same as Sephiroth. He wears his weapon, the Dual Hound, on his left arm, and uses a Velvet Nightmare handgun otherwise. His torso is covered with crossing black straps and shoulder guards. He wears a tight full body suit of black leather.

Of the three remnants, Loz is the most child-like. Director Tetsuya Nomura has stated Loz was meant to be a stylized version of Sephiroth's strength, but grudgingly admitted he could easily be described as "all brawn and no brains".[citation needed] In some scenes Loz can be heard making sound effects, such as "bruum!" when driving his motorcycle off the cliff in his opening scene, and "bang, buh buh bang!" when firing at a helicopter piloted by Reno, highlighting his childishness.

Loz is a powerful hand-to-hand combatant, possessing super-strength and speed that allow him to overwhelm opponents. He can shatter trees and stone pillars, and flip his motorcycle with his legs with one hand supporting him on the ground. The Dual Hound accents Loz's strength, and with it, he can unleash jolts of electricity and send a shockwave through the ground. Loz appears to move in a blur of blue and white energy, and at times he moves so quickly he appears to teleport.

Loz watches Cloud Strife drive through the wasteland around Midgar, and attacks him with Yazoo and Shadow Creepers summoned by Kadaj. Although the battle turns in their favor, Kadaj contacts Rufus Shinra and calls back the Shadow Creepers, and Loz and Yazoo also leave.

While Kadaj goes to see Rufus, Loz goes to the Sector 5 slums church, believing Jenova may be there. Tifa Lockhart and Marlene Wallace are already there, and when Tifa claims she does not know where Jenova is, Loz requests she "play with him". Although Tifa gains a momentary advantage on Loz, he rises unharmed, and after a phone call from Yazoo, exploits his speed to easily defeat her. Loz kidnaps Marlene and takes a chest of Materia Cloud had been keeping at the church, and returns to the Forgotten City with his brothers.

When Cloud arrives at the city he battles the three, and Loz and Yazoo overwhelm him by combining their abilities. Vincent Valentine saves Cloud and the three brothers return to Edge. While Kadaj meets with Rufus, Loz and Yazoo attempt to destroy a monument to the fall of Meteor, but are interrupted by Reno and Rude of the Turks. When Reno refers to "Jenova's friggin' head", Loz childishly calls him a "meanie". As Kadaj summons Bahamut SIN, Loz battles and defeats Rude.

When Cloud and his friends defeat Bahamut SIN, Rufus reveals Jenova's remains to Kadaj. Retrieving them, the remnants drive onto the highways leading into Midgar, pursued by Cloud. Delaying him from reaching Kadaj, Loz, and Yazoo battle him and Loz is exceedingly reckless in his attacks. At the end of the chase, the Turks have arrived ahead of their path via helicopter. Cloud, having gained a lead, drives by, and Loz and Yazoo are caught in the explosion of the bombs Rude and Reno brought with them.

Assumed dead, Loz and Yazoo return when Cloud defeats Sephiroth, and attack him with dozens of Materia orbs forced into their bodies. Already dissolving in healing rain called down by Aerith Gainsborough, the two are consumed in the explosions of their own spells and are destroyed at last.

Loz appears as a legend. 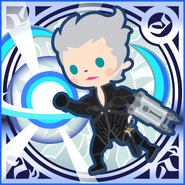 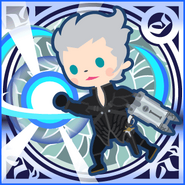 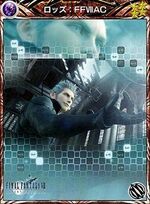 Loz was designed as a stylized version of Sephiroth's strength, and is described by writer Kazushige Nojima as having "a little something missing upstairs". Loz's lines about "playing" with Tifa during their battle were inspired by Nojima's own son. Loz's super speed forced the film staff to create a new CGI tool just to animate his fight scenes properly, which they called the "Loz Warp Tool". The tool was used to slow down the film for the other characters while Loz moved normally, so he would be able to move much faster than them.[citation needed] Loz's fight scenes and movements were made dynamic and over-the-top to draw back to his great strength and childish personality.

The entire fight sequence between Loz and Tifa was duplicated in the music video for the Korean pop singer Ivy MV's "Temptation of Sonata", albeit with minor changes, such as small parts of the fighting choreography being altered due to the absence of Loz's Dual Hound, and Tifa's victory by snapping Loz's neck at the end. The music video was banned on TV and singer Ivy was sued by Square Enix.

Loz's ringtone is the "Victory Fanfare", as heard when Yazoo calls Loz while he is buried underneath rubble, during his fight with Tifa. The timing of the call is apt, as it rings after Tifa defeats Loz.

Loz's Japanese voice is Kenji Nomura. Nomura originally thought Loz was a cool character during his battle with Tifa and voiced him with such a vision in mind, but was corrected by the directors that Loz was intended to sound like an idiot.

He is voiced by Fred Tatasciore in English who also voices Don Corneo in Final Fantasy VII Remake.