After the Archadian Empire took over Rabanastre, many locals were forced to move below the street-level and now Lowtown is as booming with activity as the upper town. Vaan lives in Lowtown along with many other orphaned children. Old Dalan tells Vaan how to sneak into the Royal Palace of Rabanastre via the Garamsythe Waterway, but the plan goes awry, and when Vaan and his new friends get back to Lowtown, they find imperial soldiers waiting for them and are immediately arrested. Vaan's friend Penelo tries to intervene but is stopped by Vaan's new acquaintance, Balthier. After Vaan returns from the Nalbina Dungeons, Dalan gives him a sword of the Old Order to deliver to Captain Vossler who is hiding in a resistance base in Lowtown.

The Wraith hunt can be undertaken after escaping from the Barheim Passage. It is found in the Overflow Cloaca of the Garamsythe Waterway, and its petitioner is Milha in the North Sprawl. Defeating the Wraith allows the player to enter a private residence in Lowtown and pick up the Dusty Letter key item, part of a later sidequest that tells in which order the sluice gates must be operated in the waterway.

The Ring Wyrm is a Rank III Mark that becomes available after the player vanquishes the Wyvern Lord. It can be found in the Windtrace Dunes area of the Dalmasca Westersand during a sandstorm, but its petitioner is Balzac in the North Sprawl, outside where Vaan and Basch met with Vossler and the Resistance earlier.

With the Windvane, the party can access the northern part of Westersand, previously blocked off by a sandstorm.

After the last gate is closed, a click is heard and south in the same semi-circle area, on the ground, there is a glittering object, the Dull Fragment.

To get the Grimy Fragment, the player must return to Lowtown and go to Old Dalan's place and speak to the nu mou known as Roh'Kenmou. In order for Roh'Kenmou to appear at Dalan's place, the player must have first spoken to Ma'Kleou in the Nabreus Deadlands. Filo is around the South East area of Lowtown and mentions the kids are also looking for the medallion. In Rabanastre's central section, Southern Plaza, there is a "Curious Woman" looking at the fountain.

After talking to the "Curious Woman", the player should walk to the Muthru Bazaar and speak to the bangaa merchant just after passing the Clan Provisioner about the necklace to get the information, then head to the Magick Shop and speak to the "Sotted Imperial", the soldier sitting in the left corner, and choose the first option. Back in Lowtown, the player should talk to Filo again and choose "Let's Go" for some events to get the last fragment, the Grimy Fragment. 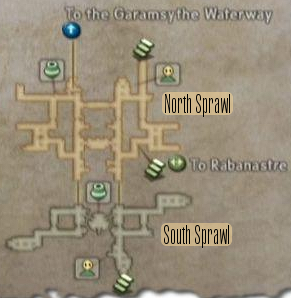 North Sprawl banner.
Add a photo to this gallery