I have a favor to ask. Take the notebook with you when you go. That's not all. I want you to put something in the book and send it back.

Lovers' Notebook is a red notebook Lunafreya Nox Fleuret and Noctis Lucis Caelum use for secret correspondence. It is a small leather journal with a golden sylleblossom pattern on the front.

When Noctis was eight years old, he visited Tenebrae and met Lunafreya, the young daughter of the Oracle. The two quickly befriended and Lunafreya showed Noctis her notebook with a pressed sylleblossom inside, asking him to use it once he went back home so they can send it back and forth. After the Niflheim Empire attacked Tenebrae, Noctis and Lunafreya became estranged, but would keep in contact via the notebook that was delivered between them by Lunafreya's magical dog Umbra. She usually sends pictures and flowers, while Noctis sends back pictures and stickers. When a 20-year-old Noctis departs on his road trip to Altissia to wed Lunafreya, he meets Umbra at an outpost and sends a message to let her know he is on his way.

Things do not unfold as planned. Insomnia is attacked by the empire and Noctis starts his journey to reclaim his kingdom by collecting the royal arms of his forebears and forging covenants with the Astrals with Lunafreya's faraway help. Shortly after Insomnia's fall, Umbra reconvenes with Lunafreya, who had safely escaped from the city, and delivers the notebook to her, supplying proof that Noctis has survived the kingdom's fall, much to her relief. He periodically meets Umbra and learns through the notebook of Lunafreya's wellbeing, her support for him, and that she is looking forward to reuniting with him.

After Leviathan's trial Noctis awakens days later to discover Lunafreya has died. He inherits her notebook, and finds Lunafreya's final message to him is another pressed sylleblossom. Noctis keeps the notebook as a keepsake.

In Final Fantasy XV -The Dawn of the Future-, Lunafreya is revived ten years in the future when the world has already fallen to darkness, and starts to use a new, smaller notebook for Noctis to read as she waits for his return from his slumber inside the Crystal, recording her new adventure in great detail. Her final message is for him to meet her at the Citadel, before leaving the book with Umbra. When Noctis awakes, he finds Umbra waiting for him with the notebook, and learns that his beloved has returned. When questioned why he doesn't send the notebook back with Umbra, Noctis says is time to deliver it in person.

Whenever Umbra delivers the notebook to Noctis, the player can choose the message to send to Lunafreya. Depending on the player's responses, the item description for when Noctis will keep the book changes. The item is called "Lovers' Notebook" in the key item menu.

In Platinum Demo – Final Fantasy XV, the Lovers' Notebook is among the pile of books in the room in Altissia.

On 2017 February's ATR, Director Hajime Tabata explained that the reason why Noctis and Lunafreya don't communicate through cellphones is because phones only exist in Insomnia.[1]

In the flashbacks the notebook appears brand new, whereas in the present time, the cover has faded.

The black notebook Ignis uses to write down recipes seems to be a modified model of the Lovers' Notebook, as it has a pressed sylleblossom on the page next to the one he writes on. This cannot be seen in a normal playthrough, as the default camera only ever shows the cover.

Datamined dialogue from the game files show an extended introductory scene of the notebook that did not appear in the final game.[2]

Square Enix Cafe has sold a blank notebook of the Lovers' Notebook design that includes a separate sheet with the same stickers that appear on it through the game.

Sylleblosom sticker placed on a page as seen in the game. 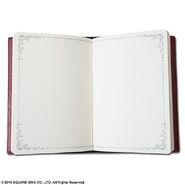 Blank pages of the notebook with detail on border. 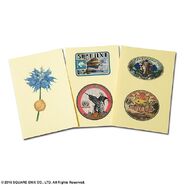 Stickers included with the notebook.

Notebooks on display for sale. 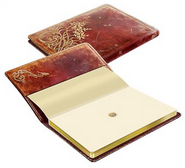 A pressed sylleblossom in the book.

Noctis reads the notebook before heading off to Altissia.

The notebook in the Brotherhood Final Fantasy XV anime.

Lunafreya reads the notebook in Tenebrae.