The wise and wizened former leader of the Circle of Knowing, a fellowship of learned individuals hailing from the far-northern island nation of Sharlayan. In seeking to forestall the calamitous arrival of the Seventh Umbral Era, Louisoix invoked the power of the Twelve, Eorzea's pantheon of guardian deities. Alas, he disappeared amidst a blinding light following the ritual, and has not been seen or heard from since.

Louisoix Leveilleur is a prominent non-playable character in Final Fantasy XIV. He is the leader of the Circle of Knowing, a group involved in the Seventh Umbral Era storyline. He is most notable as the NPC involved in all quests related to primals in version 1.xx. In A Realm Reborn, he acts as the narrator at the beginning and has a more relevant role in the Binding Coil of Bahamut's storyline.

He is the father of Fourchenault Leveilleur, and the grandfather of Alphinaud and Alisaie Leveilleur.

To ignore the plight of those one might conceivably save is not wisdom—it is indolence. And such a passive stance will not, I fear, take us far upon the path to progress. That you would spare these younglings the horrors of war is a decision with which I am in full agreement. Thus do I refrain from exhorting you, or any other, to return to Eorzea at my side. We must all protect that which we hold most dear in the manner of our own choosing.

One of Sharlayan's most respected sages, Louisoix was rivals with the witch Matoya. During a journey to Limsa Lominsa a young Thancred Waters attempted to steal from him, but was thrown to the cobbles by Louisoix and was offered a chance to offer his fellow man in Sharlayan. He founded the Circle of Knowing to intervene in the prophecy of the Seventh Umbral Era outlined in the Divine Chronicles, allowed to act as he pleases by the Forum despite going against Sharlayan's neutrality policy as promoted by the dominant Bibliothec faction. This destroyed Louisoix's relationship with his eldest son, Fourchenault Leveilleur, who considered his father's actions foolish.

Before traveling for Gridania in response to the appearance of the primal Ifrit, Louisoix gave his grandchildren Alphinaud and Alisaie a matching set of grimoires, the twins unaware their tomes were halves of a larger grimoire, signifying Louisoux's wish for his grandchildren to understand each other and share a common goal.

Arriving to Eorzea, Louisoix used his skills and connections to help the adventurer gather the items needed to enter the primals' lairs. He joined the Eorzean Alliance under Gridania's banner as their chief tactician, and Gridania's newspaper, The Raven, credited him with initiating the Alliance's shift to the offensive, as well as ushering the adventurer to join the battle. When the Seventh Umbral Era drew near, Louisoix and the Circle of Knowing marked stones throughout Eorzea with the symbols of the Twelve, and urged the adventurer to offer prayers to each with the hopes of summoning the gods to avert disaster.

Once the final battle before Dalamud's fall began, Louisoix supported the Eorzean Alliance. When Dalamud shattered and Bahamut escaped his imprisonment, Louisoix attempted to call upon the powers of the Twelve to re-imprison the Elder Primal. The spell failed, and all Louisoix could do was teleport the adventurer away. As Louisoix awaited his fate at Bahamut's hands, he received a vision from the Twelve along with their blessing and was infused with aether—this, plus the fervent prayers of the people of Eorzea for salvation, transformed him into a primal. Taking to the skies, Louisoix pierced Bahamut's Teraflare, creating a barrier to repel the massive fireball, only for the Elder Primal to immediately shatter it.

In one last desperate attempt, Louisoix released a massive burst of aether that caused Bahamut's Teraflare to lose its form, crumbling in midair as it harmlessly turned to crystallized aether. Louisoix pushed Bahamut out through the other side of the crumbling Teraflare where he penetrated the Elder Primal's chest. With Bahamut defeated, Louisoix allowed his body to disperse into the aether and return to the land as Bahamut broke apart and exploded, igniting the crystallized Teraflare around him and devastating the surrounding land. Unbeknownst to Louisoix, Bahamut was not truly destroyed, and what remained of the Elder Primal attempted to ensnare his mind. Weakened as he was by returning much of his aether to Eorzea, Louisoix was unable to resist becoming Bahamut's Thrall.

Kan-E-Senna recovered Louisoix's shattered staff and returned it to the Scions of the Seventh Dawn (the successors to the Circle of Knowing). Minfilia Warde keeps it in the Solar of the Scions' headquarters.

During the Warrior of Light and Alisaie's journey into a fragment of Dalamud known as the Binding Coil of Bahamut—an Allagan system designed to rebuild Bahamut in the event of his destruction—Louisoix watches the party as they enter but disappears before being noticed. Following the defeat of Twintania, Alisaie sees her grandfather with an imitation of Nael deus Darnus as they depart further into the Binding Coil.

In the Second Coil of Bahamut, Louisoix makes his presence known after Nael deus Darnus is removed from Bahamut's control by slaying her before she can speak to Alisaie. Louisoix presents himself as another thrall of Bahamut while warning Alisaie and the Warrior of Light not to meddle in the Elder Primal's resurrection, threatening that he would not hold back if they continued to oppose his master.

Within the Main Bridge of the Final Coil of Bahamut, Louisoix appears before Alphinaud, Alisaie, and the Warrior of Light. He reveals Bahamut's origin and how the Allagan Empire imprisoned dragons of Meracydia and the Elder Primal within Dalamud to further enhance their power. Louisoix berates humanity and tells the party there can never be peace as long as humanity exists. When Alphinaud guesses Louisoix's new nature as a primal, he transforms into the Phoenix and attacks them. Freed from Bahamut's control upon his defeat, Louisoix reveals the events that transpired during his confrontation with Bahamut. Louisoix tells his twin grandchildren to find their own paths while giving them the means to summon his Phoenix incarnation, and gives Alisaie peace of mind before opening a portal for his grandchildren and the Warrior of Light to stop Bahamut's resurrection.

There are records of an art that allowed one to summon the power of a primal from the essence of its demise. And though I am no true primal, all that I have left, I give to you. Alphinaud. Alisaie. My darling grandchildren. May light's blessings ever keep and protect you.

After Bahamut's final defeat, Alphinaud and Alisaie keep Louisoix's transformation into Phoenix a secret, fearing that if it became known, people seeking salvation might attempt to summon him, something they knew would be against his wishes.

Louisoix is an elderly Elezen wearing a white-gray stripe-patterned acton, armored leggings, and a horned staff—the Tupsimati—bearing the mark of Thaliak. He bears the Circle of Knowing tattoo on both his forehead and neck. He has brown skin, white eyes and hair with a beard, and a receding hairline.

Louisoix, like the rest of the Circle, was well-spoken and informed. He was known for his wisdom, offering guidance and encouraging the Warrior of Light to overcome the daunting primal threat. His sacrifice for Eorzea was regarded with awe and respect, such as by Kan-E-Senna. Louisoix was convincing with his beliefs, encouraging others to follow in both his and the Twelve's teachings. His determination to spread the knowledge from Sharlayan outside of its borders brought him criticism from his homeland, even from his own family; however, his renown and earned respect allowed him to travel to Eorzea and speak with others in its borders.

Louisoix is fought as the boss of the The Final Coil of Bahamut - Turn 3 in his primal form, Phoenix.

He makes an additional appearance during the Unending Coil of Bahamut in his Phoenix form, whereupon he casts Flames of Rebirth on the players after a forced party-wide attack renders all players incapacitated.

Louisoix appears on a sticker set for the LINE communications app. The sticker set he appears in is titled "ファイナルファンタジーXIV.[1] 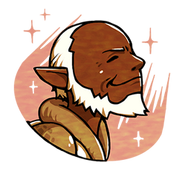 It is implied that the horn on the Tupsimati is similar to the horns featured in 1.0 main storyline quests.

As part of a New Years greeting from the development team of A Realm Reborn, Director Naoki Yoshida included a prophetic verse from Louisoix. Upon comparison between language versions, the consistent message implies one of two entities will decide the fate of the world through actions taken on the primals: one entity of light and one of darkness/might.

Louisoix is voiced by Motomu Kiyokawa in the Japanese version and David Lodge in the English version.

In-game render from A Realm Reborn.

Louisoix CG Render in the A Realm Reborn trailer.

Louisoix tempered by Bahamut during the Binding Coils.

Louisoix, as seen in Tales from the Calamity: In Louisoix's Wake.

Louisoix speaking with a young Minfilia in Tales from the Calamity: The Walker's Path.

A journal entry written by Louisoix.

The French version of his journal entry lists him as "Louisoix le Preux", or "Louisoix the Valiant". This does not conflict with his English surname as it is a title.

The German version ends with "Aus Louisoix Hinterlassenschaft", which roughly translates to "From Louisoix's Legacy". The Legacy Campaign is a promotion to give discounts and bonuses to players who stayed with the game after billing resumed January of 2012.