Louhi, the Witch of the North

Boss
Louhi, the Witch of the North is a non-player character and a minor antagonist in Final Fantasy: The 4 Heroes of Light. She is the witch who kidnapped Princess Aire.

Louhi is a pale woman with long silver-white hair and blue eyes. She wears a long black dress with a long light purple cape attached to the shoulder pads, black boots, and a silver headdress. Some artwork gives her darker-colored skin.

Before the events of the game, Louhi is approached by Satan, under the disguise of King Horne, to make a deal for the magic spell Desolator. Louhi decided to accept the deal, but would only agree if Satan gave her Princess Aire. With the deal made, Louhi would be allowed to take Aire away from her father fifteen years later.

On the day the game starts, Louhi kidnaps Aire away from the castle and takes Aire to her manor. Brandt, Jusqua, and Yunita are sent to save Aire and at the balcony of her manor, the party finds Aire and tries to take her back. Louhi intervenes, transforms into the monster Greaps, and attacks the party. After the party defeats her, she states the contract will never be broken, even through death. When the party returns to Horne, they discover everyone has been turned into stone.

After being sent fifteen years into the past, the party goes to Louhi's manor in to stop the deal from happening. Louhi transforms into Greaps but is defeated by the party. Louhi attempts to fight the heroes but is stopped by Rolan. Rolan and Louhi reveal to the party that King Horne was turned into a parrot by the demon Satan, who is assuming his form. The two instruct the heroes to find the Lamp of Truth to reveal Satan's true form so they can defeat him. The party defeats Satan and prevents the deal from ever happening. Louhi remains in her mansion for the remainder of the game.

Greaps is fought three times in the game, two times at the Witch's Mansion and a third time in the Trial Tower.

Artwork of the Yunita and Louhi. 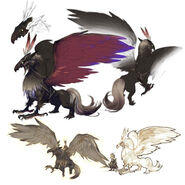 [view · edit · purge]Louhi is a witch from Finnish mythology, mentioned in the epic poem Kalevala. She rules the lands to the north, the Pohjola, and has the power to shapeshift and invoke powerful magical spells. It also relates to lohikäärme, a Finnish term for dragon.