Final Fantasy Wiki
Register
Don't have an account?
Sign In
Advertisement
in: Characters in War of the Visions: Final Fantasy Brave Exvius, Rangers

Kelly Baskin
Loreila is a playable character in War of the Visions: Final Fantasy Brave Exvius. Known as the Wise Believer in Bonds, she is the current chieftainess of Gouga. She seeks to enact peace by unifying the warring shinobi clans of Gouga and Saiga.

Loreila is a young woman with long, dark hair tied into two ponytails with scarlet red ribbons. She wears an altered, sleeveless black hakama lined with a golden trim at its skirt fringes. She wears a black chestplate, a black armguard, and a black archer's glove on her left arm and a red armguard on her right. Her hakama's ribbon is a light scarlet, lined with a golden and green trim and several trinkets at the front. She wears a long white jacket around her waist, befitting the chieftain of Gouga, with a red cape lined with golden fixtures symbolizing her homeland. She wears armored, black high-heeled boots.

Loreila is a stoic person who dreams of peace between the warring clans of Gouga and Saiga. She is a tender and passionate woman towards Skahal, her lover. Her leadership is overshadowed by her hesitation and unawareness of political situations. Her flippant attitude towards her role as chieftain of Gouga is noted by the people from her clan, especially Mariale. Loreila talks of ending the war, but does not consider fully the war's role in supplying her people with their professions and livelihoods.

Loreila insists on protecting Skahal from people of her own clan. She is devoted, willing to sacrifice herself for the object of her affection. As a warrior, this stubbornness complements her abilities in battle, making her an effective killing machine.

Gouga and Saiga: Part I[]

Skahal lies exhausted on the ground after killing many elite soldiers while surrounded by Rundall's forces who expected no less from the chief of Saiga. Skahal proclaims that he will not die here though he can barely stand. A soldier assures that they won't kill Shakal just yet, mentioning that there seems to be a movement to unite the shinobi villages of Gouga and Saiga, and that King Jayden will be pleased with the news. Skahal stands and declares that he cannot let them leave alive with that information and engages the soldiers once more.

After confronting the last soldier, a shinobi attacks the latter from behind. The Rundall soldier says Skahal wasn't ready to lead Saiga, about to enact the finishing blow, when a young woman dashes onto the scene. The Rundall soldier recognizes her as Loreila, and wants to confirm Gouga and Saiga's plan of uniting from her. Loreila takes out her bow, but the soldier vows to kill the chief of Saiga and them to "have their fun" with Loreila. Loreila threatens them to not lay a finger on him. The Rundall soldier is intrigued, having heard that if given the right price, people from Gouga would kill their own parents. Loreila claims that her Gouga will be different.

After routing the Rundall soldiers, it has started raining in the plains. Loreila tends to a fallen Skahal, whose bleeding has stopped due to the medicine he took. Loreila tells him to return to his village and rest. Skahal apologizes that Loreila had to betray Rundall because of him. Loreila tells him there's nothing to apologize for, as there's no just cause for Rundall to invade Ovis the way they did and she only joined Rundall to support her clan. She has come to realize that she cannot bear their actions. Skahal reminds that some in Gouga are hostile to Saiga. Loreila says it is mainly Mariale, who thinks Loreila stole the role of chieftainess from her. Skahal deduces that Mariale knew Saiga would help Ovis and thereby offered Gouga's support to Rundall. Loreila confirms, and reveals Mariale had said they need to ally with Rundall to eliminate Saiga. Loreila did not have the power to stop Mariale, but if the battle ends, she is certain everyone in Gouga would consider the village's future with clearer minds and nothing good would come of battle between fellow shinobi.

Skahal asks if Loreila would leave Gouga if she could not gain their acceptance, deeming her better suited to Saiga. Loreila wants to do everything she can for Gouga's sake as it is her home. Skahal understands and both wish they could stay in their embrace forever, but the villagers need Loreila. Skahal is fine to go back to Saiga alone though his wounds are still open, as he will take his time by taking a secret path back. They bid farewell.

Loreila is about to cross a bridge, when Mariale accosts her to ask where she's been, with Loreila answering that she was on the battlefield. Mariale is impressed someone like Loreila could become the chief of Gouga, but Loreila retorts she wanted the fighting to cease and that the elder had felt the same way. Mariale tells Loreila to cease her nonsense, as she has wanted for nothing as the elder's only daughter. Mariale says that the rest of Gouga feel differently, as they would lose their livelihoods were the fighting to stop, as the land they inhabit cannot yield crops. Mariale is sick of living in a dark and damp cave. A voice tells Mariale that she shouldn't need to worry about that. Zazan the Unkillable approaches the two, Mariale happily explaining she brought him to Gouga as he displayed promise. Loreila asks why Mariale didn't consult her about inviting a wanderer to Gouga, as they know nothing of Zazan. Mariale reveals that Zazan has brought them some interesting information: a rumor that Saiga's chief, Skahal, has been having secret rendezvous with someone from Gouga. Loreila is shaken and states that it's just a rumor. Mariale says that may be the case, but she trusts Zazan's background as Rairyuu was the one who sent him to Gouga.

Zazan notices the scent of blood on Loreila, and proclaims the rumors about Gouga are true. As Zazan says he's ready for work, Mariale tells him of a new mission she had heard from their scouts. The chief of Saiga is heavily wounded and is currently escaping, and Zazan goes off to hunt Skahal down, promising to have his head for Mariale. Mariale tells Loreila that she needs to find something more chiefly to do in the meantime. Loreila proclaims that she needs to stop Zazan and runs after him, intriguing Mariale.

Loreila needs to reach Skahal before Zazan can find him, but is alarmed to smell blood. She finds Skahal surrounded by Gouga shinobi, who tell him he won't last long as Loreila is there. Loreila tells the shocked shinobi to let Skahal go and to return to the village as she'll take care of it. The shinobi protest as Skahal, the chief of Saiga, is a big target. Loreila reminds the shinobi that she became chief to stop the fighting, and to accomplish her goal, they need to join with Saiga. The shinobi say that Mariale was right: someone in Gouga was communing with the enemy.

Another shinobi is shocked the traitor turned out to be Loreila, taking a swing at her. Loreila runs to Skahal's side who tells Loreila to flee. Loreila tells the shinobi she'll only ask them one more time to leave. The shinobi are incessant, but Loreila tells them nothing good will come of a battle between the two clans. The shinobi has a better idea: bringing back the heads of the chief of Saiga, and the traitor of Gouga, will have them handsomely rewarded. Loreila is shocked, with the shinobi continuing that Saiga will fall and Gouga will have a monopoly on the mercenary business. The shinobi brandish their blades as Skahal tells Loreila to run. Loreila posits that a village thriving at the expense of others doesn't need to exist, and promises to protect him.

Skahal and Loreila emerge victorious, but Mariale arrives, calling it ironic Loreila talks about ending the fighting and yet is the one to bring about all the death. Mariale bluntly asks if Loreila just wants to be with Skahal without care over how many of her own people need to be sacrificed for it. Mariale is disgusted and calls Loreila a traitor. Loreila bows her head in shame, as Skahal tries to explain. Mariale commands Zazan to act, who tries to stab Skahal but Loreila steps in to take the blow, ending up impaled on Zazan's sword. Mariale comments on Zazan's moniker, stating him to be a master at playing dead.

Skahal says it's unforgivable, but Zazan says Skahal is already surrounded by Gouga shinobi and calls it the end of Saiga. Skahal vows to send Zazan to his grave, while Zazan gives the shinobi the order to kill him. Skahal chants a ritual that takes out all of the shinobi. Zazan is bewildered how Skahal could accomplish that while on the brink of death. A voice elates having found Skahal and Saiga shinobi surround him, Zazan frustrated that reinforcements have arrived. Mariale tells Zazan to withdraw, with Skahal cursing at Gouga and vowing their villages will never be one. Skahal proclaims to crush Gouga and erase it from the world. Mariale becomes the new chief of Gouga, in turn swearing to destroy Saiga.

The new chieftainess of Gouga. She was appointed by the previous chieftain out of concern for the future of the village following its descent into a self-serving band of murderers. In a twist of fate, she fell in love with the new leader of Saiga and has come to believe that the two villages should unite.

Loreila is an MR-rarity unit of the Wind element whose main job is Ranger, while her sub jobs are Viking and Knight. She can equip the following items: Bow, Hat, Clothing, Accessory. Her unit cost is 60.

Her Master Ability increases her own Critical Hit Rate by 50. She has no limit burst.

A legendary bow spoken of in Gouga. The wielder's heart empties in the moment a shot is made, allowing them to pierce their target with unwavering precision. Its former wielders came into contact with the death of many, gradually hardening into unfeeling, unflinching assassins. Loreila, too, was aware of the fate of its previous wielders, but nonetheless she took this bow in hand to protect her loved ones.

Blossoms in the Dark

Skahal and Loreila first met some years ago when they succeeded the chieftainship of their respective clans, Saiga and Gouga.
Though they were nothing more than strangers at first, they soon came to comprehend each other's position when they met once again during a summer evening respite in a small village. However, by this time, it was already too late to extinguish the feelings that grew between them.
The very night they were reunited, the pair snuck away from the village and enjoyed fireworks together in secret. While these fireworks were nothing more than small sparks of flame that could be dangled by hand, in the darkness of night, they glowed like incandescent flowers. The two sat staring at the fireworks, well aware of the feelings that resounded in their hearts—and that this moment was one that would not last long.

Blossoms in the Dark is a UR-rarity vision card with a cost of 80. At Lv. 99, its stats are HP +232, MAG +186 and LCK +20. Its Party Abilities are Man Eater Upon Magic Attack Up 25 and Lightning Unit Strike Attack Res Up 20. Its Limited Bestowed Effects are MAG Up 10% for Staff-wielding job classes only, as well as Magic Attack Up 20 for Skahal only and ATK Up 30% for Loreila only. Its Vision Ability is Ruinja, which can only be used by Staff-wielding job classes and deals Non-Elemental Dmg (XL) to target based on caster's MAG stat. It was illustrated by SQUARE ENIX. 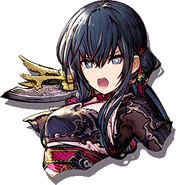 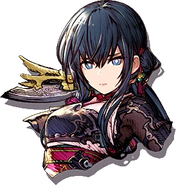 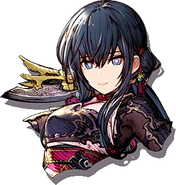 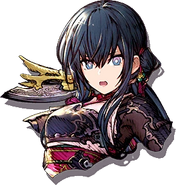 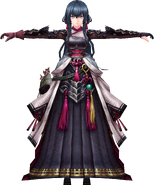 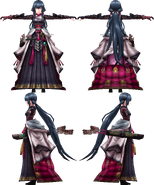