Its claws inflict poison. Restores lost HP by sleeping. Retaliates with Earthquake if awakened, so watch out. Being a plant, it burns easily.

Lord Ochu is an Ochu-type fiend in Final Fantasy X found sleeping at a crossroads in the Kilika Woods. The fight can be avoided by taking a different route, but courageous players can approach and awaken the monster. Avoiding the boss the first time through the woods, allows it to be bribed later for an easy one-time source of cheap Remedies for 92,980 gil.

It has the same model as the Mandragora. Lord Ochu uses the normal battle theme. The party can also flee from the battle.

The Ochu is no garden variety fiend. We could throw a hundred Crusaders at it and still lose.

Lord Ochu can inflict Poison with its normal attack. Being a plant, it is vulnerable to Fire. After losing 2,500 HP, Lord Ochu will fall asleep and regenerate HP. It can be woken with a physical attack, but will immediately react with Earthquake; the damage can be avoided by summoning Valefor, who, due to being an aerial aeon, will evade the attack. If attacked with magic while asleep, it will not wake up, but will counter with Earthquake the next time it is targeted while awake. After using Earthquake, Lord Ochu will fall back asleep after losing another 2,500 HP.

Lord Ochu will open with Poison Claw, then follow an attack pattern of Poison Claw, Water, Poison Claw, Poison Claw, and Water. Against aeons, these moves are swapped. As this is not an ordinary boss fight, if the going gets too tough, the party can escape at any time.

If the party approaches Ochu from the left or west, and then flees the battle, the nearby crusader will run up and give three Phoenix Downs.

When it is defeated, Luzzu will hand over an Elixir when spoken to after the fight, and the Crusader to the west of where Lord Ochu was will give the party a NulBlaze Shield.

The player should first talk to Luzzu, who will hand over four Antidotes. Lulu's Fire spells come in handy in this fight. 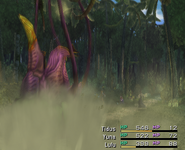 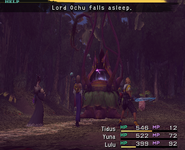