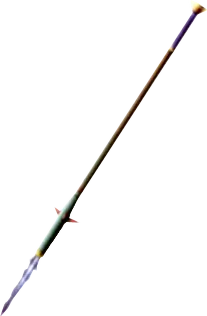 Legendary lance meant to pass judgment on the world. Doubles power of Jump attacks with equipped.

The Longinus (ロンギヌス, Ronginusu?), also known as the Spirit Lance, is a weapon in various games in the series. It is generally a powerful lance.

An ancient spear fabled to have wounded an immortal.

The Longinus appears in the PSP/iOS editions as Leon's ultimate weapon. It can be found in the Arcane Sanctuary, and provides 155 Attack, +50 Strength, and +30 Stamina, Spirit, and Agility.

Longinus provides 132 Attack, 100 Accuracy, and it gives a +2 bonus to Strength. It is found in the Sealed Temple in the Advance remake.

Legendary spear said to hold sway over the world.

In the Advance and 2014 versions, the Longinus is Edgar's strongest weapon with an Attack power of 235, +7 Strength, +3 Speed and Stamina, and enables the Runic command, though it does not grant Jump bonuses. It can drop from Storm Dragon at the Dragons' Den, or won through the Dragon's Neck Coliseum by betting the Gungnir.

Cid's Spirit Lance (Longinus in the Japanese version) provides 92 Attack, 112 Accuracy, and 43 Magic, as well as +20 Spirit. It has two linked Materia slots at normal growth, and can be found in the Sunken Gelnika.

The Spirit Lance (Longinus in the Japanese and European versions) is Kimahri's Celestial Weapon. Fully upgraded with Saturn Crest and Sigil (Jupiter in some versions), it has Break Damage Limit, Triple Overdrive, Double AP and Evade & Counter. It ignores target's Defense. It deals more damage as Kimahri's current HP is closer to his max HP.

Longinus is a dummied spear for Oerba Yun Fang which reuses the model of Kain's Lance.

This section about equipment in Final Fantasy XIII is empty or needs to be expanded. You can help the Final Fantasy Wiki by expanding it.

Longinus is the Zodiac Weapon for

Dragoons. It is acquired via the quest

His Dark Materia, by combining reagents acquired from assorted other side quests with a materia created from Gae Bolg Nexus, the final stage of the Dragoon's Relic Weapon. Longinus can then be upgraded to Longinus Zeta, the most powerful Dragoon weapon in A Realm Reborn.

Longinus' and Longinus Zeta's secondary stats are determined by what the player chose to imbue in their Gae Bolg Novus, and can be redone by acquiring and imbuing a new Sphere Scroll: Gae Bolg from Hubairtin in Central Thanalan and presenting it to Jalzahn Daemir in the North Shroud.

Though not an equippable weapon, the Lance of Longibunne is an Artefact. Many adventurers have lost their lives pursuing this spear, said to be capable of piercing solid stone. Legend holds it once slew a demon that had seized control of the mortal realm.

The Lance of Longinus is Nine's ultimate weapon. It provides 74 Attack Power. It can be obtained by defeating True Gilgamesh with Nine. In the PSP version it can also be obtained by exchanging for 15 tickets on the Square Enix Members site. While the weapon does not change the model of Nine's weapon, it is depicted on Gilgamesh as a black mast spear with a red edged flanged mace like head with prominently protruding blades.

A spoon of foreign origin. Differences of culinary culture are evident in its shape.

A lance infused with the power of the sky gods. For Lilties only.

Lance of Longinus is the second strongest spear in terms of attack, and can only be used by Lilties. It provides 140 attack at level 1 and 175 attack at level 30, gives +30 to Stun, and has one empty slot. It can be obtained from Neo Larkeicus (Hard or Very Hard mode), and then created for 1,880 gil by using Abyssian x3, Adamantite x3, and Dragon Horn x2. When turned into a jewel, a level 3-9 Lance of Longinus makes a Spirit Moonstone, level 10-19 makes an Extreme Mania, and level 20-30 makes a Gigas Eye.

The Longinus is a level 93 weapon exclusive to Firion that increases Attack by 67, and decreases Defense by 2.

A spear from the distant world of Spira. This lance is one of the legendary Celestial Weapons found in Spira whose potential can be enhanced. It can be obtained in the planes where thunder never ceases to roar, and is said to have once been wielded by a young Ronso with a broken horn.

A legendary spear that wards off evil. Many a terrifying monster has been slain at the hands of heroes wielding this weapon. Perhaps fearing the power of the longinus, rumors have spread of the mighty undead Lich secreting the weapon away. Foolhardy adventurers who seek this legendary weapon come in endless succession to challenge Lich itself.

Spirit Lance (FFX) is a spear that provides 177 ATK and increases Jump damage by 50%. It is obtained as the Super Trust Master from Kimahri.

Longinus (FFBE) is a spear that provides 190 ATK and 75% bonus physical and magic damage against Fairies. It can be obtained by clearing the trial "Scorn of the Lich".

The Spirit Lance appears as a 2-handed spear within the Forsaken Dungeon. It provides 81 Weapon Atk, 10 Durability, +5 Magic Atk, -4 Speed, and -4 Consumption Rate. Only Masuda Koji can equip this weapon.

Longinus is a spear that can be equipped by Santiago.

The fateful spear that a soldier is said to have used in the execution of a legendary prophet who was the savior of his people but was eventually captured by the land's occupiers who feared his influence. It is said to be a holy relic because it was bathed in his blood. It deals special damage against aquatic monsters.

In Bravely Default, Longinus is a spear that provides 39 P.ATK, 90 Aim, 2 Critical, and deals +50% damage to aquatic enemies. It can be found in the Witherwood (blue chest) and Dimension's Hasp.

In Bravely Second: End Layer, Longinus is a spear that provides 40 P.ATK, 90 Aim, deals 50% more damage to insects and aquatic foes. It can be found in the Eternian Central Command (blue chest). 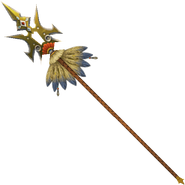 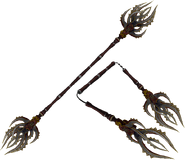 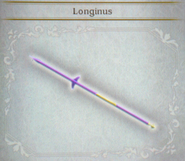 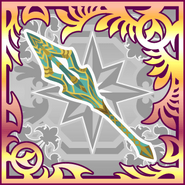 [view · edit · purge]Longinus is the name given in medieval and some modern Christian traditions to the Roman soldier who pierced Jesus in his side with a lance, the "Holy Lance" while he was on the Cross.