Longbow (ロングボウ, Rongubō?) is a recurring bow in the series. It is usually a low to mid-ranked bow with no special properties.

A large bow crafted for battle.

The Longbow is a low-ranked weapon, being the second weakest bow, and provides 5 Attack and 40% Accuracy. It can be found in Bafsk, and bought for 250 gil in Bafsk and Salamand.

While not appearing physically or having any statistics inside the data, there is a text string of Longbow suggesting that at one point during development that this weapon was planned to appear in the 3D remake as a bow.

Longbows have higher damage and delay than Shortbows, but can be equipped by fewer jobs (some only for use by Rangers). The earliest version is at level 5.

The Longbow is a low-ranked bow that requires 30 LP and the Bows 2 License to use. It provides 33 Attack and is bought for 3,000 gil in Rabanastre. Bows are among the slowest weapons with 2.96s charge, and 1.4s action time.

In the Zodiac versions, it now provides 48 Attack, 36 CT 5% critical rate, and requires the Bows 3 license for 35 LP. It can be bought in Rabanastre, Nam-Yensa Sandsea, Tomb of Raithwall, Jahara, and Balfonheim Port for 4,600 gil, or from the bazaar for 2,800 gil after selling Crooked Fang x2, and Fire Stone x4. It can be equipped by the Archer class.

The most common type of bow. It has a long range and is quite durable.

The Longbow is the weakest bow, providing a meager 4 Attack. It can be bought for 800 gil. It can also be found as a rare treasure with the Treasure Hunter ability at the Brigands' Den.

The Longbow is the weakest bow, giving 19 Attack and teaching the Boost ability for 100 AP. It can be bought from Muscadet for 240 gil and any other town for 270 gil.

Longbow is the second weakest bow, only being slightly stronger than the Shortbow. It provides 19 Attack and 5 Range, and teaches Focus to Archers for 100 AP. It can be bought for 120 gil in the shop after creating it in the Bazaar after using a Molting, Sturdy Vine, and Mape Wood.

Longbow is Trey's initial weapon and gives +3 to his Strength. It can also be found as a random treasure in Bethnel Caverns. It sells for 80 gil.

A bow longer than most. Used by the yeomen of a distant royal kingdom.

LongBow can be bought in Hidden Town for 8,000 GP. It has 50 uses and an attack power of 120, the damage formula for LongBow is base on Agility.

Long has a bow icon before its name. It has an attack power of 7 and it can be bought for 100 G at at Dharm during the Present.

The Longbow is a bow class weapon and its leveling rate is normal. At its base level, its Attack is 140 and its Defense is 180. Its maximum level is 20, and its cost is 2.

A bow as large as a full-grown adult that can shoot across a great distance. It has more firepower than the short bow, and its ability to pierce enemies in the air is also extraordinary. The best location to shoot this bow is either from far away, or from a point of high altitude, as its great size makes it difficult to maneuver in close combat. Therefore it is essential that the necessary precautions are taken before putting this weapon to use.

Long Bow is a Bow obtained by buying it for 520 gil at Village of Kol and Grandport, by crafting it using 104 gil, x5 Wind Crysts, x5 Raptor Leathers, and x3 Iron Ores, and by finding it at Zadehl Westersand. It provides 24 ATK, +50% physical damage against Birds, 70% accuracy, has a damage range of 125-175%, and requires both hands to wield. 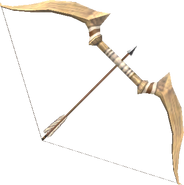 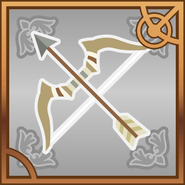 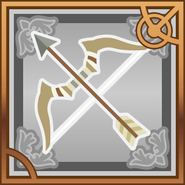 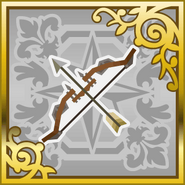 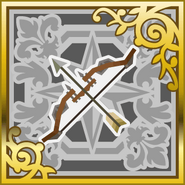 [view · edit · purge]A longbow is a bow roughly equal to the height of the person who uses it allowing its user a long draw. A longbow is not significantly recurved. Longbows have been made from many different woods by many cultures; in Europe they date from the Paleolithic. Longbows have been used for hunting and warfare, by many cultures around the world, a famous example being the English longbow, during the Middle Ages.