Long range (遠距離攻撃, Enkyori Kōgeki?) is a type of attack classification. It refers to row, as normally units in the back row deliver decreased damage. However, the Long Range support ability lets one inflict full damage regardless of their row, or the target's row. Certain games also have enemies that are out of reach and can only be hit with ranged attacks.

Magic and Throw are long range.

Most games have weapons that are long range, usually boomerangs, bows, whips, and guns. However, different games have had other long range weapons, and some have the Long Range ability as a separate power.

Bows are long range, and thus are the only weapons party members can successfully attack with from the back row. Some enemies have bow attacks, but these are treated as magical abilities rather than physical attacks.

Bows, whips, harps and boomerangs are ranged weapons. They are used by Cecil, Rydia, Edward, Rosa, Palom, Porom, Cid, and Edge. In the 3D release, the augment Reach can be acquired by doing subquests in the Developer's Office. Bows are equipped exclusively by Rosa in the 3D version.

Some bows, shurikens, and a single axe and whip makes a return. They are ranged weapons and can be equipped by multiple characters.

Bows, whips, and boomerangs are long range weapons. Various job classes, including the Thief, Ninja, Ranger, and Beastmaster, can equip them. The ability Long Reach is exclusive to the GBA and mobile/Steam versions, and is the Level 3 ability of the Gladiator class. It requires 150 ABP to master.

Barret, Red XIII, Yuffie, and Vincent can equip various ranged weapons, including guns, throwing stars, and boomerangs. The Long Range Independent Materia found at the Mythril Mine also makes any physical attack long range. Certain enemies, such as Bottomswell and Ultimate Weapon, are out of reach and must be hit with long range attacks. Limit Breaks are ranged attacks.

Quistis, Rinoa, Irvine, and Laguna wield typical long range weapons, with Rinoa's Blaster Edge making its debut. However, there are no situations in-game that provide advantages for long range weapons or prevent the use of attacking at short range, as the game has no row system or out of reach enemies.

The Protect Ring and Thief Hat teach the Long Reach support ability, which can be learned by Zidane, Steiner, Freya, and Amarant. Mastering the Long Reach ability requires 170 AP for Zidane, 200 AP for Steiner, and 210 AP for Freya and Amarant. Equipping it requires the use of 16 Magic Stones. It makes the equipping character's physical attacks deal the same damage from back row as in the front row.

Rackets are long range weapons and can be equipped by Dagger and Eiko. Amarant can throw weapons for ranged damage. Ozma is initially an out of reach opponent, but if the player completes the friendly monsters sidequest, it becomes a close-range opponent.

Wakka is the only physical long range character. The game has no rows, but he can hit far-away enemies the others can't. With a boss-fight exception against Evrae and Sin at max range, all Overdrives except Swordplay, Bushido, and the non-attacking portions of Mix, are ranged hits. The long range Ronso Rages are Seed Cannon, Fire Breath, and Doom.

Bows, crossbows, guns, and hand-bombs are ranged weapons. Large aerial enemies with the Flying tag, like divers and wyverns, avoid attacks from melee weapons, while the smaller bats do not. In the Zodiac versions, spears, poles, staves, and rods can hit Flying enemies as well, but still function as melee weapons.

Balthier equips guns, Fran equips bows, and Ashe equips hand-bombs, all of which are long range weapons. There is also a specific subcategory of ranged Espers.

Sazh, Vanille, and Hope wield long range weapons. When fighting the Havoc Skytank, which is out of reach for melee attacks, Lightning uses her gunblade as a gun to attack from a distance.

There is little differentiation between long range and short range attack damage, but the weapon type determines characters' position in combat; characters with long range weapons tend to stay in the same position throughout the fight, while characters with short range weapons have to move to meet their target. Thus, clever use of certain characters and paradigms can spread the party out, lowering the effectiveness of enemies' area-of-effect attacks. However, Sazh's shots are more prone to miss if he's too far away, and Vanille will move closer to her target if she's out of range.

Both Serah and Noel wield long range weapons; Serah's bowsword becomes a bow or sword depending on range, while Noel wields a pair of swords that can combine into a spear that also functions as a javelin.

Bards, Machinists, and Dancers all use long range weapons.

In the 1.0 version, Conjurers and Thaumaturges could do physical long ranged attacks with their staves and scepters, but this ability has been removed in later versions.

Guns are ranged weapons used by Noctis and Prompto, while the Cerberus is a unique firearm usable by Noctis that can enter a first-person shooting mode. Noctis also has ranged royal arms: the Star of the Rogue and the Bow of the Clever. When controlled by the AI, Ignis may launch his weaponry at a foe, and Gladiolus will occasionally throw his sword, which may also be performed by character-swapping to him. Character-swapping to Prompto lets the player fight in an entirely ranged style.

Ranged weapons deal less damage the further away the target is from the attacker, making guns not particularly strong, though they are the only weapon type the player can use while in cover.

Noctis's warp-strike is a powerful attack that lets him quickly strike a targeted enemy from a distance—the further away from he strikes, the more damage he deals. He can also throw his weapon forwards to deal damage without targeting. When using daggers or shields, Noctis can throw his weapons forward while attacking by tilting back, similar to Gladiolus.

As combat is action-based, range is a property of position in 3D space, rather than row. In many cases, verticality is an important consideration, as having Noctis warp to higher places allows him to recover HP and MP at an accelerated rate while avoiding damage from enemies, and allows him to attack from above.

Bows can be wielded by human and viera Archers, greatbows can be used by human Hunters as well as viera Assassins and Snipers, and guns can be equipped by moogle Gunners.

Can attack from the back row without a loss in damage.

All bows, thrown weapons, the Javelin, and Rocket Punch ignores row. The ability called Backliner, it is a Dark Knight ability available at job level 7 and costs 190 AP to learn. It allows to deal full damage with weapons which usually need the user to be in the front row to deal full damage, such as swords.

Long range attacks inflict full damage from the back row, and can hit certain enemies that cannot be hit with melee physical attacks. If a character is equipped with a ranged weapon—a bow, gun, throwing weapon, whip, or instrument—then any physical attack they use will be long range. Certain abilities and Soul Breaks are ranged regardless of the equipped weapon, and jump attacks are always ranged.

Long Reach is a materia obtained during the Final Fantasy IX event, Iifa Tree. It provides 10% physical evasion and immunity to Petrify. 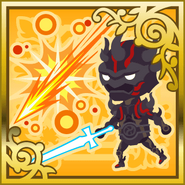 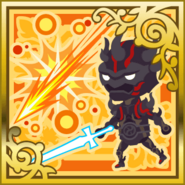