Long Gui is an enemy in Final Fantasy XIII. It is considered a superboss along with Vercingetorix. Long Gui will replace all of the Adamantortoise and 1/2 of the Adamantoise population on Gran Pulse after completing missions 56–62 in the Cie'th Stone circle.

Long Gui looks like an Adamantoise, but has a slightly bluish/teal skin color, and its tusks are dark, rusty brown. It has 16,200,000 HP, more than the other superboss, Vercingetorix. Its two forelegs are additional targets, each boasting 1,080,000 HP. Unlike Adamantoise, Long Gui is immune to Vanille's Instant Death. However, the Death spell can deal near 999,999 damage when it is in stagger, provided the player switch to a COM/COM/COM paradigm before Death hits.

It would be good for the group to have maxed out Crystarium and equipment (or at least the main trees and tier 2 or 3 equipment). Defeating Long Gui earns the Adamant Will achievement/trophy.

Long Gui is neutral to elements and is vulnerable to Imperil. It resists both physical and magical damage, meaning it only takes 10% of damage from normal attacks.

Long Gui always gets first turn in the battle. Its Earth Shaker deals Earth-elemental shockwave damage to all grounded targets, but misses any character in midair when the attack hits. If a character is near the leg Long Gui uses to stomp, they may take damage from the hit as well. Long Gui can stomp even with a "defeated" leg as long as it has one "undefeated" leg at the given time.

Roar has a dispelling effect as well as dealing damage and inflicting Daze. The Daze has 70% base chance to hit and lasts 10 seconds if affected. Other attacks it has are Quake, which is similar to the Earth Shaker attack, except the damage is magical rather than physical, and Long Gui won't stomp with its foot. Ultima is Long Gui's strongest attack and deals non-elemental magic damage to all targets. When Long Gui is in low health, it can cast Roar and Ultima back-to-back giving the party no time to heal in-between. This can be useful, as Ultima will nullify the Daze effect from Roar.

When the Long Gui collapses, it may also deal Earth damage to anyone who is too close. Long Gui collapses if an Eidolon is summoned against it, or its legs are defeated. When Long Gui has collapsed, it will not attack, and becomes vulnerable to multiple status ailments. The only ailment Long Gui is susceptible to when not in its collapsed state is Slow. The collapsed state lasts 90 seconds, and if the player summons an Eidolon during the time Long Gui is collapsed, the time spent with the Eidolon is not deducted from the 90 second collapse time.

Long Gui will cast Doom upon the leader should the battle last longer than 20 minutes.

The recommended party is Fang, Sazh and Vanille, though the battle can be won with any party. Either Sazh or Vanille should be the party leader because of their specific skills. Sazh is also a good healer as he mostly casts Curasa, and Fang and Vanille are the only ones to learn the upgraded versions of Synergist spells.

As Long Gui always attacks right away, the party should come in with the SEN/SEN/SEN paradigm, or be ready to shift immediately.

If the player can see they will not survive Ultima when Long Gui starts casting it, they can quickly summon an Eidolon, making them temporarily immune to damage. If timed correctly, the player will survive Ultima with no damage sustained and the Eidolon will disable the Long Gui's legs causing it to collapse. Because summoning an Eidolon will always topple the Long Gui, even a low level party can defeat it if they have enough Elixirs to replenish their TP.

The party should disable the legs and stagger Long Gui as quickly as possible to 999.9%. If using Vanille, the player should use SAB/COM/COM and cast Death, but switch to COM/COM/COM before it hits to deal more damage. It is best to configure the paradigms so SAB/COM/COM and COM/COM/COM are next to each other on the deck. Death bypasses Long Gui's resistance to magical damage, and its power can be boosted by casting Faith/Faithra, by using a rod with high Magic stat, and by inflicting Long Gui with Imperil and buffing Vanille with an elemental buff. The Long Gui is immune to the death effect, but with an appropriately equipped team, Vanille will be doing 500,000+ damage per casting.

If controlling Sazh, the player should constantly use Blitz when the Long Gui is staggered; Sazh will deal 599,994 damage (99,999 x6) per Blitz. Sazh and Vanille both deal more damage per second than Fang, but Fang has high strength and will help kill the Long Gui faster than any character other than Sazh or Vanille. It is possible to double the damage from Death, Blitz and Fang's attacks, by inflicting Long Gui with Imperil and buffing the party with Enfire, but Long Gui is only vulnerable to statuses when in its collapsed state.

If using Vanille's Death to deal most of the damage, a fast strategy is as follows. The player should have at least three TP, and when the battle takes off, quickly go to the "Summon" option, but not actually summon until allies are receiving the starting damage from Long Gui's Ultima. This way, Vanille will not have to be revived, which would dismiss her summon. When Hecatoncheir appears and Long Gui's legs are disabled, Vanille should start off with Poison, which may take up to one or two full sets to hit. Poison is a useful status because it removes a constant percentage of max health, meaning it is more powerful against enemies with high HP. Next, Vanille must debuff Long Gui with Imperil, and with single spells of Deprotect and Deshell, then shift to Synergist and cast Faithra and Bravera on herself.

Hecatoncheir should still have some time left, so one may wish to switch to a Ravager, building up the chain gauge, waiting for the summon's life bar and Gestalt Gauge to empty.

When Hecatoncheir leaves, the party should switch to SYN/SYN/SAB and Vanille should cast Bravera or Faithra on all allies, while Sazh casts Haste and Enfire to everybody, and Fang should finish debuffing Long Gui with Curse and Slow (to keep Long Gui's stagger gauge in place). After Long Gui is debuffed and the party is buffed, the player can raise the stagger gauge to 999.9% and use Death constantly.

Strategies for other party settings[]

If not using Vanille or Sazh, Fang is a good party leader due to her Highwind being a quick way to take out the forelegs, and because she knows the upgraded Synergist spells Bravera and Faithra. Highwind deals full damage ignoring the target's debuffs, such as Deprotect and elemental weaknesses/resistances, such as Imperil coupled with Enfire. Therefore, it is unnecessary to debuff the legs with Saboteurs. Having Bravery boosts Fang's damage by 40%, and having Bravera boosts it by 80%.

The party should start the battle with SEN/SEN/SEN to survive the initial Ultima, then switch to SYN/SYN/SYN and manually cast Bravera to Fang while the allies cast other useful buffs like Haste, Protect and Shell. The party should change to COM/MED/MED in case they took any damage, then shift to RAV/RAV/RAV to stagger a leg. It is recommended to raise the stagger to at least 700% to kill the leg in one shot with Highwind. The party can shift to COM/MED/MED when using Highwind to heal up. If fast, the party may not need any additional healing.

Once both forelegs are down Long Gui will collapse. This is a good time to shift to a paradigm where Fang is a Synergist to manually cast Bravera and Faithra on all allies so that the buffs won't run out, then start attacking Long Gui with Saboteurs and Ravagers to inflict all possible debuffs. At this stage Long Gui is vulnerable to debuffs and the party can deal double damage if the Saboteurs cast Imperil on Long Gui and the Synergist casts Enfire to the team. Long Gui has over 16 million in HP, so casting Poison while its legs are disabled is effective when dealing damage while in the COM/COM/COM paradigm. The party should use RAV/RAV/RAV to push the stagger gauge up to maximum, then switch to COM/COM/COM to deal massive damage. Each stagger phase should remove slightly more than half of the Long Gui's maximum health.

The party should always switch to SEN/SEN/SEN when the Long Gui attacks. Ultima and Quake can instantly kill the party without the protection bonus from the Sentinel. The Sentinel's passive Reprieve ability, learnable by everyone but Sazh, may be necessary to survive.

The only debuff Long Gui is susceptible to when not toppled is Slow; Slow is useful as the attacks do seem to get more frequent later in the fight. It can be worth casting Slow early to Long Gui itself, rather than the legs.

When not using Sazh, Fang or Vanille, Hope can be a good party leader as he is the only character capable of taking out both legs at once. The party should start with the Tortoise paradigm to survive Ultima, then switch to Variety or Evened Odds and spam Curaja and/or Curasa to heal until the party is in good condition. The party should switch to Aggression or Relentless Assault to stagger them and, after both legs are staggered, the party should switch to Aggression and use Last Resort and shift to Cerberus before the damage numbers appear to boost its power to take out the Long Gui's legs.

Once Long Gui falls, the party should reapply any expired buffs and start debuffing the oretoise with Guerilla, then shift paradigm to stagger it and switch to Guerilla to apply Faithra. The party needs to repeatedly switch between Aggression and Cerberus while spamming Last Resort, and defeat it at the end of its stagger.

Long Gui appears as an enemy in Pictlogica Final Fantasy. 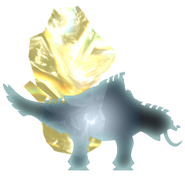