A young member of the Returners. Saving Terra started him down the path to overthrow the Empire, and ultimately Kefka himself.

Locke is a playable character in Final Fantasy Record Keeper who could initially be recruited during the Challenge Event Legendary Plunder as the First Time Reward for completing the event's Phoenix Cave stage on the Classic difficulty track. His Hero Record was rereleased in the Challenge Event Assassin in Black.

Locke is an Adventurer, whose combat role is Physical Speed.

He is very well-rounded and durable for a Speed attacker, Locke's strengths lie in his Thief skills and his ability to manipulate the flow of battle from either rank. Other than this, his prominent association with Phoenix gives him an affinity with Fire and/or Holy in his more advanced Soul Breaks, which serves him well versus most undeads, aquatics, and ice creatures. 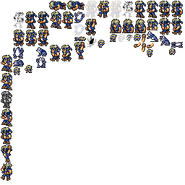