A warrior from the sky continent of Lemurés. He exhibits a curiosity not commonly found among the aegyl, for which he is regarded as something as a curiosity himself.

Llyud is a playable character in Final Fantasy XII: Revenant Wings. A member of the reclusive aegyl race that lives on the sky continent of Lemurés, he is rejected by his kin for siding with outsiders. Filo gains feelings for him after the party is stranded on Tswarra, Isle of the Lost.

Llyud's most prominent feature is his large feathered wings, which are the same shade of red as his shoulder-length hair. Llyud wears a gold-colored collar and a large golden beaded necklace with blue stones. He wears no shirt, wears brown gloves and dark blue trousers with a brown belt, and brown leather shoes.

Llyud at first appears unresponsive and cold due to having had his anima stolen. In this state, he is passive toward the world events, something that can aggravate his comrades before they find the reason behind his unsympathetic nature. After Llyud begins to regain his lost emotions, his true personality begins to surface.

He is still reserved, but shows concern for his new friends and the fate of the world. This is an aspect that also troubles him; as Llyud begins to bond with his comrades he also begins to fear losing them and grieves over their losses. Llyud is curious and an adventurer at heart; it is partly this curious nature which makes him join Vaan, Penelo, Kytes, and Filo in the first place.

We aegyl are not complete. We lack the heart that makes you humes whole. 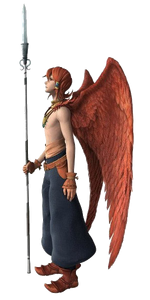 Several years ago Llyud was constantly curious, traveling from island to island investigating different things, something that often got him in trouble. When the party meets him Llyud is like the rest of his kind: withdrawn, emotionless, and rarely interacting with anyone outside his race. Llyud travels with another aegyl called Ansei to protect Lemurés from Ivalician sky pirates. Llyud and Ansei are attacked by monsters, but are saved by Vaan's party. He joins them to help Ansei and stays with them for the duration of their quest.

Llyud initially does not understand the emotional behavior of Vaan and his friends due to having lost his anima, but stays with them to stop the Judge of Wings, a mysterious villain who wants to lay waste to Ivalice, and protect his homeland. After the party's airship crashes at the Isle of the Lost, Vaan demands Llyud to show some emotions for once. The party meets a Dalmascan soldier named Velis who befriends Penelo, but when the Judge of Wings appears, she turns Velis into a Yarhi and orders him to fight the party. Llyud coldly kills Velis and does not understand why Penelo is crying. When Llyud and the rest are sent to the Isle of Illusion, the Yarhi's homeland, Llyud begins to feel emotion as a result of being in a place where anima takes form.

His time with Vaan and company allows Llyud to develop relationships and show moments of genuine emotion. Llyud and his people had lacked soul until Vaan and his friends return it by defeating Velis and ultimately, the aegyl god Feolthanos. Along the way fellow aegyl mock Llyud on how he makes friends with humes. When the sky continent crumbles after the auraliths have been destroyed and the anima they had inhibited has been released, the rest of the party flies away on Balthier's Strahl back to Ivalice. Llyud does not follow, but departs to look for a new homeland for the aegyl.

Llyud is a group leader in command of an Esper Troupe of his own. He is a flying unit, like Filo, and is the first new player character to join Vaan's sky pirate group after they come to Lemurés. Llyud's job is Dragoon, dealing with support abilities as well as attacks. Being an aerial unit, he can cross obstacles and gaps on the battlefields. His Quickening, Fanfare, boosts all currently summoned ally Yarhi.

Llyud mans the material shop aboard the Galbana, and contributes to the party's Logbook. 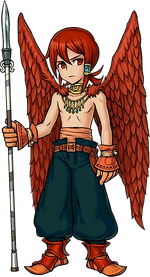 Llyud appears as a playable character.