Fire
List of Lizard Enemies
Lizard is a genus of enemies in Final Fantasy XI.

Lizards are bipedal reptiles found throughout the Quon continent, usually in warm areas. They are somewhat valuable to the economy of Vana'diel: their hides can be made into a decent lightweight armor, their tails are sometimes used by alchemists, and their eggs can be used by cooks to create various dishes.

Lizards are docile creatures, but when attacked will defend themselves, using their thick skulls and strong tails as weapons. Lizards will sometimes defend themselves with fluids produced by glands within their body: they can secrete a lubricant that can cause some blows to slide off their hides, spit a powerful venom to poison their enemies, and create balls of fluid that will burn (or freeze, in some cases) anyone nearby. Their eyes are also believed to possess some sort of magical quality: at times, staring directly into them can Petrify a victim. Finally, their high-pitched screams can cause disorientation and lightheadedness in those who hear it. 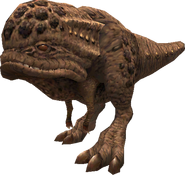 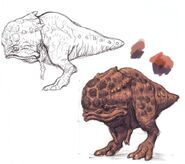 This section about an enemy in Pictlogica Final Fantasy is empty or needs to be expanded. You can help the Final Fantasy Wiki by expanding it.
Final Fantasy XI enemies
Community content is available under CC-BY-SA unless otherwise noted.
Advertisement