Attacks with Lash and Quake, so watch your status.

The Litwor Chicken, also known as Chickenlip, is an enemy in Final Fantasy VI.

Litwor Chickens are difficult to defeat and they attack in large groups. When left alone, or when Confused, they have a chance to cast Quake, which will decimate the party. If a character learned Float from Cait Sith and casts it, Quake will do nothing but hurt the caster and their allies. Otherwise, confusing the Litwor Chicken is not advised, and they should be taken out in a group. Sabin's Rising Phoenix, Edgar's Tools, Celes's Blizzard, or any other group attacks work well. 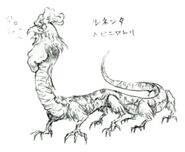 Concept art by Tetsuya Nomura.
Add a photo to this gallery

The artwork for the enemy reads ヘビニワトリ (hebiniwatori?), which are the Japanese words for snake (ヘビ, 蛇, hebi?) and chicken (ニワトリ, 鶏, niwatori?) concatenated together. Above it is the text ルネンタ (runenta?) which is the name of the Tunneller from Final Fantasy V, whose name is likely formed by reversing a transliteration of "tunnel".

Retrieved from "https://finalfantasy.fandom.com/wiki/Litwor_Chicken?oldid=3368576"
Community content is available under CC-BY-SA unless otherwise noted.