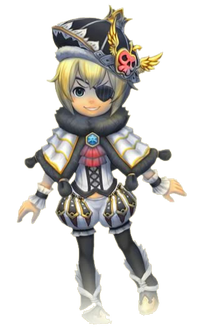 Little Pirate is one of the "monsters" available for Mira to summon in Final Fantasy Crystal Chronicles: My Life as a Darklord. Little Pirates become available for summoning once the player has purchased the "Darklord Elite Unit" from the Add-on content menu using Wii Points.

Little Pirates cost 55 NP to summon, and their attacks have an added Bio effect, that deals gradual damage to an enemy and weakens its attack power. However, Little Pirate's HP is extremely low, usually making his battlefield excursions brief. Little Pirate is a generic-type summon, meaning that he does not possesses weaknesses or resistances to any damage type, nor is any opponent weak or resistant to his damage.

The Little Pirate's appearance is based on that of King Leo in his "King's New Cloak" outfit from Final Fantasy Crystal Chronicles: My Life as a King.

Summons
Retrieved from "https://finalfantasy.fandom.com/wiki/Little_Pirate?oldid=3087511"
Community content is available under CC-BY-SA unless otherwise noted.