Train train, take me away, far away, to the future we will go.

A train (列車, Ressha?) is a connected series of vehicles that move along a railroad to transport freight or passengers between cities. Trains are a recurring mode of transportation in the Final Fantasy series, and have also appeared as bosses and dungeons.

This is the first appearance of a train and railroads. The ghostly Phantom Train can be ridden and is explained as a train that carries the souls of the dead to the afterlife. Although Cyan specifically states that Doma had a rail system, no trains besides the Phantom Train can be seen or ridden, although Clyde and his friend Baram called themselves "The Great Train Robbers of the Century."

The train has a short appearance in the opening, where Cloud and the AVALANCHE members use trains to reach their target mako reactors and again when returning to the Midgar Slums. The trains ride up and above the plate separating the sections of Midgar, specifically the slums from the upper-class. There also exist various security checkpoints along the routes to automatically scan the ID cards of the passengers. An invalid ID results in the train being locked down car by car.

Mt. Corel is filled with an extensive abandoned rail network. It is used in Disc 2 by Shinra to transport a Huge Materia. Cloud's party, temporarily led by Cid Highwind, attack the train to save the Materia. The train goes out of control and depending upon the player's actions, it can be stopped, or it will crash into North Corel.

Zack's first training mission takes place over a train, mirroring the start of Final Fantasy VII, but this time the train is a hologram for training purposes. The real version of the train can be seen is at the Sector 1 Station, and it links Sector 5 Slums with the Sector 8.

The train is called the MK93 II, but a boy at the platform says that an even newer model, the MK100-90, is in the works. Both the digital train and the real life one are the same as the one used at the start of the original, and carry the same passenger carriages as well.

Squall and his party can take the train paying the amount of 3000 gil. Trains run all over Galbadia and connect Balamb to Galbadia via an underwater tunnel. An oceanic bridge through Fishermans Horizon also connects Galbadia to Esthar. The private train of President Deling is also hijacked during the game using a complex plan involving the interception and changing of his private car with a fake.

Due to the unavailability of chocobos until later in the game, the train network is generally the easiest way to travel across the Galbadia continent, and traveling to and from Balamb until either Garden or Ragnarok are obtained. 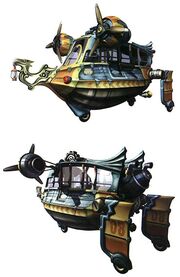 A monorail-like transport, known as the Air Cab, is used to travel between the four districts in the Regency of Lindblum: The Industrial District, Business District, Theater District, and Lindblum Grand Castle. Like the newly developed Hilda Garde series of airships, they operate on steam power and are not reliant on Mist as fuel. Air Cabs operate around the clock, demonstrating the technological prowess of Lindblum's engineers. They are used during the Festival of the Hunt, where Zidane and the other participants used them to hunt for the monsters set loose in the city.

When the kingdom of Alexandria besieges the Regency and temporarily takes control of it, the Air Cabs are prevented from operating. After the party returns from the Outer Continent, Alexandrian forces have left Lindblum and the Air Cabs are once again in commission.

Additionally, the Fossil Roo tunnels contain a vast network of roots connecting Gaia (Final Fantasy IX)'s continents. These act as an organic rail network, with various characters riding and directing the Gargant inhabitants as they travel along the monorail-like roots.

Trains are not used as the main land transport in Ivalice, having been abandoned due to the advent of airships and the infestation of mimic-germinites that eat away metal, forcing denizens to use chocobos as their main land transport. Abandoned railway tracks can still be found in the Barheim Passage and at the Lhusu Mines, where players can use the minecart to travel around the passageways.

Lightning and Sazh Katzroy board one of many trains from Bodhum station to be purged; Lightning had told Sazh to catch the next train if he wants "quiet". During the ride Lightning catches a PSICOM soldier off-guard and attacks him, causing him to drop a device that keeps the purgees imprisoned. Lightning works her way through the train, taking out more PSICOM soldiers.

Manasvin Warmech eventually stops and destroys the train. One train falls off its tracks, other trains move along and some in wrecks with the victims using PSICOM's weapons against them. Another Purge train is seen in Lake Bresha in Chapter 3. Whether it is the same one Lightning and Sazh were in is unknown, but a broken down version of the Manasvin Warmech appears near it as a boss.

Artwork of the Purge train.

Monorails are one of options used to travel between the four continents that make up Nova Chrysalia.

During the ending, Lightning steps off a train in a countryside on a peaceful journey to reunite with one of her friends. It appears the train and as well as the station are modeled after a location in France. The locomotive is a BB 67300, owned by the French rail company SNCF (the station totem is also used in every French station). The logo on the first car, "SCFF", imitates an old logo of the SNCF.

Train tracks can be found in various locations in Thanalan, most prominently Central Thanalan. Ul'dah developed these tracks using stolen Garlean technology and use them for their mining industry. Another prominent track connects Castrum Meridianum in Northern Thanalan with Castrum Centri in Mor Dhona. A Garlean train called the Phantom Train runs between the two, a homage to the Phantom Train from Final Fantasy VI, while the actual Final Fantasy VI Phantom Train later appears as a boss in the Sigmascape V1.0 raid.

Prince Noctis's party travels through the imperial continent on train. The first portion of the story is on the open world, but the latter chapters are linear; as the player takes the train and the story's structure changes. The player can still return to the open world portion from lodgings.

In Cartanica and Tenebrae, stationary trains have been converted into hotels and restaurants.

In Omen, a segment of the trailer takes place inside a subway car, but though Insomnia appears to have a subway system, no underground trains are ever seen in the game or the movie.

Trains are a form of transportation. Layle frequently uses them to quickly travel from one area to another that would otherwise take lengthy, roundabout treks to reach on foot. While on the trains Layle has a limited amount of time to talk to passengers and buy supplies, which vary from train to train.

A part of the game has Layle hiding from Lilty guards on a train in a stealth-style minigame. The train can be seen running from one area to another in the Harvest Plains area, although it can't be boarded there.

Ai, Yu, and Lisa use the Interdimensional Train to travel from one area of Wonderland to the next throughout the original anime series. The train was built by Cid, and like all his other inventions, he gave it a woman's name, Elizabete.

This section in World of Final Fantasy is empty or needs to be expanded. You can help the Final Fantasy Wiki by expanding it.
Transportation
Русский
Community content is available under CC-BY-SA unless otherwise noted.
Advertisement