Cloud: I couldn't finish 'em. Looks like this's gonna get complicated.
The following tables are incomplete and require the Missing formations for special battles entries to be filled. If you wish, please examine the table and add anything missing. Remove this notice upon completion.

Home to Cardinal Delacroix, liege lord of Lionel, this castle once belonged to the Holy Ydoran Empire.

Lionel Castle (ライオネル城, Raioneru-jo?) is a location from Final Fantasy Tactics. Located in Southern Ivalice, it is the stronghold of Cardinal Delacroix of the corrupt Church of Glabados. It is also the site of Saint Ajora Glabados's capture and of Ramza Beoulve's battle with Cúchulainn.

Ramza Beoulve arrives at Lionel Castle with Princess Ovelia, Agrias Oaks, and Mustadio Bunansa to seek his assistance. Delacroix pretends to offer aid and agrees to shelter Ovelia, while Ramza and Mustadio go to the Clockwork City of Goug to search for Mustadio's father. They are unaware that Delacroix is really the Cúchulainn, the Impure of the Lucavi demons. He has Ovelia captured, but Agrias escapes. Meanwhile, Delacroix's hired mercenary Ludovich Baert, acquires a fake of the Taurus Stone, incurring Delacroix's anger. After assigning Goffard Gaffgarion to get rid of Ramza, Delacroix kills Baert.

Ramza attempts to rescue Ovelia from Lionel Castle, unaware that she has already been taken away by Delita Heiral. At the gate, he is attacked by Gaffgarion but defeats and kills him. He makes his way inside to confront the Cardinal, who transforms into Cúchulainn and attacks Ramza. Ramza wins the ensuing battle, killing the demon and landing Ramza an accusation of heresy by the Church of Glabados.

This is the first multi-battle zone, so the player should save a separate file. Ramza will start the battle on the other side of a gate from the rest of the party, who will be forced to take on the Knights and Summoner whilst Ramza fights with Gaffgarion. The best strategy is to put two stronger characters and two black chocobos in the second group. Two human characters should ride chocobos on their first turn and use them to fly to help Ramza on the second turn.

When the turn order gets to Ramza, units should stop riding the chocobos. When Gaffgarion is defeated, the player should recover all units, open the gate and have a more fair battle of 5 versus 6. It is also a good strategy to use the Knight skill Rend Weapon so Gaffgarion can't use his abilities forcing him fight with bare hands.

This battle occurs immediately after the previous battle. It is the first battle with a Lucavi, and the player will receive the Scorpio Stone after Cúchulainn's defeat. Cúchulainn has several attacks that can inflict various status ailments, so the player should hit him hard and fast.

Of important note, this battle is more difficult in the PSP version than in the PS version due to being restored to its original Japanese version and Cúchulainn's stats are much higher.

Note: It is possible to miss out on treasures here, as these are a one-time battle.

Inside of Lionel Castle[]

The castle's office, as shown in cutscenes.

The battlefield at the gate. 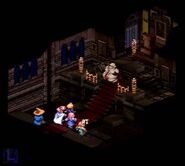 The oratory inside the castle. 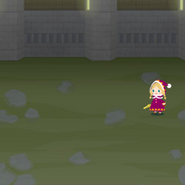