The realm of the gods

The traits Lindzei represents are seen throughout the Fabula Nova Crystallis series. Lindzei's aspects hold an affinity to the heavens and the ethereal/celestial world, though while being tasked to protect Bhunivelze and the universe, Lindzei has its own measures to find Etro's gate. While not a creator deity like Pulse, Lindzei invokes and encourages creativity and innovation through the minds of humans, shown through the technologically advanced civilizations ruled over by the deity, the Militesi Empire and the floating continent of Cocoon, although Lindzei is rarely acknowledged for them. Lindzei can be seen closer to the unseen realm (the realm of the dead), as the means used to find Etro's gate involve human sacrifice, using both humans and the deity's fal'Cie as tools. Thus, non-followers view Lindzei as an illusive devil and trickster.

Analects – Lindzei's Nest
And lo, the viper Lindzei bore fangs into the pristine soil of our Gran Pulse; despoiled the land and from it crafted a cocoon both ghastly and unclean.
Lies spilled forth from the serpent's tongue: 'Within this shell lies paradise.' Men heard these lies and were seduced and led away.
O cursed are the fools who trust a snake and turn their backs upon the bounty of Pulse's hallowed land! For those who dwell in that cocoon are not Men, but slaves of the demon Lindzei.
Ye who honor Pulse: rise unto the heavens, and cast down the viper's nest!

Analects – Fell Lindzei
As our fal'Cie are the children of Hallowed Pulse, so are the fal'Cie who lurk within Cocoon the brood of Lindzei.
But all gods are not alike.
Lindzei is cunning and false; sovereign to snakes and fiends; an anathema to be abhorred.
Cocoon fal'Cie are of Fell Lindzei's line, yet that did not spare them. They were betrayed all the same; left orphans when their Succubus fled this earthly realm.

—A Call to Arms

Lindzei was created by the god Bhunivelze who had destroyed his mother, Mwynn, to become the sole ruler of the world. Mwynn was banished in the realm of the dead, but afterward Bhunivelze came to believe she had cursed the world to mean all things would one day die, including him. Bhunivelze wanted to destroy Mwynn in the realm of the dead and created three fal'Cie of his own: Pulse, Etro, and Lindzei. Even though the mythology calls the three "fal'Cie", people would come to know them as gods.

While Pulse was tasked with crafting the world and finding the door to the realm of the dead, Etro was given no powers at all due to her resemblance to Mwynn, leading to Lindzei's creation as a replacement. Lindzei was tasked with protecting Bhunivelze from all who might want to destroy him. Bhunivelze crystallized himself to sleep until his creations would find the entryway to the world of the dead, but before doing this he gave Lindzei a special task: to wake him once the time would come.

Lindzei and Pulse created many fal'Cie of their own; Pulse to expand the world, and Lindzei to protect it. As revealed in Final Fantasy XIII-2 Fragments After, Lindzei played a role in humanity's creation by using Etro's spilled blood after she sacrificed herself to attract their creator's attention. Lindzei came to be worshiped as mankind's protector while Etro became known as the Goddess of Death.

Lindzei is first mentioned in the Analects as the creator of Cocoon. The first Analect, "The Vanished Gods", alludes to how the "Maker" created fal'Cie from its own being and then humanity from the traces of what was Divine. This appears synonymous with Lindzei's status as the creator of both the Cocoon fal'Cie and the creation of humanity through Etro's blood. However, the term "Maker" seems to be used for both Pulse and Lindzei, as from the Pulse fal'Cie's perspective, their maker was the former.

As the Analects are written from the Gran Pulse citizens' perspective, Lindzei is portrayed with contempt, referred to as the "serpent", "viper", the "Succubus", the "demon", and "Fell Lindzei". According to the Analects, Lindzei created Cocoon from pieces of land taken from Gran Pulse's soil. Lindzei bore other fal'Cie within Cocoon and invited mankind to live there, calling it paradise. Those who remained on Gran Pulse believed Cocoon citizens were no more than Lindzei's slaves. The VIII. Analect records that Lindzei abandoned Cocoon and the fal'Cie, betraying them altogether and leaving them orphaned.

Final Fantasy XIII Ultimania Omega reveals that the statues in Orphan's Cradle's Narthex Throne are that of Lindzei, and Lindzei's symbol is the Cocoon l'Cie brand; the same brand of which is seen on Cocoon's fal'Cie. The statues appear feminine and the statue itself resembles Lindzei's brand. As detailed in Final Fantasy XIII Ultimania Omega, a feminine parody of Lindzei manifests in Orphan's first form out of a subconscious yet sinister vision by the assimilated Barthandelus.

Radiant and shining Lindzei! From distant depths come forth to me!

Lindzei is mentioned while viewing a mural depicting Etro's death. Lightning and Fang recall Lindzei's role in humanity's creation, and Fang explains that the people of Gran Pulse saw the deity as an untrustworthy trickster. Lindzei personally manifests during Lightning's battle with Bhunivelze in the realm of the gods, transforming into a half of a twin scythe for him to wield, and is apparently destroyed during the battle.

Lindzei is served by Gala, leader of the Rursan Army. The Rursus are summoned to slaughter every human whenever one of the four Crystal-Nations of Orience becomes a world power in an attempt to force open Etro's gate with a flood of souls. The event is known as Tempus Finis. While the l'Cie branded by the Crystals aligned with the deity Pulse brave the Pandæmonium to become Agito, Gala possesses his chosen servant to become his own l'Cie, the Rursan Arbiter.

The Rursan Arbiter, known to Oriencians as the "Judge", is presumed to be branded by the mysterious Rursan Crystal. The Judge places crucibles on the other Crystals' l'Cie's path to test them for the position of Agito: the soul that can open Etro's gate. If no one becomes Agito, and the flood of released souls from the Rursan slaughter fails to reveal the gate to the afterlife, Gala and Arecia Al-Rashia reset the world and begin the spiral anew, a sequence of events that repeats itself 600,104,971 times.

During the events of Final Fantasy Type-0, the 600,104,972nd cycle, Arecia Al-Rashia—the servant of Pulse—convinces Gala to call off his forces when the Akademeia students she picked to become Agito and open Etro's gate turn down the chance to become l'Cie. Class Zero then destroys the current l'Cie Arbiter, Cid Aulstyne, without the powers of a l'Cie. While Gala's fate is left unknown, Arecia removes the Crystals from Orience to end the spiral.

Though Lindzei is referred to as male in the English version of Lightning Returns: Final Fantasy XIII, the deity's gender in the original Japanese remains ambiguous. The original Japanese version of the mythology uses gender-neutral pronouns, and none of the other games use specific gender pronouns to refer to any of the deities except for Bhunivelze and Etro. The statues depicting Lindzei in Final Fantasy XIII are feminine, but may be based on the fal'Cie's image of a mother figure, and thus may not depict Lindzei's appearance accurately. Lindzei is referred to as a succubus in an Analect in the English version, which is a female demon.

Etro is the only deity in the Fabula Nova Crystallis mythos to be specified as a goddess, and is often referred to as "the" goddess, giving the impression she is the only female deity out of the three frequently-mentioned deities. However, this classification comes from those who worship her as a patron deity. Lindzei is represented by the Jack in the card games in Serendipity, a male symbol, but is depicted as gender ambiguous on the playing card. The face on Lindzei's half of Bhunivelze's scythe in Lightning Returns: Final Fantasy XIII has androgynous features. Although two of the three murals depicting the Fabula Nova Crystallis: Final Fantasy lore in the Temple Ruins appeared to show a masculine Lindzei, producer Yoshinori Kitase has called it Bhunivelze in an interview.[1] However, this is likely a mistake, as Bhunivelze is seen in the third mural with his depiction matching his actual appearance, whereas his supposed depiction in the first two murals is different and depict events that he was not present for.

As a background element[]

Though not mentioned by name, the shape of Lindzei's crest

appears in various parts of Cocoon and its fal'Cie. Orphan's true form features Barthandelus as a "paternal" figure and his own version of Lindzei as a "maternal" figure. The gate shown whenever the party is leaving or entering Cocoon seems to have been modeled after Lindzei. It may be another fal'Cie, as many of the Lindzei's fal'Cie take on a shape similar to Lindzei's crest. The mark of Lindzei is seen on some of the walls of The Palamecia and Eden; both Cocoon fal'Cie. Barthandelus and Menrva also sport the mark. Other Cocoon fal'Cie resemble the shape of Lindzei's crest: Carbuncle, Kujata, and the headgear of the fal'Cie servants seen within Eden

. The mark is also visible in Final Fantasy XIII-2 under Raspatil's charge sphere for Aleph Zero.

on Snow's Save the Queen weapon resembles the Lindzei figure in Orphan first form.

Lindzei appears on the playing cards in Serendipity in Final Fantasy XIII-2 (available in Sazh's Story: Heads or Tails?). Lindzei is sitting on a throne robed in purple and silver, and the text reads in Etro script: "Commanding from his throne on high. The Solemn Ruler," referring to his role as the creator of Cocoon. The playing cards are also used in Final Fantasy XV.

Lindzei's name appears on an advertisement in a concept art of Insomnia for Kingsglaive: Final Fantasy XV.

The crest of Lindzei, forming the symbol of the Sanctum and the brand for Sanctum l'Cie.

Concept art of a "Lindzei Crystal" that looks similar to Cocoon. 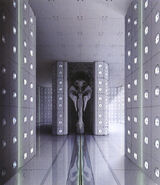 Artwork of Lindzei's statue in Narthex.

Statue of Lindzei seen in the Narthex.

Lindzei's statue in the Narthex. 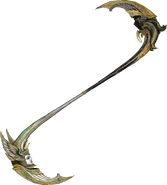 Lindzei depicted in a mural.

Lindzei depicted on a mural.

Lindzei may be derived from the common name Lindsey or Lindsay. [view · edit · purge]Lindsey is a unisex name of Old English origin associated with lakes and islands, or specifically islands of Linden trees.