Lindwyrm is a Rank V Mark in Final Fantasy XII. The hunt can be undertaken after the storyline events in Draklor Laboratory are complete.

Lindwyrm, World-Destroyer, Dragon of Ruin... thus was this fell Creature called in a kingdom now lost in Antiquity. According to noted tale-teller Fermon, the People of this forgotten Land challenged the Wyrm countless times, sealing it at last within a holy Shrine at the Cost of many lives. It was Fermon who posted a Bill for this Mark to ascertain the truth of his Theories.

Lindwyrm starts with Haste, Shell and Protect. It is susceptible to Blind, Silence and Slow. It has a high hit rating paired with its plethora of moves, such as Level 2 Sleep, Fireball, Stone Breath, Restore, and Greater Barrier. It also uses Fira, Thundara, and Blizzara.

Once Lindwyrm loses about 50% of its health, it will cast Greater Barrier and Restore. This recasts Protect and Shell, as well as brings its health back up to 75% of its maximum.

Once it is back as 50% of its health, Lindwyrm will begin using Level 4 Break regularly, instead of Level 2 Sleep. It will not use Greater Barrier again, but will use Restore once it reaches 25% health. Lindwyrm will not use it again after that.

Once the wyrm is near death, its natural defenses will rise. The wyrm is more likely to chain attacks, and its Stone Breath becomes more powerful.

If the party flees a bit away from the wyrm, it will not pursue, even if it is still in sight.

It is a good idea to bring accessories that immunize the party to Sleep or Stone.

Using the Nihopalaoa+Remedy strategy makes the battle easier. The party can cast Dispel on the Lindwyrm to take away its buffs.

When the wyrm is near death it is a good time to cast Bravery and/or Faith, if the buffs aren't in use already. This may also be a good spot to unleash a Quickening chain to finish Lindwyrm off. A good alternative in this final stage is to put the wyrm to Sleep with Nihopalaoa+Prince's Kiss (Alarm Clock) and bring the characters with highest magick power to blast it with Aeroga, since magicks do not wake up sleeping enemies; it has to be quick though, since the wyrm will be asleep for a short time.

If the party does not have a Nihopalaoa, using an Indigo Pendant in conjunction with Sleep or Sleepga and Aeroga trivializes the battle.

If the battle gets out of hand, the party can turn around and run a short distance away to heal and rebuff. The player can also reflect some of Lindwyrm's attacks.

The player will also receive a Rusted Scrap of Armor after the battle. 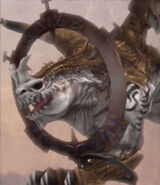 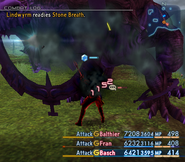 [view · edit · purge]Lindworm in British heraldry, is a technical term for a wingless bipedal dragon often with a venomous bite. In modern Scandinavian languages, the cognate lindorm can refer to any serpent or monstrous snake. The most recognisable of the lindorms in Norse myth is Jormungandr, or the Midgard Serpent. Generally, the word lindworm stood for the Latin word draco and thus could refer to any draconic creature.

The bestiary entry says the dragon once destroyed a kingdom. In the Japanese version the name of the country is the exact name of the dragon—Lindwyrm. In Japanese, the word Lindwyrm is virtually identical to Lindblum, ("rindovurumu" versus "rindoburumu", where the "bu" and "vu" sounds are almost the same and used interchangeably in many instances). This may be an intended reference to the country of Lindblum in Final Fantasy IX, or at least play on words.