Lindblum Castle, also known as the Lindblum Grand Castle, is a castle located to the southwest of the Mist Continent in Final Fantasy IX. It is home to Regent Cid Fabool IX, ruler of Lindblum. Lindblum Town itself is located within the castle's walls.

Zidane and his group arrive at Lindblum after narrowly escaping from Alexandria. Thanks to Garnet's relations with the Lindblum royalty, they are welcomed inside the castle where they learn Regent Cid has transformed into an oglop. While Zidane, Steiner and Vivi explore the town, Garnet remains in the castle, feeling helpless as to the rising tension between Alexandria and Lindblum. Zidane discovers her atop the castle, musing, and attempts to cheer her up by promising her a date if he wins the upcoming Festival of the Hunt.

The celebrations after the festival are cut short by the arrival of a heavily wounded soldier from the nation of Burmecia. Blinded and dying, he informs Cid of a black mage attack on Burmecia before keeling over, dead. Zidane and Vivi decide to venture out to Burmecia, accompanied by Freya, a Burmecian citizen and old friend of Zidane. Garnet wishes to go too, but she is opposed by her uncle and her friends. In retaliation, during the feast, she slips sleeping weed into everybody's food but hers and Steiner's, and flees the castle with him in the hopes of returning to Alexandria to speak with Queen Brahne. When the party awaken, they assume Garnet to have left for Burmecia.

Both groups fail in their quests, and after the destruction of both Burmecia and Cleyra, Queen Brahne turns her sights on Lindblum Castle, hammering it with a barrage from her seafaring fleet hidden beneath the Mist. She teleports armies of black mages directly into the city before ending the battle by summoning Atomos with one of the several jewels stolen from Garnet. Not long after, having witnessed the attack, Zidane, Garnet, and Vivi return to the stricken city to regroup and plan their counter attack. They devise a plan to defeat Kuja, Brahne's weapon supplier, who is said to have appeared from the north on a silver dragon.

After coming back from the Outer Continent, Garnet is made Queen of Alexandria, but after Alexandria is decimated by Kuja's Bahamut, Garnet, Zidane and the rest of their group are brought to Lindblum. Zidane searches for Garnet in the castle and finds her by the telescope, but she has lost her voice. Zidane tries to turn Cid back into a human by finding potions around the city but they only make him turn into a frog. They leave Lindblum for the Black Mage Village to search for Kuja.

After the party rescues Queen Hilda from Mount Gulug, they return to the castle where Hilda turns Cid back into a human. Cid, now a human, builds the Hilda Garde III. Garnet is missing and Zidane goes to Alexandria where her voice finally returns. After Garnet cuts her hair, they leave Lindblum using the new Hilda Garde III.

Approximately a year later, Cid, Hilda, and Eiko ride the elevator on the way to Alexandria to see I Want to Be Your Canary, having adopted Eiko as their daughter.

The upper level is restricted, as it is where the Regent resides. It consists of a conference room and the throne room directly above. The throne is mechanically operated and can ascend or descend to either room as the Regent sees fit. A staircase near the elevator leads to an observation point with a telescope.

The middle level of the castle comprises the airship workshops and the guest rooms. There is a Glass Armlet and save moogle in the guest room. The player can also enter the airship dock from here, and enter Lindblum town via the cable car. If the player inspects the fountain, Zidane will note that "there is nowhere to place a medal here". Since there are no puzzles, plot points, or anything else in the game related to this fountain, it can be assumed that this is just an allusion to the Capcom game Resident Evil 2.

The Base Level has fallen into disuse as it lies below the Mist. Two gates, Serpent and Dragon, lead to the harbor and outside respectively. Beyond Dragon's Gate is a moogle and a merchant, and the Blue Narciss can be boarded at the harbor. A treasure for Chimera Armlet is found at the landing site for Serpent's Gate as the Blue Narciss first becomes available.

Used to navigate throughout the castle, it can take the player to all three castle levels.

Zidane finds Garnet here, and together they look through the telescope at the landmarks and surrounding area of Lindblum. Six locations have to be located in order to proceed:

When the party first meets Mogki at the the guest room, he has received a letter:

He also gives a letter for the party to deliver to Atla at Burmecia:

When the party return to Lindblum from the Outer Continent the party delivers a letter from Mogki to Moodon:

After the party has saved Hilda and returned her to Lindblum to Cid, Mogki at the castle sends a letter to Kumool at Ipsen's Castle:

The theme that plays in Lindblum Grand Castle is "Cid's Theme", named after Regent Cid.

The stairs in the lobby have an unused background animation turning them into an escalator.

A dummied scene includes a part where Zidane must sneak into the occupied Lindblum Castle to meet with Cid and remain undetected. When an Alexandrian soldier spots his tail, Zidane pretends to be a cat to dispel the suspicion. Another scene shows the party meeting the oglop Cid at the castle basement, Cid exclaiming he has stopped the trolley between the basement and the Serpent's Gate to hinder the Alexandrian occupiers. He then hurries the party to another cable car, warning them of the Fossil Roo's mazelike structure, and gives the party an ancient map of the world from before it was covered in Mist.[1] 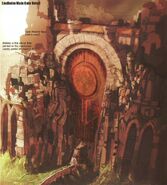 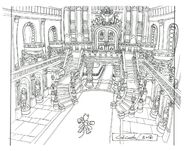 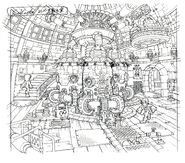 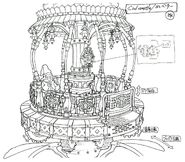 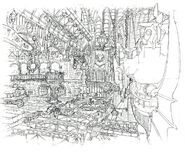 Artwork of the Port. 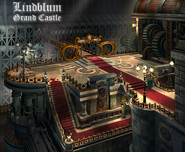 Conference room without the throne. 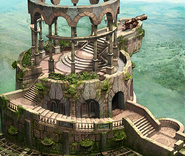 Concept artwork of the truck that travels around the Base Level of Lindblum Castle. 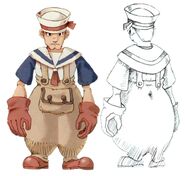 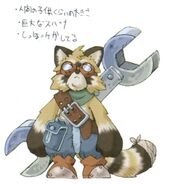 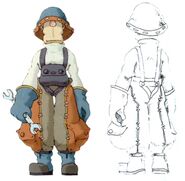 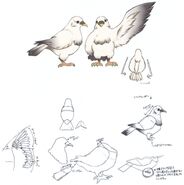 Concept artwork of the pigeons Garnet was found with atop Lindblum castle.