Cid Pollendina: Oh, shut up and help me remodel the Lindblum (Final Fantasy XIII) page!
Please expand this article into a full one. The following tasks need to be completed:

Cavalry base, docking base for all airships in the fleet

Cid Raines
The Lindblum is a Guardian Corps Cavalry airship under the command of Cid Raines in Final Fantasy XIII. This massive airship serves as a docking base for all the other airships in its fleet and base for the Cavalry.

Final Fantasy XIII Ultimania Omega reveals that the Palamecia is, in fact, a fal'Cie made into an airship. Whether the same is true for the Lindblum is unknown, but its shape does somewhat resemble the crest of Lindzei

as is common for Cocoon fal'Cie.

Due to the expansive area it patrols and the need for mobility, the Wide-area Response Brigade has no fixed base. The Lindblum is the command ship of the brigade and serves as both home and headquarters for its soldiers. It is heavily armed and armored for a Guardian Corps craft, but is easily outclassed by the anti-Pulse gunships built for the main PSICOM fleet.

At the end of Chapter 3, Oerba Yun Fang takes Snow Villiers on the Lindblum after he is captured. Cid meets with them, and although Snow is resistant, Fang restrains him and Cid takes his leave. Later, Fang and Snow descend into Palumpolum at the start of Chapter 7 with the aim of stopping Lightning and Hope's execution at the hands of Yaag Rosch and the Sanctum.

The Lindblum along with Rygdea shows up to save the group at the end of Chapter 7 when they find themselves cornered at the Estheim residence by Yaag. It bombards the PSICOM troops allowing the team to escape after having destroyed the Havoc Skytank.

At the beginning of Chapter 9, Sazh and Vanille have been taken prisoner on board the Palamecia and Lightning, Hope, Snow, and Fang intend to board it to help save them. For a brief period, it is possible to walk about on the main deck of the Lindblum before they depart with Rygdea for the Palamecia. 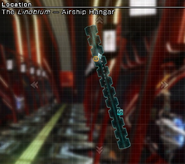 The Lindblum, with its wings folded.

The Lindblum and its supporting fleet. 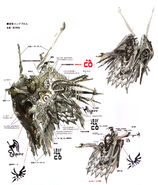 The airship takes its name from the regency of Lindblum from Final Fantasy IX, which was ruled by Regent Cid Fabool IX. Interestingly, both represent "the good" side in their respective games.