On a windswept isle in the southwestern corner of the realm, amidst the roiling waves of the Rhotano Sea, lies the maritime city-state of Limsa Lominsa. To this haven for bandits and brigands, cutthroats and curs, seekers of both freedom and fortune, comes a lone adventurer. Lone, yet not alone, for the hero's arrival has drawn the gaze of the nation's patron deity Llymlaen. What realm-shaking fate has She descried in the churning waters of this mortal's future? Through peril and hardship, discovery and triumph, may the Navigator guide this brave soul on [his/her](player character's gender) life's voyage... Till sea swallows all.

Limsa Lominsa is an independent marine city-state of Eorzea in Final Fantasy XIV. Located on the southern coast of the island Vylbrand, it is a bustling port and pirate hideout.

No man may tread upon me, for I am the sea.

On the southern coast of the island of Vylbrand, under the shadow of ancient cliffs worn by the relentless onslaught of the Rhotano Sea, lies the marine city-state of Limsa Lominsa. Said to be blessed by the goddess of navigation, Llymlaen, the city is spread out over countless tiny islands, each connected by sturdy bridges of iron and wood construction, earning her the name the "Navigator's Veil" from traveling bards who have witnessed the city's beauty from afar.

Limsa Lominsa is a traditional thalassocracy, with power lying in the hands of the ruling party and its leader, Admiral Merlwyb Bloefhiswyn. Its economy is driven by shipbuilding, fishing, and blacksmithing, but the majority of wealth comes from the lucrative shipping industry.

To maintain the safety of its maritime routes, the city employs a formidable navy known as the Knights of the Barracuda, but even in the waters nearby the city, pirate bands run rampant, raving and pillaging. Admiral Merlwyb reinstated the Maelstrom to combine the forces of the Knights, conscripted pirates, and adventurers into a land-and-sea army to combat the Garlean Empire and the encroaching Sahagin of the Indigo Deep.

An enclosure located by the Zephyr Gate leading to Middle La Noscea. A lift can transport adventurers to the Drowning Wench or the Airship Decks. A more secure lift also provides access to the Admiral's office in the Command Room.

This open square is where the city-state's Aetheryte Crystal is located, and where players starting at Limsa Lominsa begin. Players may (re)purchase starting racial gear from Brugaire Consortium members here.

The customs and excise agency for the city-state, which also functions as the Arcanists' Guild under acting guildmaster Thubyrgeim Guldweitzwyn. Players who wish use that class will want to visit here.

A ferry located to the west of this facility can take players to Vesper Bay in Western Thanalan. Additional ferries to Kugane and Old Sharlayan are also available upon making significant progress in the main scenario.

These wharfs contain both the Fisherman's Guild as well as a ferry that can take players to certain ports in La Noscea.

Registered as a trade vessel hailing from foreign waters, this battle-scarred warship captained by the lord of the region's underworld, One-eyed Hyllfyr, serves as a gathering place for brigands, cut-throats, and the purveyors of sundry other breeds of villainy. It is here that the city-state's many pirate crews find new recruits to join their ranks.

This pirate ship is located on the docks near Fisherman's Bottom. In 1.xx, it was the home of the Marauder's Guild, but that function has since moved to the Coral Tower.

A tavern and Adventurer's Guild, run by Baderon. Players starting in Limsa Lominsa will begin their journey from here. Inn and Levequest services are also available.

A lift can transport players to the Bulwark or the Airship Decks.

An importer carrying exotic goods, all privateered by Carvallain and his Kraken's Arms at the expense of Garlean vessels.

Named for a Bismarck, this establishment is one of the finest restaurants in Eorzea. It is also the home of the Culinarians' Guild, under guidance of Lyngsath.

This tower on the north end is the barracks and training facility for the Yellowjackets, the city-state's guard. They operate both the Marauders' Guild and a gunnery range.

A town square near the Tempest Gate leading to Lower La Noscea. A Delivery Moogle and a Linkshell Distributor can be found here.

The headquarters of the Maelstrom. Players who are affiliated with that Grand Company can obtain tasks, goods, and create a Free Company here.

Named after its founders Theor Naldiq and Bryce Vymelli, this company regroups the smithing guilds of Limsa Lominsa. The smiths of Limsa were impressed by the Kobold smithing techniques and quickly adopted them. In order to prevent further spreading that would put them at a disadvantage with the other city-states, the company ensured that the techniques were kept inside the city while also controlling the spread of the Lominsan products.

Following the opening of the city to adventurers, the arts of blacksmithing and armoring can be studied at the joint guildhall here.

A tavern run by pirate captain Rhoswen and her Sanguine Sirens.

Limsa Lominsa's climate may exhibit any of the following weather conditions:

Because of its distance from Ul'dah, Limsa Lominsa swiftly became sparsely populated after the game's launch. Efforts to expand Market Ward access and the addition of airships did little to bring crowds back to the Thalassocracy, making it a quiet, low-lag place to craft until 1.23 brought a new battle activity unique to the area called Skirmish.

While all regions have undergone drastic landscape changes, the city-states have remained decidedly untouched. The Aetheryte Crystal has moved from its original plaza to the Octant, and Maelstrom Command (like the other Grand Companies) is now under an open shelter. The entrance to the Market Wards has been converted to the Tempest Gate, leading to Lower La Noscea.

All three city-states now see a fair amount of traffic since the auction system can be accessed from any city, and many players favor Limsa Lominsa as their "home". The access to Limsa Lominsa's market board and retainer's bell is easily found right next to the main Crystal, freeing players a loading screen as opposed to other three cities.

"I Am the Sea" plays in Limsa Lominsa during the daytime and "A Sailor Never Sleeps" plays at nighttime.

Limsa Lominsa appears as the FMS for "On Westerly Winds". 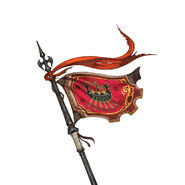 A ship in Limsa Lominsa port. 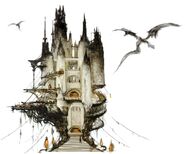 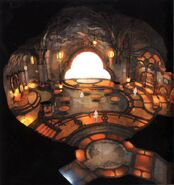