A rod fashioned from the tail of the lamia Lilith.

Lilith Rod (リリスのロッド, Ririsu no Roddo?), also known as Lilith's Rod, Rod of Lilith and Power Rod, is a recurring weapon in the series. It is usually a high-level rod.

Lilith Rod is the second-strongest rod for a Black Mage. It has an Attack power of 110, gives +20 to Intellect, and casts Death when used as an item. It is only obtainable once a Black Mage's job level reaches 99.

Lilith Rod (Witch Rod in Easy Type) grants +13 Attack, -40 Accuracy, +5 Intelligence, and drains HP from the target when attacking with it, but it is ineffective against undead enemies. It also casts Osmose when used as an item. It can be equipped by Rydia, Tellah, Palom, Fusoya. It can be dropped by Lilith and the Lamia Queen.

In the 3D versions, Lilith Rod provides 18 Attack, 80 Accuracy, +2 Intellect, and casts Osmose when used as an item during battle. It can be equipped by Golbez, if he is hacked into the party.

Lilith Rod has an attack power of 13 and a accuracy of -40 with a bonus of +5 Intelligence. It drains HP from the target when attacking with it, deals extra damage against undead and can cast Osmose when used as an item during battle. It can be equipped by Rydia and Palom, dropped by Lilith found in the Cave of Eblan and the Upper Section of the Tower of Babil.

The Lilith Rod 13 Attack, -40% Accuracy, +5 Intelligence, absorbs damage done to target as HP, and casts Osmose when used as an item. It can be dropped by Lilith and Lamia Queen. It can be equipped by Rydia, Palom, Leonora, Harley, and Golbez.

The Lilith Rod, also known as Power Rod, is a high-ranked rod that has a 25% chance to cast Osmose when attacking with it. It has an attack power of 27, a hit rate of 30, and gives a +3 boost to Magic. It can be found in the Interdimensional Rift and stolen from Farfarello. The weapon deals no damage, but has the same effect as the command Flirt.

The Lilith Rod is a club obtained from quest NM Lich C Magnus in the Eldieme Necropolis, available for use by all races. It increases MP by 10 and INT by 5 with the additional effect of draining MP. It has a damage value of 19 and delay of 288. It can be resold for 2295 gil, or desynthesized.

The Lilith Rod is the Zodiac Weapon for

Black Mages. It is acquired via the quest

His Dark Materia, by combining reagents acquired from assorted other side quests with a materia created from Stardust Rod Nexus, the final stage of the black mage's Relic Weapon. The Lilith Rod can then be upgraded to Lilith Rod Zeta, the most powerful Black Mage weapon in A Realm Reborn.

The Lilith Rod's secondary stats are determined by what the player chose to imbue in their Stardust Rod Novus, and can be redone by acquiring and imbuing a new Sphere Scroll: Stardust Rod from Hubairtin in Central Thanalan and presenting it to Jalzahn Daemir in the North Shroud.

Lilith Rod is a high-level rod that grants +40 Attack, +5 Magick, +2 Evasion, +10 Resistance, and teaches Lv.5 Haste to Arcanist. It can be bought for 12,000 gil in the shop after creating it in the Bazaar after using a Mind Ceffyl, Mysidia Alloy, and Magick Fruit. It must be remade after purchasing.

Just waving this weird rod at things makes them get all tuckered out and tired.

Lilith Rod grants +4 to Attack. It can be equipped by Black Mage, Magus, Time Mage, Summoner, Aerith, and Shantotto.

A rod created by a legendary witch and capable of stealing HP.

A rod that grants its wielder the ability to use the drain spell. Originally owned by a monster named Lilith, the rod seems to have absorbed some of its powerful magical energy while in its possession. It was believed to be exclusively used by these creatures from another world, but the recently opened path towards the Giant of Babel seems to have somehow transported it here.

Lilith Rod is a rod that provides 60 MAG and access to the spell Drain. It is obtained during the Final Fantasy IV event, "The Giant of Babel".

The rod said to have been used by Lilith, a night demon and bringer of nightmares who appears in many myths throughout the ages. She is said to come at night in a beautiful guise to slay children and expecting mothers.

In Bravely Default, Lilith's Rod provides 20 P.ATK, 20 M.ATK, 90 Aim, and casts Aspir when used as an item. It can be found in the Vampire Castle and Dark Aurora. 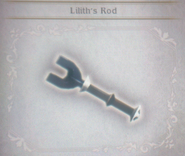 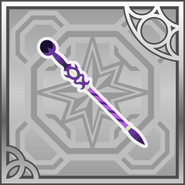 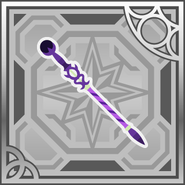 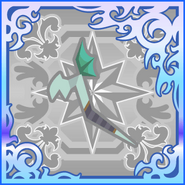 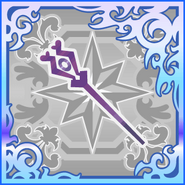 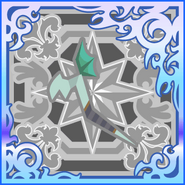 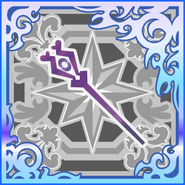