Your tainted souls defile my very being. Be scorched by the divine light!

Lilith Ascendant is the Final Boss of the Wings of the Goddess expansion in Final Fantasy XI. She is fought in the second half of the mission battlefield Maiden of the Dusk. Lilith Ascendant is the result of Lady Lilith absorbing Lilisette and her powers as a Champion of the Dawn, in a desperate attempt to win the conflict of the two realities.

Similar to Lady Lilith in the first half of the battlefield, Lilith Ascendant is aided by Elemental Gyves that appear in the battlefield after she uses a special ability. The element of the gyve depends on the element of the attack used. For example, Dark Burst causes a thunder Elemental Gyve to appear, but this is not differentiated in their names but the color they glow. The gyves will naturally despawn within a minute even if left alone. The presence of at least one Gyve in the battlefield causes Lilith Ascendant to gain a 15% Magical Damage Reduction.

Lilith Ascendant's normal attacks deal AoE damage, cause Knockback and remove Utsusemi images. She casts a wide range of enfeebling spells, of which Breakga is the most debilitating as it renders players unable to act at all for a short while. Her special attacks, while used often, come with some charge-up time, and can be preempted by players. She also has a move known as Dark Moon, which causes players to be inflicted with the weakened effect. This is the same as the effect they receive upon raising after being KO'd and one of the rare few abilities in the game capable of doing this. Pets, however, are not affected by this.

Starting from 50% HP, she will start using Dark Sun, which is a small-ranged AoE Death ability. This is preceded by a short message, giving time for players to run out of range. This is potentially a problem if players are bound, terrorized or petrified.

Players must also take caution in avoiding the Elemental Gyves, which emit auras that inflict status effects. Fortunately, the battlefield is relatively big enough for players to be able to avoid the Gyves and, especially for mages, stay out of range from Lilith Ascendant at the same time.

The music that plays when battling Lilith Ascendant, during the second half of the Maiden of the Dusk battlefield, is "Goddess Divine". It is featured in disc one of Final Fantasy XI Original Soundtrack - Plus. It is unique to this fight and was introduced in the same update as the final batch of missions for Wings of the Goddess (Dec 2010). It is worth noting that this track contains a melody that is also heard in the track "Wings of Dawn", used for the final promotional trailer for Wings of the Goddess. 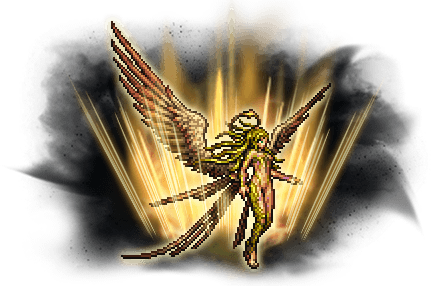 This section about an enemy in Final Fantasy Record Keeper is empty or needs to be expanded. You can help the Final Fantasy Wiki by expanding it.
Retrieved from "https://finalfantasy.fandom.com/wiki/Lilith_Ascendant?oldid=3239820"
Community content is available under CC-BY-SA unless otherwise noted.