Known as the 'Moonshade Butterfly', Lilisette is a newer dancer of Troupe Mayakov, of renowned grace and exotic beauty, due to to her mixed Hume and Elvaan heritage. However, she has been pursuing the mysterious being known as Cait Sith...

Lilisette is a non-playable character from Final Fantasy XI. She is considered a principal character in the Final Fantasy XI: Wings of the Goddess expansion, whom the central mission storyline revolves around. She is a graceful and elegant Dancer.

Lilisette is a young, redheaded girl with mixed Hume and Elvaan heritage, giving her an exotic appearance.

Lilisette is a traveler through the Cavernous Maws, trying to prevent her father, a knight named Sir Ragelise, from dying in battle. She has joined Troupe Mayakov, a dancing troupe performing in San d'Oria during the war. She tries, numerous times, to capture Cait Sith. The leader of the dancing troupe, Alexei Mayakov, often mispronounces her name with a lisp as "Lilithette." 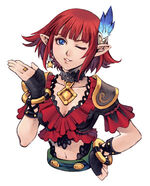 During her travels, she not only meets her father, but also her mother, Portia, who also works for the dance troupe. She meets Lady Lilith who reveals herself to be from an alternate version of Vana'diel, in which the Crystal War never ended. She tempts Portia to come with her, saying she can save Ragelise's life. The two leave together with Lilith calling Portia 'Mother.'

During an attack on the Shadow Lord's base, Lilisette and Ragelise rescue Portia, who is being held in one of Castle Zvahl. This later causes Ragelise to be discharged for disobeying direct orders regarding the attack on Zvahl. He and Portia leave to meet Lady Lilith.

When Lilisette and Cait Sith find Ragelise and Portia meeting with Lady Lilith, she reveals the future that Lilisette comes from is not real, but an illusion created by Altana, while her own future is the real one. That no one was strong enough to defeat the Shadow Lord, and their only hope was to make a pact with the same darkness they sought to defeat: Odin, the Dark Rider. She reveals herself to be that dimension's Lilisette, technically makes her Lilisette's sister. After defeating the Spitewardens Aquila and Haudrale, Lilisette witnesses her parents sign a contract with Odin out of despair and thus negate her existence.

After her parents are defeated, Lilisette returns to existence. Gaining a new understanding of Lilith, Lilisette tries to convince her to stop. After forced to defeat her with the adventurer's help, Lilisette lowers her guard while checking on Lilith's well being as her counterpart knocks her unconscious and absorbs her to obtain the girl's innate powers. That affects Atomos when he sucks Lilith in as she releases Lilisette while on the verge of dying and has her promise to restore the barrier between their dimensions and take her place. Accepting Lilith's request, Lilisette gives her goodbyes to the adventurer and Cait Sith as she seals Atomos from Lilith's world and become the new Lady Lilith.

Lilisette has appeared in the following games throughout the Final Fantasy series: 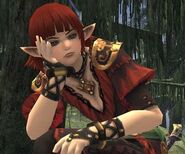 Waiting for the Cait Siths to make a decision. 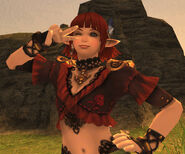 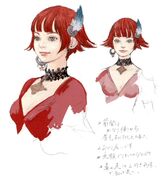 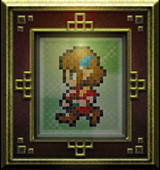 Lilisette depicted in the "Dancer Board" furnishing.