Only you can see me. You're special—you were the one who saved me! I am in your debt, and the Arbor folk never forget a debt.

Lilibelle is a non-player character from Final Fantasy: The 4 Heroes of Light. She is one of the fairies who live near the Great Tree in the city of Arbor.

Lilibelle is a small fairy with long green hair in pigtails that stick up tied with red ribbon bows. She wears a short green robe top and green bikini bottoms with long black gloves and a red bow on her chest. She wears a large gold bell with a brown strap around her body. She has blue wings and is barefoot.

Lilibelle is met at the Pirate Hideout, stuck on a vase stolen from Liberte. She only appears to Aire, as fairies only appear to their rescuers. Aire is shocked to meet the fairy, while Jusqua, who cannot see the fairy, thinks Aire is talking to herself, and ignores her. Lilibelle informs Aire that the whirlpool that appears at night at Liberte holds treasure.

Aire returns to Liberte and ventures into the whirlpool, ignoring Lilibelle and Jusqua's warnings of the dangers inside. At the bottom of the dungeon, Jusqua is fed up with Aire and returns to the town, leaving Aire and the fairy by themselves after defeating Brainshark. After Aire opens the treasure chest at the final room and is turned into a cat, both she and Lilibelle are launched into Liberte by the geyser.

Aire can only be understood by the fairy, and resorts to Lilibelle for a way to become human again. Lilibelle suggests they travel to her hometown of Arbor. Aire and Lilibelle leave Liberte, and travel to the desert of Guera through the Animal Burrow west of Liberte where they are confronted by the Ogre Bear who kills Aire, but Lilibelle drives it away and sacrifices herself to revive her companion, stating that an Arbor folk never forgets a debt, and gives Aire her wings.

After being sent decades into the past, the party finds Lilibelle trapped on a spider web in the Animal Burrow. The party frees her and takes her to Liberte. After the party returns to Liberte and speak with Pione, he will remark on how the fairy inspires him to work on his next masterpiece for the Glassworks Fair and Lilibelle agrees to help Pione.

The next morning disaster strikes as Captain Drake and his pirates loot Liberte of their artworks, kidnapping Pione and Lilibelle as well. Inside the Pirate Hideout, they find the possessed Captain Drake attempting to kill Lilibelle, but the party interrupts him just in time. After setting Drake free, Lilibelle decides to live in Liberte with Pione. 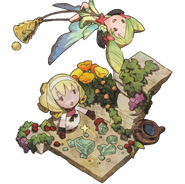 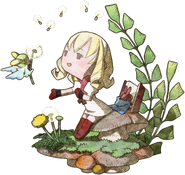