Lightning, the lead protagonist from the Lightning Saga, made a cameo appearance as a part of Square Enix's Final Fantasy Go There project.

The event was written by Motomu Toriyama, the director of the Lightning Saga.[1] New weapon designs were supervised by the Final Fantasy XIII team.[2]

Taverns across Eorzea are abuzz with talk of a mysterious warrioress slaying creatures then vanishing as quickly as she appears. With rumors spread so far and fast, I thought this was perhaps the foretelling of another great adventurer, an heir to the warriors of light. Brief dialogues with those who have glimpsed upon her, however, have regrettably left me with more questions than answers.

When asked to describe her appearance, my informants swore that her garments were unlike anything ever to be woven or forged in the realm. More concerning, however, was her weapon—a strange blade that also serves as a firearm. Far be it from this humble scribe to question one who would protect Eorzea's people, but only the Garlean Empire has been known to wield weaponry of such bizarre form and function. Coupled with battle prowess said to leave even the most accomplished of adventurers in awe, one cannot help but wonder where her allegiance lies.

Under the assumption we are dealing with an adventurer whose exploits have remained unnoticed, I took it upon myself to consult with the Adventurer's Guild. Surely, I surmised, a heroine of such high caliber would have registered with the guild before running headlong into dangers unknown. And yet, no matter which branch of the Adventurer's Guild I visited, the answer was the same. No one in their records matches the description of this nameless crusader.

With so much left unanswered, there is perhaps no better place to unravel this mystery than on the battlefields where she is said to appear. Stay alert on your travels, dear reader, that you may find the answer to the burning question on everyone's lips.

Chapter 1: For the Winsome[]

Petyr Winsome tasks the Adventurer with hunting monsters in the middle La Noscea so that he may write an article on Adventurer's experiences. While battling certain notorious monsters, Lightning appears and joins the fight.

Afterwards, she comments that she is not from this world and that the last thing she remembers is sleeping. She then disappears in a burst of white feathers, leaving behind otherworldly parcels as the only proof of her presence in Eorzea. When the parcels are taken back to Petyr Winsome and opened, strange gloves unlike anything present in Eorzea are found within.

In Ul'dah, Dural Tharal, editor of the Mythril Eye, wishes to find out more about the increasingly popular Lightning figure that has been sighted throughout Eorzea and so tasks the Adventurer with hunting her down in the eastern and southern stretches of Thanalan. While there, a huge, armored behemoth-like creature is discovered and Lightning quickly joins the fight once again.

After the battle, Lightning comments that the odd creature is like something from her own world, and wonders if it wandered into this world the same way she did. She then is surprised to find out that she does not vanish after the fight this time. She walks away, leaving behind a strange otherworldly parcel like the one before. When taken back to Dural Tharal and opened, the Adventurer finds leg-wear similar to the gloves from the previous encounter.

In Gridania, Kipih Jakkya, editor of The Raven, tasks the Adventurer with finding out more about Lightning, who is now being written about all over Eorzea. She was last seen heading towards Coerthas, and Kipih urges the Adventurer to track her down for her story. In Coerthas, Lightning is encountered battling a large Magitek-like machine in the snowfields around Whitebrim.

After helping her to defeat the strange machine, she mentions that she believes she was woken up and sent to Eorzea to be tested by "some insane god" in preparation for a future fight. Like the previous encounters, she leaves behind an otherworldly parcel that contains shoes of the same unknown make as the previous garments.

This time, after returning to Kipih Jakkya, Lightning unexpectedly shows up and talks with the Adventurer. She talks about all the strange people and places she has seen in this world, and how her sister and friends would love it here. Before leaving she states that even if it is her fate to fight, she will do it on her own terms, and not just as a weapon to be wielded by some god.

As soon as these are defeated, a giant Bahamut-like creature called the Aspect of Chaos appears and Lightning summons her world's version of Odin to fight by her side. After defeating the Aspect of Chaos, Lightning thanks Odin for his help and leaves the battlefield once again, suspecting this is the end of her time on Eorzea. Like the previous battles, an otherworldly parcel is left behind containing strange clothing.

When the Adventurer returns to Kipih with the parcel, Lightning is there and talks about how much she enjoyed her respite in Eorzea, and how it is a much less grim place than the world she comes from. She admires the Adventurer for living such a free lifestyle and swears she will follow their way of life no matter what gods may try and control her. She warns whatever gods may be listening that they will regret sending her to Eorzea and making her stronger.

As if the gods hear her challenge, she rises into the air and starts to vanish. She says she will probably not remember her time in Eorzea, and asks the Adventurer to remember it for her before vanishing in a cloud of feathers.

This event is comprised of multiple quests that will be released at the following times:

Allusions to the Lightning Saga[]

"Blinded By Light" plays when Lightning appears in the FATE. "Saber's Edge" plays during the battle with the Aspect of Chaos.

Lightning in a cutscene.

Lightning meets with the Adventurer in Eorzea.

Lightning as she appears in the game.

Lightning fights an army of Anubys during

Lightning returns to her world. 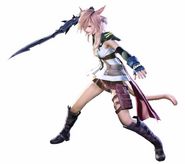 Render of Lightning costume with the Binding Rod. 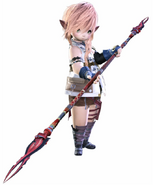 Render of Lightning costume with the Bladed Lance.

Render of Lightning costume with the Starseeker.

Render of Snow and Vega Knuckles.

Render of Snow with Grimoire Wing.

[view · edit · purge]Lightning strikes are electrical discharges on a massive scale between the atmosphere and an earth-bound object. The event name is named after the character Lightning from Final Fantasy XIII.